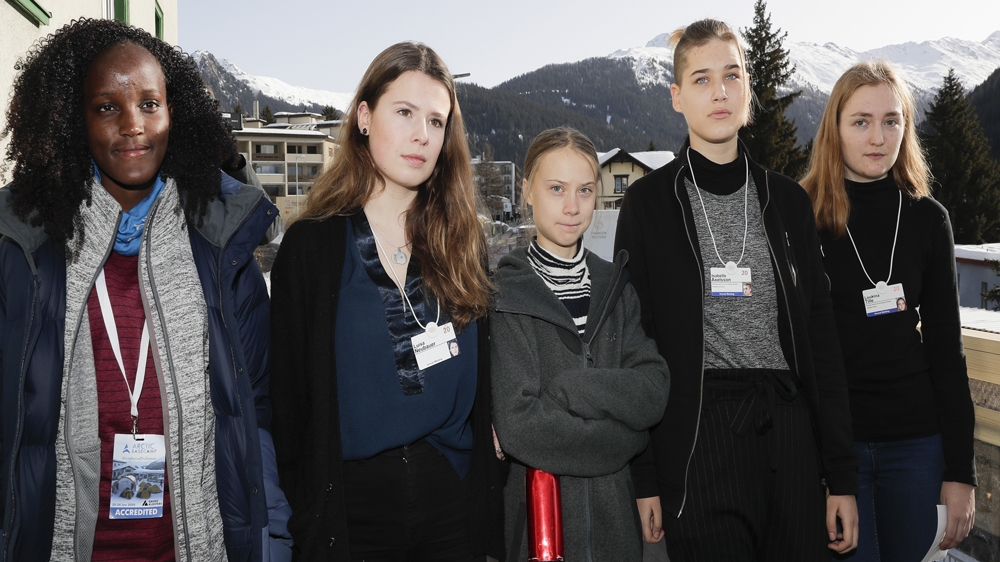 Following the backlash, AP removed the photo and replaced it with one showing all the activists [Markus Schreiber/AP]
Social media users have come out in support of Ugandan climate advocate Vanessa Nakate after she was cropped out of a photograph taken with her white peers in Davos.
Nakate accused the media of racism after The Associated Press news agency removed her from a photograph taken with fellow activists Greta Thunberg, Loukina Tille, Luisa Neubauer and Isabelle Axelsson.
The image was taken on Friday after the young campaigners gave a press conference in the Swiss resort, where they had been invited by the organisers of the annual World Economic Forum (WEF) whose agenda this year focused heavily on environmental issues.
More:

Racism in Portugal: A blind spot for the media?

Blackface: The ugliness of racism in Arab media

Simpsons actor Hank Azaria will not voice Apu after controversy

Nakate appeared shocked to find out that she had been removed from the photograph.
“I was cropped out of this photo! Why?” Nakate asked on her Twitter account on Friday.
“You didn’t just erase a photo. You erased a continent. But I am stronger than ever,” said the 23-year-old, who posted an almost 11-minute-long video on the social media platform.

Share if you can What it means to be removed from a photo! https://t.co/1dmcbyneYV
— Vanessa Nakate (@vanessa_vash) January 24, 2020

Following her post, Twitter users expressed their anger at the news agency’s move and urged it to remove the cropped photograph and share one of all the activists.

Advertisement. Scroll to continue reading.
BackPage 1 of 2Next →
In this article:Anger, Ugandan