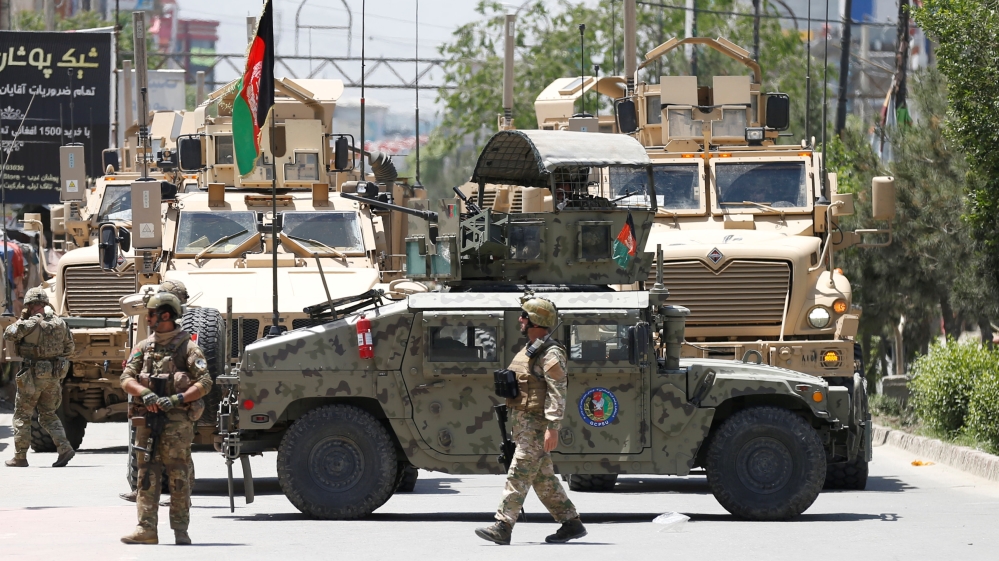 Afghan President Ashraf Ghani has ordered the military to move to an “offensive mode” against the Taliban and other armed groups after dozens of people, including newborn babies, were killed in two separate attacks in the war-ravaged nation.
“I am ordering Afghan security forces to switch from an active defence mode to an offensive one and to start their operations against the enemies,” Ghani said in a televised address on Tuesday.
More:

At least 24 people were killed – including newborns and nurses – when gunmen stormed a maternity hospital in the capital, Kabul early on Tuesday, officials said
Shortly afterwards, the ISIL (ISIS) armed group claimed it carried out a suicide blast at a funeral in the country’s restive east, which left two dozen mourners dead.
“Today, we witnessed terrorist attacks by the Taliban and Daesh groups on a hospital in Kabul and a funeral in Nangarhar, as well as other attacks in the country,” Ghani said, using the Arabic acronym for ISIL.
The US-Taliban deal
The Taliban, which signed a peace deal with the US in February, denied its involvement in the attacks.
Ghani’s move came months after Afghan forces pledged to only react defensively to Taliban’s attacks since the deal was signed in the Qatari capital Doha.
The Afghan president said offensive operations were needed to “defend the country, safeguard our countrymen and infrastructure, and to repel attacks and threats by the Taliban and all other terrorist groups”.
In a statement on Wednesday, the Taliban warned it was “fully prepared” to counter any offensive by Afghan forces.
“From now onwards the responsibility of further escalation of violence and its ramifications shall fall squarely on the shoulders of the Kabul administration,” it said.

National Security Advisor Hamdullah Mohib said on Twitter: “There seems little point in continuing to engage Taliban in peace talks.”
The latest killings raise new questions about the fate of a hoped-for peace process that is teetering as Afghanistan grapples with a public health crisis due to the coronavirus.
The Taliban have largely refrained from launching major attacks on Afghan cities and American interests since the February deal meant to pave the way for peace talks with the Kabul government.
But the so-called intra-Afghan talks hit a wall as a prisoner swap – a key part of the Doha deal – was delayed as the Ghani administration refused to release 5,000 Taliban prisoners in one go.
So far, the Afghan government has released nearly 1,000 Taliban prisoners while about 100 government prisoners have been set free by the Afghan armed group.
The accord will also see all US and foreign forces quit Afghanistan over the next year. Thousands of US troops have already pulled out, while a further 8,600 are expected within months.
‘Big blow’ to the peace process
In a statement, US Secretary of State Mike Pompeo condemned “the two horrific terrorist attacks” in the strongest terms, and noted that the Taliban had denied responsibility and said the lack of a peace deal left the country vulnerable to such attacks.
“The Taliban and the Afghan government should cooperate to bring the perpetrators to justice,” Pompeo said.
The violence came just a day after four roadside bombs exploded in a northern district of Kabul, wounding four civilians including a child. Those bombings were later claimed by the ISIL group.
Victoria Fontan, professor of peace studies at the American University of Afghanistan, said the latest violence was a “big blow to the peace agreement”.
“It shows again that the Taliban can’t deliver on their promises and so I would say that today marks a milestone towards the disintegration of the agreement unless drastic measures are taken immediately by all sides, especially the Taliban,” she told Al Jazeera.
Mothers, newborns killed
Tuesday’s first attack saw gunmen storm the Barchi National Hospital as parents brought infants and children for appointments.
The death toll rose to at least 24 people from 16 on Wednesday, Deputy Health Minister Waheed Majroh said, with 16 others wounded.
The three attackers were eventually killed in a lengthy clearance operation. Heavily armed security forces were seen carrying infants – at least one wrapped in a blood-soaked blanket.

“The fatalities also include mothers and nurses,” interior ministry spokesman Tareq Arian said.
More than 100 – including three foreign nationals – were rescued, he said.
One of the wounded, Jamila, said she had taken a grandchild to the hospital for some vaccinations.
“We were outside the hospital. I wanted to go inside when they shot me, and one of my grandchildren was killed,” said Jamila, who only gave one name.
The hospital is in a neighbourhood that is home to Kabul’s minority Shia Hazara community – a frequent target of the ISIL fighters.

The hospital is supported by the humanitarian organisation Doctors Without Borders (Medecins Sans Frontieres, or MSF), and a number of foreigners work there.
“It beggars belief that such a heinous act could be committed when Afghanistan is being ravaged by the COVID-19 pandemic,” UN Humanitarian Coordinator Toby Lanzer said.
About an hour later, a suicide bomber killed at least 24 people at the funeral of a local police commander in eastern Nangarhar province, provincial spokesman Ataullah Khogyani said.
The attacker detonated explosives in the middle of the ceremony.
“We were preparing [to stand in line for the funeral] when I heard a big blast and then saw hundreds of people on the ground,” said Zabit Amir, a mourner at the funeral, which others said was attended by thousands.
“I did not even know who was alive or dead there.”
Continue Reading…

US to Israel: Be circumspect on annexation of occupied West Bank