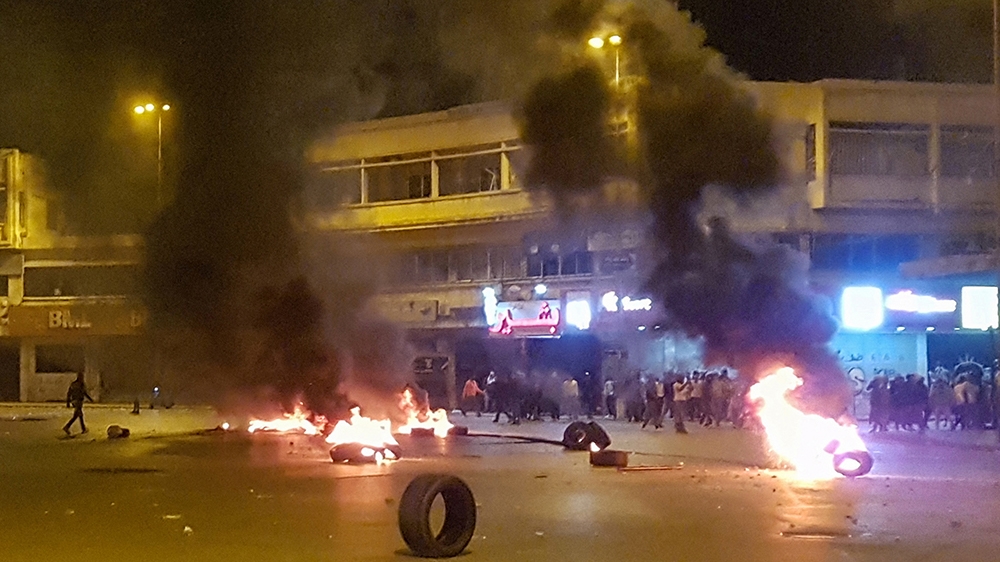 Beirut, Lebanon – At least a dozen Lebanese banks across the country have been torched and vandalised during the second consecutive night of angry protests fuelled by frustration over the national currency’s unfettered depreciation.
Hundreds of demonstrators took to the streets and dozens were arrested by security forces.
The largest and most violent protests took place in the northern city of Tripoli – Lebanon’s second-largest, and poorest, city, after protester Fouaz al-Semaan died on Tuesday from wounds sustained while protesting the night before.
More:

One dead, dozens injured in Lebanon riots with banks smashed

Lebanon’s protests are far from over

The 26-year-old man’s sister said the Lebanese army shot him. The military expressed its “regret” over the killing without directly claiming responsibility and said it has launched an investigation.
Protesters in Tripoli began setting banks on fire on Tuesday afternoon after the al-Semaan was buried, and clashes continued into the early morning on Wednesday as they were chased through the streets by soldiers.
In southern Sidon, a branch of the central bank was pelted with at least half a dozen petrol bombs, while banks were also set on fire in Beirut and the southern city of Nabatieh.
Protesters are furious over the rapid slide of the Lebanese pound, which has plummeted in value by more than 50 percent in about six months.
Massive anti-government protests that began in October and paused during a nationwide coronavirus lockdown that began in March are now returning angrier and more desperate.
While Lebanese flags used to be ubiquitous in mixed crowds of families with children, increasingly it is young men and women who are taking to the streets, rocks and Molotov cocktails in hand.

Several global banks moved large sums of allegedly illicit funds over a period of nearly two decades, despite red flags about the origins of the money, BuzzFeed and other media have reported, citing confidential documents submitted by banks to the United States government. The series of news reports on Sunday was partly based on documents,… 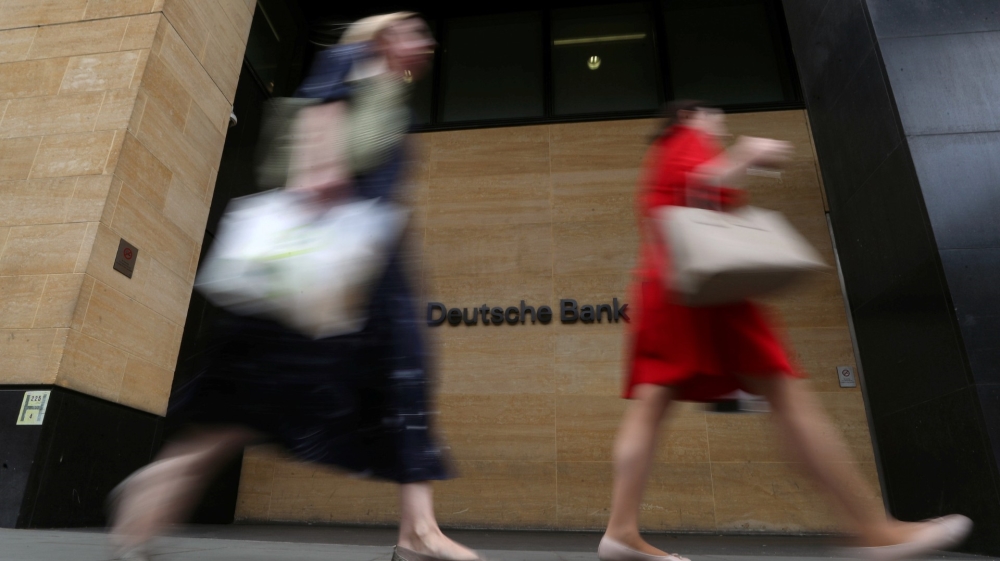 Several global banks moved large sums of allegedly illicit funds over a period of nearly two decades, despite red flags about the origins of the money, BuzzFeed and other media have reported, citing confidential documents submitted by banks to the United States government.
The series of news reports on Sunday was partly based on documents, called suspicious activity reports (SARs), filed by banks and other financial firms with the US Department of the Treasury’s Financial Crimes Enforcement Network (FinCEN).
The SARs, which the reports said numbered more than 2,100, were obtained by BuzzFeed News and shared with the International Consortium of Investigative Journalists (ICIJ) and other media organisations.
In all, the ICIJ reported that the files contained information about more than $2 trillion worth of transactions between 1999 and 2017, which were flagged by internal compliance departments of financial institutions as suspicious. The SARs are in themselves not necessarily proof of wrongdoing.

The unchecked movement of dirty money may not register as an immediate threat – especially given the coronavirus pandemic and all that 2020 has delivered.But @willfitzgibbon explains how it doesn’t just harm real people – it can kill them. https://t.co/GxOWP4ZkjR #FinCENFiles
— ICIJ (@ICIJorg) September 20, 2020

Five global banks appeared most often in the documents – HSBC, JPMorgan, Deutsche Bank, Standard Chartered and Bank of New York Mellon (BNY Mellon), the ICIJ reported.
A bank has a maximum of 60 days to file SARs after the date of the initial detection of a reportable transaction, according to the Treasury Department’s Office of the Comptroller of the Currency.
Delay in reporting
The ICIJ report said that in some cases, the banks failed to report suspect transactions until years after they had processed them.
The SARs also showed that banks often moved funds for companies that were registered in offshore havens, such as the British Virgin Islands, and did not know the ultimate owner of the account, the report said.
Among the types of transactions highlighted by the report: funds processed by JPMorgan for potentially corrupt individuals and companies in Venezuela, Ukraine and Malaysia; money from a Ponzi scheme moving through HSBC; and money linked to a Ukrainian billionaire processed by Deutsche Bank.
In a statement to Reuters news agency, HSBC said “all of the information provided by the ICIJ is historical”.
The bank said that as of 2012, “HSBC embarked on a multi-year journey to overhaul its ability to combat financial crime across more than 60 jurisdictions.”
Standard Chartered said in a statement to Reuters, “We take our responsibility to fight financial crime extremely seriously and have invested substantially in our compliance programmes.”

BNY Mellon told Reuters it could not comment on specific SARs.
“We fully comply with all applicable laws and regulations, and assist authorities in the important work they do,” the bank said.
JPMorgan did not immediately respond to a request for comment but said in a statement to BuzzFeed that “thousands of employees and hundreds of millions of dollars are devoted to helping support law enforcement and national security efforts”.
Deutsche Bank said in a statement on Sunday that to the “extent that information referenced by the ICIJ is derived from SARs, it should be noted that this is information that is pro-actively identified and submitted by banks to governments pursuant to the law.”
FinCEN said in a statement on its website on September 1 that it was aware that various media outlets intended to publish a series of articles based on unlawfully disclosed SARs, as well as other documents, and said that the “unauthorized disclosure of SARs is a crime that can impact the national security of the United States”.
Representatives for the US Treasury did not immediately respond to an email for comment on Sunday.
Continue Reading…