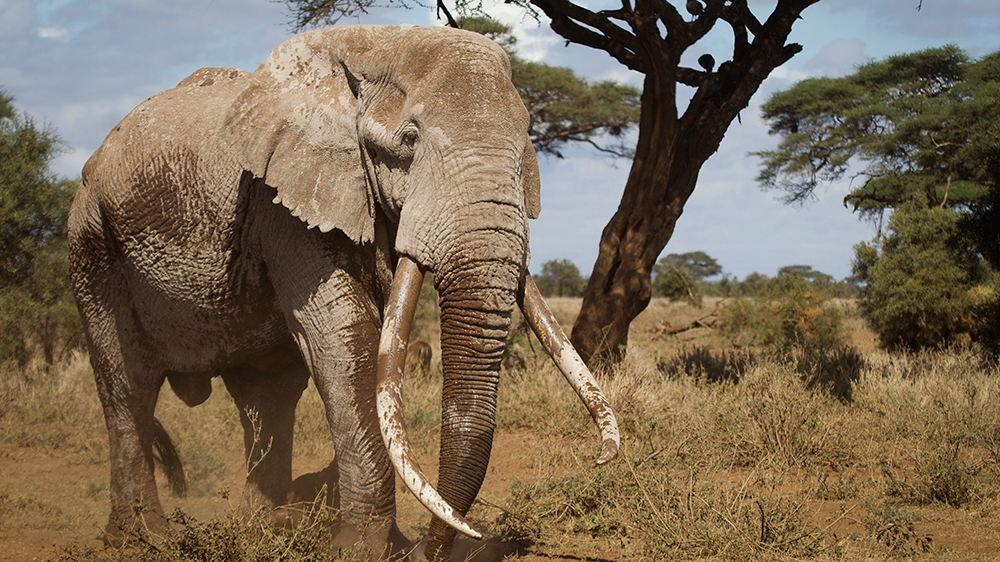 Big Tim’s body is being transported to Nairobi, where a taxidermist will preserve it for display at the national museum [Ryan Wilkie/Save the Elephants]
One of Africa’s last remaining giant “tusker” elephants has died in Kenya aged 50, the country’s wildlife service (KWS) said.
Big Tim died in Mada area of Amboseli National Park from natural causes, KWS said in a statement on Wednesday.
More:

The battle against wildlife poachers is increasingly hi-tech

“The celebrated elephant died early on Tuesday morning aged 50,” the statement said.
He was “a benevolent, slow-moving preserver of the peace at Amboseli,” KWS said. “He was well known and loved throughout Kenya.”
Big Tim’s carcas was found at the foot of the snowcapped peak of Kilimanjaro, the Amboseli Trust for Elephants said. An elephant is technically a “tusker” when its ivory tusks are so long that they scrape the ground. Usually, only old bull elephants grow their tusks long enough to reach this acclaimed status.

But conservationists estimate only a few dozen such animals with tusks that size are now left on the continent due to poaching.
Animals with the biggest ivory and elephants with the heaviest tusks are most at risk from poachers.
Tim was named by researchers who called each elephant in the family herd they were monitoring by the same letter to help identify them; Tim was a member of the ‘T’ herd.
The giant pachyderm once roamed outside the national parks into farming lands and had survived poachers and angry farmers.
Vets once treated him for a spear that had gone through his ear and snapped off into his shoulder.
“Our hearts are broken,” said Wildlife Direct, a Nairobi-based conservation campaign group.
“Tim was one of Africa’s very few Super Tuskers, and an incredible elephant whose presence awed and inspired many. He was one of Kenya’s National Treasures.”
Big Tim’s body is being transported to the Kenyan capital Nairobi, where a taxidermist will preserve it for display at the national museum, KWS said.
Poaching has seen the population of African elephants plunge by 110,000 over the past decade to just 415,000 animals, according to the International Union for Conservation of Nature (IUCN).