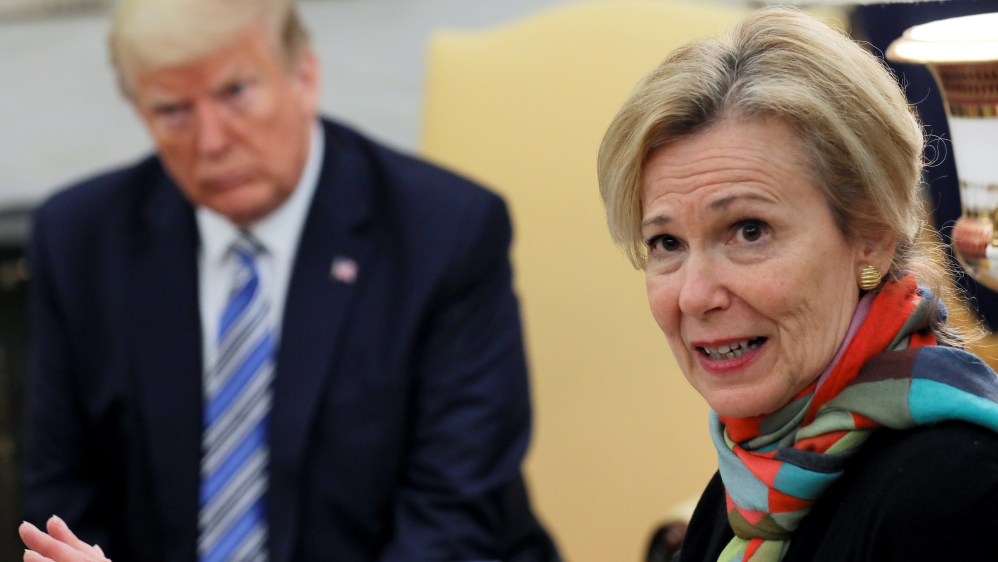 Dr Deborah Birx, response coordinator for the White House coronavirus taskforce, has warned against US citizens gathering in public spaces again as the number of COVID-19 infections topped 1.1 million in the country and the death toll rose to more than 67,000 on Sunday.
Birx said massing on beaches was not safe unless people kept at least two metres (six feet) apart, and weighed in against allowing such businesses as beauty salons and spas to reopen in the first phase.
More:

COVID-19: In charts and maps

Will warmer weather slow the spread of coronavirus?

“We’ve made it clear that that is not a good phase one activity,” she said on Fox News Sunday.
Protesters gathering, as they did last week in Michigan and other parts of the country to demonstrate against stay-at-home restrictions, pose a huge risk, she said.
“It’s devastatingly worrisome to me personally if they go home and infect their grandmother or their grandfather who has a comorbid condition and they have a serious or a very – or an unfortunate outcome, they will feel guilty for the rest of our lives,” Birx said.
Warm weather and gatherings
Her comments came as sunny days and warm weather proved to be challenging to manage as about half of US states partially reopen their economies after the coronavirus lockdown.
On Saturday, thousands of people gathered on the National Mall in Washington to view a US Navy flyover to honour healthcare workers and others battling the pandemic.
Last week, California ordered beaches in Orange County to close, after crowds defied public health guidelines to throng the popular shoreline. That prompted protests by demonstrators who accused the state’s Democratic governor of overreach.
New York City Mayor Bill de Blasio said there are “some real issues” near the pier and police would increase patrols.
‘Mixed bag’ results
Scott Gottlieb, a former Food and Drug Administration commissioner, said on Sunday that the country was seeing a “mixed bag” of results from coronavirus mitigation efforts.
He said there were about 20 states that are seeing a rising number of new cases including Illinois, Texas, Maryland, Indiana, Virginia, North Carolina and Tennessee. Virginia reported a record number of deaths on Sunday, up 44 for a total of 660.

“We expected that we would start seeing more significant declines in new cases and deaths around the nation at this point. And we’re just not seeing that,” he said on CBS’s Face the Nation.
“If we don’t snuff this out more and you have this slow burn of infection, it can ignite at any time.”
Even in the face of rising cases, some US citizens are eager to return to socialising and large gatherings – including sports.
The National Football League said it would announce its schedule for the upcoming season this week including its season-opening game on September 10 and the Super Bowl, which is scheduled to be played in Tampa, Florida, on February 7.
“We are planning on playing the 2020 NFL season as scheduled,” NFL spokesman Brian McCarthy said in an email, noting they will adjust to government regulations.
On the other side of the spectrum is Boston Mayor Marty Walsh in Massachusetts, which has not begun reopening and is seeing coronavirus cases still climbing. Massachusetts also has issued a statewide order telling people to wear masks in public.
He said the rallies against coronavirus mitigation efforts were causing confusion and making his job harder.
“I don’t understand it. That makes messaging really confusing … It’s the wrong message, because we’re still very much in the beginning days of coronavirus. Even if you’re a state that is seeing numbers go down,” Walsh said.
“If we’re not smart about the way we do things, those numbers could turn around and go right back up again.”
As Texas becomes one of the leading states pushing for its businesses to reopen, Dallas Mayor Eric Johnson said people appear to be obeying the new rules.
“People have not been rushing back into these restaurants and they have not been rushing back into the areas of the economy that the governor reopened on Friday,” he told CNN. “What we are seeing is people sort of putting their toe back in.”
New Yorkers fined for violations
In New York City, the warmest weather yet this spring caused picnickers and sunbathers to flock to green spaces in Manhattan, including crowded conditions at Christopher Street Pier in Greenwich Village, according to photos on social media.
Dozens were meanwhile fined for violating coronavirus social distancing guidelines, police said Sunday.
NYPD Commissioner Dermot Shea told reporters that officers had issued 51 summonses on Saturday, mostly for social distance violations, as temperatures in the US’s COVID-19 epicentre registered upwards of 70 degrees Fahrenheit (21 degrees Celsius).
Residents of NYC, which has been shut down since mid-March, are allowed outside to exercise providing they maintain six feet of distance and wear a mask when around others.
New Yorkers can be fined up to $1,000 for violating the orders, which many did as they descended on popular spots like Manhattan’s Central Park and Rockaway Beach in Queens following a largely rainy week.
Shea said tickets were issued to 43 people in parks and eight others elsewhere as New York leaders warned residents not to spark a second wave of infections.
Commenting on the situation, Governor Andrew Cuomo said: “How people cannot wear masks is disrespectful. It’s disrespectful to the nurses, the doctors, the people who have been front-line workers, the transit workers.
“You wear the mask not for yourself – you wear the mask for me,” he added.
Cuomo reported 280 new deaths from COVID-19 in New York state in the last 24 hours, down from 299 the day before.
More than 700 New Yorkers were dying daily at the peak of the outbreak last month.

Targeted by Duterte, fate of Philippines’ ABS-CBN in the balance