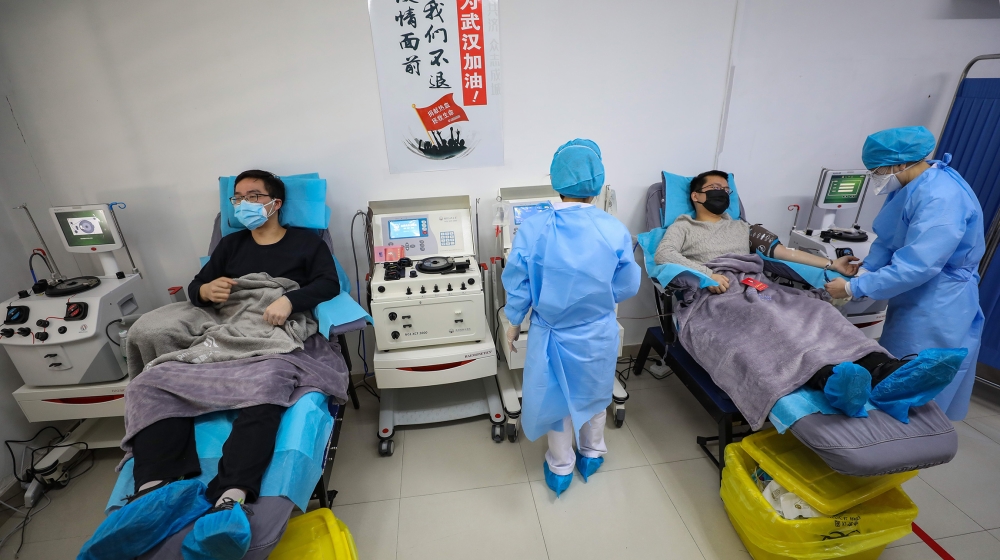 Chengdu, China – Scrambled eggs with tomatoes – that’s the first dish coronavirus survivor Yangyang, 28, made for herself after being discharged from No 7 Hospital in Wuhan, in Hubei province – the epicentre of the outbreak in China.
“This is the first time I thought eggs were so delicious,” Yangyang wrote on social media. “All the other friends who are still fighting in the hospitals – I can’t wait to see you all very soon!”
More:

For one family, neither treatment nor closure in virus-hit Wuhan

After escaping what she describes as a near-death experience, Yangyang is now one of the estimated 14,000 people in mainland China who has beaten the virus.
Despite the number of infections reaching almost 75,000 on Wednesday, some reassuring news is finally emerging out of China – that a growing number of people can and do survive the illness.
On Monday, the World Health Organization chief, Tedros Adhanom, had also said that based on Chinese medical data, four out of five patients in mainland China have mild symptoms and are expected to recover.

“I hope this trend offers people battling the disease across the country a beacon of hope and the courage to continue the fight,” Yangyang said.
However, there is still a mammoth gap between the rates of recovery in Hubei compared with other provinces.
In other Chinese provinces, the recovery rate has been steadily climbing to nearly 40 percent as of Wednesday, whereas the rate for Hubei is still below 15 percent.
Turned away
Yangyang’s road to recovery, like many others in Wuhan, was anything but smooth.
Just over two weeks ago, on February 2, she posted a plea for help on Weibo, China’s social media platform.
Both Yangyang and her father were infected with the virus, but due to the severe shortage of hospital beds, the facility turned them both away on multiple occasions.
“I’m helpless! Helpless!” she wrote on social media.

“No RNA test kits were available at the beginning and after almost a week, I finally got the test and received a positive result, then the hospital said I needed two consecutive positive results to be admitted!”
“I don’t know what to do! We don’t want to die!” she continued.
Luckily, her post worked in her favour. After her social media post garnered widespread attention, she received a phone call instructing her to proceed to Wuhan No 7 Hospital for her treatment. Two days later, her father was also admitted.
Grateful for help
During her treatment, she said the hospital was crammed to the gills so she had to share the ward with five other patients. But she said she did not mind.
“I was super-grateful that I could get a bed already, so why would I even complain about the packed wards?” she told Al Jazeera.
But Yangyang worried about the others who were sick who were not as lucky as her.

“I can’t imagine what would’ve happened if I didn’t receive that phone call from my community representative,” she said. “I’m sure there were loads of people whose conditions worsened significantly before they could even see a doctor.”
Experts, including Dr Zhong Nanshan, the doctor who first confirmed the human-to-human transmission case, have cautioned about the rapid progression of the disease in some instances.
“In places outside Hubei, early interventions had proven effective at curbing the disease’s progression. But in Hubei, this was not achieved at the beginning.”
Life-or-death situation
Peng, a 34-year-old woman who preferred to be identified only by her family name, was one of those who did not get treatment early enough.
She first developed symptoms on January 27 but only got admitted to hospital a week later after showing signs of breathing difficulties.
When she checked into the ward, she actually thought she might not make it.

But after getting intensive care, her condition stabilised.  And two weeks later she was discharged – after testing negative for the virus twice.
In a phone interview with Al Jazeera, Peng said that she has now put herself under self-quarantine for 14 days despite being out of the hospital.
“Seeing nurses with hazmat suits and other protective equipment coming in and out of the ward was surreal at the beginning,” Peng said.
Why self-quarantine
Peng still remembers the patients hooked up to beeping machines and her own belaboured breathing through an oxygen mask interrupting the eerie silence of her hospital room.
“When this epidemic is over, I will go back to Wuchang Hospital to say ‘thank you’ to all the people who took care of me in person. Those medical workers gave me my second life.”
The majority of the patients who have so far recovered have not developed any severe symptoms. Some who did not manage to get admitted would get daily injections at the facility.

Wu Junkang, a 47-year-old man from Wuhan, tested positive for the virus on February 4. Failing to find a hospital bed, he self-quarantined himself immediately.
“Of course, I get paranoid every day,” Wu told Al Jazeera, explaining about how he took care of himself.
“My body temperature had been fluctuating pretty frequently, so one morning I’d get 38.5, the next day 37.2, and then the third day 39.1 – I couldn’t take my mind off this.”
Recovering alone
During his 14 days at home, he would go to Wuhan Hankou Hospital for injections every day before the doctor told him to stop going – he had beaten the virus.
“I was a bit surprised at first because according to my CT scan, there are still signs of infection on my right lung,” Wu said.
“But my doctor told me that since I no longer have symptoms and have tested negative for my virus RNA test, I can go home and let my own immune system fight off the infection.”
A number of people who had recovered told Al Jazeera that doctors in Hubei would routinely turn those who only displayed mild signs of the disease away.

In response to Al Jazeera’s query about the handling of outpatients, a doctor at the Wuhan Red Cross Hospital said in order for patients with a residual lung infection to get a clean bill of health, they must meet two criteria: they should not have any symptoms, including fever or cough and should pass the coronavirus test twice.
The doctor,  who requested anonymity, also said all patients, who self-quarantined and had recovered, must stay at home for a further 14 days. But they are required to report to a doctor immediately should any symptoms return.
As for Yangyang, who managed to recover on her own and later had a CT scan said the examination showed her lungs were healthy.
And now she wanted to pay the help she had received forwards.
“I heard that the plasma of the people who have recovered from the virus could be very helpful in treating other patients,” Yangyang said, referring to the colourless fluid part of the blood.
“I’m going to donate as soon as I finish my 14-day quarantine – this is the least I can do to help now.”
Continue Reading…