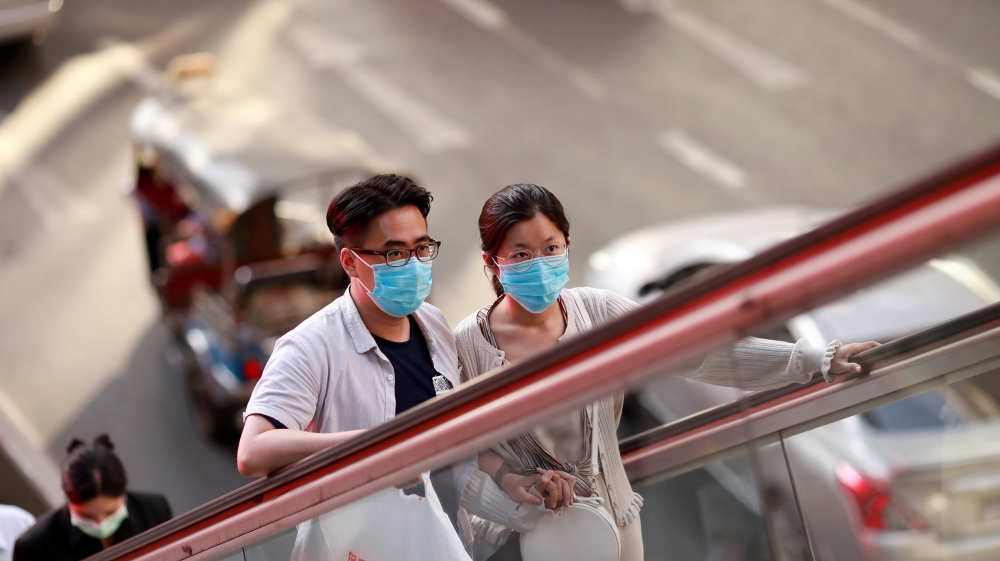 China and countries around the world are scrambling to contain the spread of a new coronavirus that has killed at least 106 people and infected more than 4,500.
Germany has reported its first case of the virus, as the United States and Canada upgraded travel warnings to advise their citizens to avoid all non-essential travel to China.
More than 56 million people in almost 20 Chinese cities – including Wuhan, capital of Hubei province and the epicentre of the virus – have been prevented from travelling in an attempt to curb the spread of the virus during the Lunar New Year or Spring Festival, traditionally China’s busiest travel season.
More:

Coronavirus: All you need to know

Trapped in Hubei: A family caught in an unexpected quarantine

The director-general of the World Health Organization (WHO), Tedros Adhanom Ghebreyesus, is currently in China.
The agency has acknowledged the respiratory illness is an emergency in China but said last week it was too early to declare the outbreak a public health emergency of international concern. It has described the global risk from the virus as high.
Here are the latest updates:
Tuesday, January 28
France reports fourth coronavirus case
An elderly Chinese tourist in a “serious condition” in a Paris hospital is France’s fourth confirmed case of the new coronavirus that has killed more than 100 people since it emerged in the Chinese city of Wuhan, France’s top health official said.
The man, visiting France from the hard-hit Chinese province of Hubei, was being treated in intensive care by medical staff, health director general Jerome Salomon told reporters in the capital.
China agrees to WHO sending experts to study virus
China has agreed that the World Health Organization will send international experts there as soon as possible to increase understanding of a new coronavirus and guide the global response to the outbreak, the UN agency said.
In a statement after a two-day visit by WHO director-general Tedros Adhanom Ghebreyesus, who met Chinese President Xi Jinping as well as the health and foreign ministers, it said that a better understanding of the virus’s ability to spread from person to person was urgently needed to advise other countries.
“The discussions focused on continued collaboration on containment measures in Wuhan, public health measures in other cities and provinces, conducting further studies on the severity and transmissibility of the virus, continuing to share data, and for China to share biological material with WHO,” the WHO said.
“The two sides agreed that WHO will send international experts to visit China as soon as possible to work with Chinese counterparts on increasing understanding of the outbreak to guide global response efforts,” the WHO added, without giving a timeframe.
EU to evacuate hundreds of citizens from China
The European Union is dispatching two flights to evacuate at least 350 healthy European citizens from the Chinese city of Wuhan.
The 28-nation union activated a disaster-response mechanism to organise the flights at the request of France, which has a large number of citizens in the Wuhan region.
The initial flights will only carry healthy EU citizens or those without symptoms of the virus, the European Commission said in a statement. It said the EU is ready to mobilise further flights in the coming days.
The first flight will carry about 250 French citizens. More than 100 other EU citizens will travel on the second flight. The EU will cofinance the flights.
US prepares to airlift citizens out of Wuhan
The US government chartered a plane to fly out diplomats from the US Consulate in Wuhan, where the outbreak started, along with other Americans.
Four people quarantined in Ethiopia over coronavirus fears
Ethiopia said it has quarantined four people suspected of contracting the novel coronavirus.
The suspected cases were identified through a screening conducted at the Addis Ababa Bole International Airport and the four have been quarantined at the Bole Tafa centre, the Ethiopian health ministry and Public Health Institute said in a joint press statement.
“All four suspects came from Wuhan city in Hubei province in China where the virus is taking the biggest toll and where it was first identified,” it said.
“The specimen[s] from the four suspects have been sent to South Africa for further examination,” the statement said.
US asks China for ‘more cooperation and transparency’ on virus
US Health Secretary Alex Azar urged China to be open and transparent about the new coronavirus that has hit the country, while also saying travel restrictions must remain an option on the table.
Azar said the US was offering Beijing assistance.
“We are urging China: More cooperation and transparency are the most important steps you can take to a more effective response,” Azar said at a press conference in Washington.
German authorities expand travel measures against coronavirus
Germany will introduce new reporting requirements for airlines and hospitals to prevent the spread of the new coronavirus from China, Health Minister Jens Spahn says.
Pilots on flights from China will have to inform air traffic control towers about the health status of their passengers before landing at German airports.
Incoming travellers from China will also be asked to fill out forms that detail how they can be reached in the 30 days after their arrival.
The airlines are to keep this information on file during that time so that contact can be made in cases of infection – for instance, in cases where they seek details on who was sitting next to whom.
Coronavirus: How residents cope with life under lockdown in Wuhan
Residents of the Chinese city of Wuhan are finding creative ways to combat the boredom of life under quarantine as the country seeks to contain the spread of the coronavirus outbreak.
Videos on Chinese social media give tips on how to cope indoors, which include breaking out in impromptu lion dances and fishing indoors.
One couple turned their dining table into a makeshift tennis table to play ping-pong.
More here.

Coronavirus: How residents cope with life under lockdown in Wuhan

Virus in China affects sports events, Olympic qualifiers
Amid growing concern over the spread of a new virus outbreak in China, international sports have been postponed and Olympic qualifying tournaments are being taken elsewhere.
The decision by the International Hockey Federation (FIH) to postpone Pro League games in China follows qualifiers for the Tokyo Olympics scheduled in February in soccer, basketball and boxing being moved outside of China.
The Chinese women’s team in field hockey was due to host Belgium for two games on February 8-9 in Changzhou. Those were postponed by the FIH citing “current uncertainties around the outbreak of the coronavirus in China”.
Japanese coach driver catches coronavirus from Wuhan tourists
A Japanese coach driver has been infected with the new coronavirus after coming into contact with Chinese visitors, officials said. This was the first reported case of a possible transmission inside Japan.
The man in his 60s from Nara Prefecture had contact with people from the central Chinese city of Wuhan, Japan’s health ministry said.
The Japanese driver began showing symptoms on January 14 and was hospitalised 11 days later, according to the health ministry statement.
A ministry official, briefing reporters, said the driver had been in close contact with 18 people.
Taiwan confirms first coronavirus patient
Taiwan has reported the first case of coronavirus contracted on its soil and says it will start tracking the location of people who may have been infected with the virus.
Taiwan’s Central Epidemic Command Centre (CECC) says a Taiwanese male in his 50s contracted the illness in Taiwan after his wife returned from a trip to the Chinese city of Wuhan.
“This is Taiwan’s first indigenous case and he was infected by a family member,” Minister of Health and Welfare Chen Shih-chung said in a televised news conference.
Sri Lanka stops issuing visas on arrival to Chinese citizens
Sri Lanka suspended issuing visas on arrival to Chinese tourists as a measure to curb the spread of the coronavirus.
Speaking to reporters at Bandaranaike International Airport in Colombo, Sri Lankan Health Minister Pavithra Wanniarachchi said the suspension would take immediate effect.
“Hereafter, they [Chinese nationals] have to submit their visa application while in China before arriving in Sri Lanka,” Wanniarachchi said.

⚠️ #CoronaVirusOutbreak Update We have begun the process to prepare for evacuation of Indian nationals affected by the situation arising out of nCorona-2019 virus outbreak in Hubei Province, China. (1/2)
— Raveesh Kumar (@MEAIndia) January 28, 2020

German patient caught virus via human-to-human transmission
Germany’s first confirmed coronavirus patient caught the disease from a Chinese colleague who visited Germany last week, officials said.
The Chinese employee, a woman from Shanghai, “started to feel sick on the flight home on January 23”, Andreas Zapf, head of the Bavarian State Office for Health and Food Safety, said at a news conference.
A 33-year-old German, with whom she had attended a meeting in Bavaria, tested positive for the virus on Monday evening.
Read more here.
Up to 1,000 French nationals currently in Wuhan: Minister
French Health Minister Agnes Buzyn said there were currently between 500 and 1,000 French nationals in the Chinese city that is the epicentre of the coronavirus outbreak.
“We know our internal system has identified 500 French nationals (in Wuhan) but we think there might potentially be 500 more on the spot,” she said during a news conference. “They don’t all want to come home.”
Hong Kong suspends train and ferry services to mainland
Hong Kong leader Carrie Lam said the high-speed rail service between the city and mainland China would be on hold from January 30, and all cross-border ferry services would also be suspended in a bid to stop the spread of coronavirus.
Wearing a green face mask, Lam told a press briefing the number of flights to mainland China would also be halved and personal travel permits for mainland Chinese to the city would be suspended.

City of Moscow takes safety measures over virus
Moscow authorities have put in place special safety measures at hotels and tourist sites due to fears over the outbreak of coronavirus, Sergei Sobyanin, the mayor of the Russian capital, said.
“We have taken special control of hotels and other places where tourists gather en masse. When alarming signs appear, emergency medical teams will be sent to carry out a thorough examination,” he wrote on his website.

Here is information on the situation in the countries with confirmed coronavirus cases.
WHO ‘confident’ in China’s ability to contain coronavirus
WHO chief Tedros Adhanom Ghebreyesus said he was confident in China’s ability to control and contain the spread of the coronavirus, according to state news agency Xinhua.
At a meeting with authorities in Beijing, Tedros urged calm and said he did not advocate the evacuation of foreign nationals currently in China, according to Xinhua.

BackPage 1 of 2Next →
In this article:battles, China