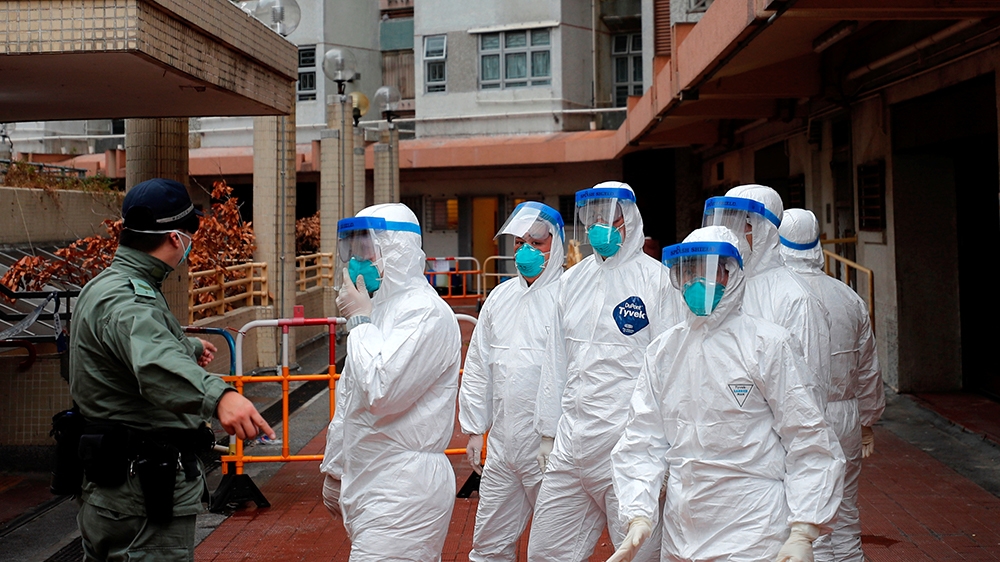 The World Health Organization (WHO) has said a vaccine for the coronavirus could be ready in 18 months, as the UN health body announced that the official name for the virus would be COVID-19.
The announcement came as the death toll in mainland China reached more than 1,000, after 108 people died from the virus on Monday – the highest daily toll since the outbreak began late last year in the central Chinese city of Wuhan.
More:

The total number of deaths on the mainland was 1,016, the National Health Commission said on Tuesday, while 42,638 infections have been reported. The vast majority of deaths and infections are in Wuhan and the surrounding Hubei province.
Two deaths have been recorded outside mainland China – one in Hong Kong and one in the Philippines.
At least 25 countries have confirmed cases and several nations have evacuated their citizens from Hubei.
Here are the latest updates:
Tuesday, February 11
Germany confirms two more cases
Germany has confirmed two more cases of coronavirus in the southern state of Bavaria, raising the overall total to 16.
The two new cases are related to infections among staff at a company in the Starnberg district west of Munich, the Bavarian health ministry said.
Car supplier Webasto said last month that a Chinese employee had tested positive for the virus on returning to China following a visit to the headquarters near Munich. The employee apparently infected several German colleagues during the visit.
Read more about which countries have confirmed cases here.
US health official hopeful some evacuees may be released from quarantine today
An official from the US Centers for Disease Control and Prevention (CDC) said she hoped the first group of US citizens evacuated from Wuhan could be released from quarantine today.
Dr Anne Schuchat, the CDC’s principal director, told a news conference at the National Press Club in Washington that 195 people who arrived in the US on January 29 are being assessed, and she is hopeful they will travel home on Tuesday after 14 days in quarantine.

World must consider coronavirus ‘public enemy number one,’ WHO says
The WHO has asked countries to be “as aggressive as possible” in fighting the newly-named COVID-19 coronavirus.
“If the world doesn’t want to wake up and consider the virus as public enemy number one, I don’t think we will learn from our lessons,” WHO chief Tedros Adhanom Ghebreyesus said in Geneva.
“We are still in containment strategy and should not allow the virus to have a space to have local transmission,” he said.
WHO says vaccine could be ready in 18 months
The first vaccine targeting the coronavirus could be available in 18 months, “so we have to do everything today using available weapons”, WHO chief Tedros Adhanom Ghebreyesus said in Geneva.
He also announced that the new name of the virus would be COVID-19, explaining it was important to avoid stigma and that other names could be inaccurate.
“If we invest now … we have a realistic chance of stopping this outbreak,” Tedros said.
New coronavirus will be named ‘Covid-19′: WHO
World Health Organization chief Tedros Adhanom Ghebreyesus said “COVID-19” would be the new official name for the deadly coronavirus.
“We now have a name for the disease and it’s COVID-19,” Tedros told reporters in Geneva, explaining that “co” stood for “corona”, “vi” for “virus” and “d” for “disease”.
Read the full story here.

US allows government staff to leave Hong Kong
The United States has authorised the voluntary departure of US government employees and their family members from Hong Kong, the State Department said.
According to a department spokesperson the authorisation was made “out of an abundance of caution related to uncertainties associated” with the coronavirus.
Departure is not required and the US consulate in Hong Kong remains open to the public.
Xi: Coronavirus prevention, control work having positive results
Chinese President Xi Jinping said that China’s prevention and control work on the new coronavirus is having positive results, and the country will win the battle against the virus, state media reported.
China will be more prosperous after the battle against the virus is won, the report cited Xi as saying.

Xi’s comments came a day after he made his first public appearance since the outbreak began [File: Aly Song/Reuters]

Situation in China’s Huanggang remains severe: Communist Party
The Communist Party boss of China’s Hunggang city, which has been hit hard by the coronavirus outbreak said the situation in the city was still severe.
It continues to face shortages of medical supplies such as face masks and protective goggles, Liu Xuerong told a news conference carried live on state television.
UK team tests coronavirus vaccine on mice
A team of UK scientists believe they are among the first to start animal testing of a vaccine for the new coronavirus.
Researchers at Imperial College London said their ultimate goal was to have an effective and safe way of halting the strain’s spread by the end of the year.
“At the moment we have just put the vaccine that we’ve generated from these bacteria into mice,” researcher Paul McKay told AFP.
“We’re hoping that over the next few weeks we’ll be able to determine the response that we can see in those mice, in their blood, their antibody response to the coronavirus.”
Indonesia says it has nothing to hide with no cases detected
Indonesia’s health minister said the country is not hiding anything, after some medical researchers expressed concern that coronavirus cases may have gone undetected in the world’s fourth most populous country.
While the virus has quickly spread from China throughout much of the rest of the Asia-Pacific region and beyond, the sprawling Southeast Asian archipelago of more than 260 million people has not recorded any cases.
“We have kits to check coronavirus and they’re certified … nothing is concealed,” Health Minister Terawan Agus Putranto said after a cabinet meeting in Jakarta.

Second plane carrying evacuees from China arrives in Canada
A second plane carrying 185 Canadian evacuees from Wuhan has landed at an air-force base in Trenton, Ontario, CBC news reported.
GM’s South Korean unit to suspend output for two days
General Motors’ South Korean unit said that it plans to suspend production at one of its factories on February 17 and 18, becoming the latest automaker affected by a Chinese parts shortage stemming from the coronavirus outbreak in China.
The affected line, located in the city of Bupyeong near Seoul, produces the Chevrolet Trailblazer crossover for export to the United States and other markets and domestic sales, she said.
Novacyt biotech company says winning race for high-speed virus test
Franco-British biotech company Novacyt says it can offer a coronavirus test that is faster than rival methods by focusing on a narrow sequence of DNA coding, as it fights stiff competition to turn the outbreak into a business opportunity.
Novacyt shares have risen by almost 400 percent so far this year after it said it had designed a test able to detect the coronavirus in less than two hours. Current testing, which can also identify other strains, can take up to a day.
The test has not received regulatory approval but Novacyt hopes to receive a green light from the European Union next week and has applied to the United States’ Food and Drug Administration for emergency use.

BackPage 1 of 2Next →
In this article:China, coronavirus