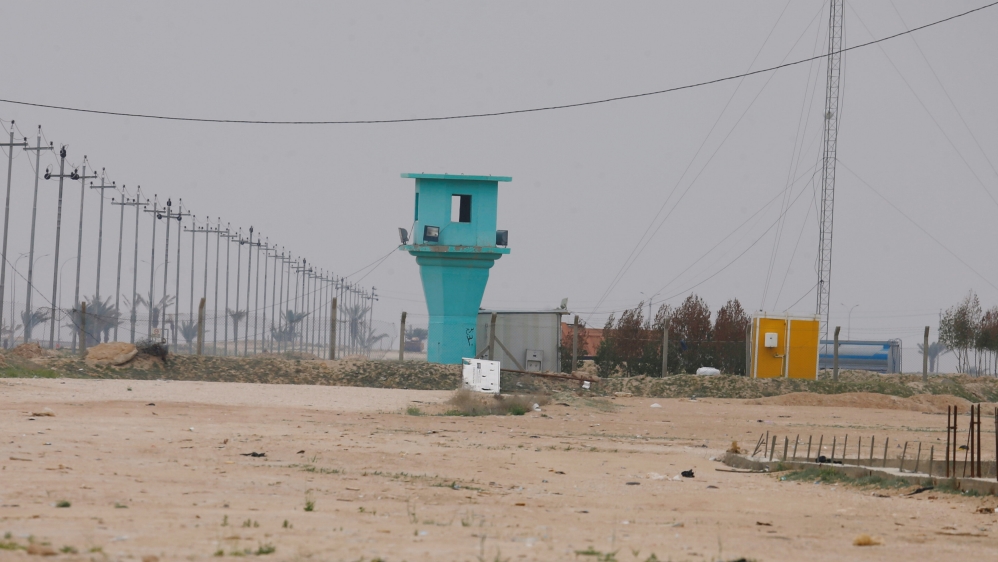 Iraq has condemned overnight US air strikes on Friday, with its military saying they killed six people and describing them as violation of sovereignty and a targeted aggression against the nation’s regular armed forces.
President Barham Salih said such “repeated violations” could cause Iraq to unravel into a failed state and revive the Islamic State of Iraq and Levant (ISIL, also known as ISIS) group.
More:

US Congress votes to limit Trump’s war powers against Iran

Iraq’s security problems will be solved by supporting its government, not turning it into a battlefield for a proxy war, Salih said, warning that ISIL might seize on any chaos.
“The repeated violations the state is being subjected to are a dangerous and deliberate weakening of its abilities especially at a time when Iraq faces unprecedented challenges on political, economic, financial, security, and health fronts,” he said.
Meanwhile, Iraq’s foreign minister summoned the ambassadors of the United States and United Kingdom over the deadly overnight air raids against Iraqi military positions.
“The foreign minister held an emergency meeting in which the ministry’s undersecretaries, advisors and official spokesman discussed the measures regarding the recent American aggression. He has ordered the summoning of the United States and British ambassadors to Baghdad,” a spokesman said in a statement.
It came after Iraq’s military said at least one civilian and five security personnel were killed in the US raids, which it denounced as a violation of sovereignty and a targeted aggression against Iraq’s armed forces.
The civilian killed in the overnight attack was a cook working at an airport under construction in Karbala, the military said in a statement. The death toll included three soldiers and two policemen, while four soldiers, two policemen, one civilian and five militiamen were wounded, it said.
Earlier, the Pentagon said the US conducted “defensive precision strikes” against the Iran-backed Kataib Hezbollah facilities across Iraq, in an attack that was in response to an earlier rocket barrage that killed two US troops and one British soldier.
A US official told The Associated Press news agency that the raids were a joint operation with the British.
Reporting from Baghdad, Al Jazeera’s Simona Foltyn said there had been “widespread condemnation” of the attacks that targeted different southern positions belonging to the Popular Mobilisation Forces, an umbrella organisation of several armed militias, with the latest incident likely to once again ignite calls in Iraq for the expulsion of US troops.
Citing the military’s statement, Foltyn said the “fatalities suggest that these air strikes were not as precise as the US said that they were, and this is rather embarrassing for the US because the Iraqi army and police are its partners under the coalition to fight ISIL.
“Essentially, rather than deterring Kataib Hezbollah and other Iranian-linked groups from conducting further attacks on US servicemen, the US in fact ended up further rupturing the relationship between its Iraqi partners and its presence here in Iraq.”

US President Donald Trump gave the Pentagon the authority to respond to Wednesday’s attack, responsibility for which has not been claimed, again raising tensions with neighbouring Iran after the two countries came to the brink of war earlier this year.
Washington had blamed Kataib Hezbollah for an attack in December that killed a US contractor, leading to a cycle of tit-for-tat confrontations that culminated in the January 3 US assassination of top Iranian general Qassem Soleimani on January 3. Five days later, a retaliatory Iranian missile attack on two bases in Iraq housing US troops left more than 100 US troops with brain injuries but caused no fatalities.
Iran on Friday warned US President Donald Trump against taking “dangerous actions” after the overnight air raids.
“The United States cannot blame others … for the consequences of its illegal presence in Iraq and the nation’s reaction to the assassination and killing of Iraqi commanders and fighters,” foreign ministry spokesman Abbas Mousavi said.
“Instead of dangerous actions and baseless accusations, Mr Trump should reconsider the presence and behaviour of his troops in the area,” he added.
The Pentagon said late on Thursday that its “strikes” had targeted Kataib Hezbollah that housed weapons used to target US and coalition troops,” it said.

Coronavirus pandemic: All the latest updates