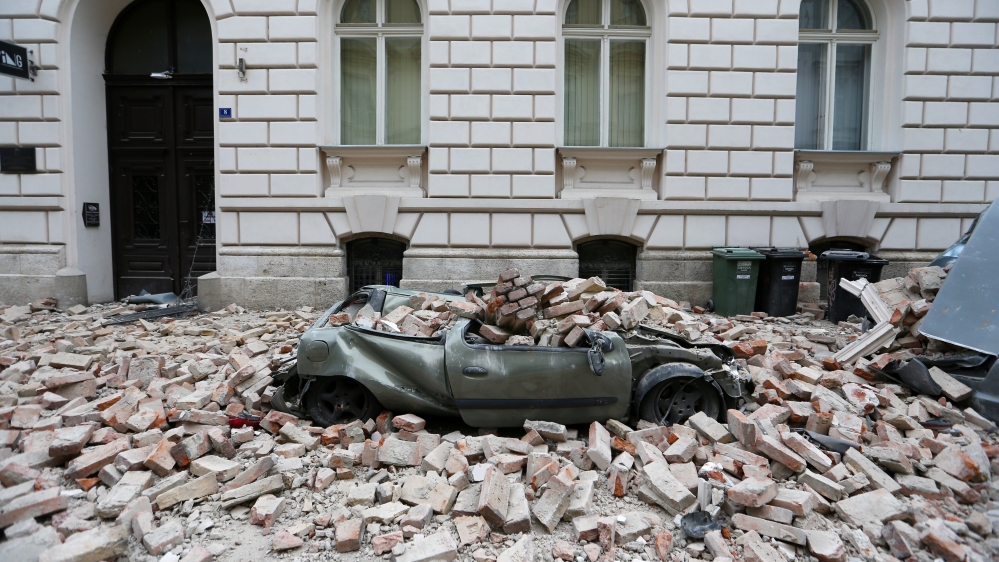 A strong earthquake in Croatia on Sunday caused panic, the evacuation of hospitals and widespread damage including to the capital’s iconic cathedral – all amid a partial coronavirus lockdown.

A 15-year-old was reported to be in critical condition and 16 others were injured, authorities said.
More:

Major earthquake strikes in Caribbean between Jamaica and Cuba

GFZ German Research Centre for Geosciences said the earthquake, which was felt across the Western Balkans, struck at a depth of 10km (six miles). It downgraded the magnitude to 5.3 from an initial reading of 6.0.

“It lasted over 10 seconds. By far the strongest I have ever felt,” one witness said, adding that it was followed by several aftershocks.
The US Geological Survey said the earthquake measured 5.4, while the European Mediterranean Seismological Centre (EMSC) also reported a magnitude 5.3, followed by another magnitude 5.1 earthquake.
Prime Minister Andrej Plenkovic said the earthquake was the biggest in Zagreb in the last 140 years.
It caused widespread damage including to the city’s iconic cathedral, with the top of one of its two spires collapsing – all amid a partial coronavirus lockdown.
Downtown streets were littered with debris. Concrete slabs fell on cars and chimneys landed in front of entrances.

Footage from the scene showed mothers dressed in nightgowns hugging their newborn babies in a car park as they evacuated a damaged maternity hospital amid freezing temperatures.
The women, newborn babies and incubators were being moved to a new location with the help of the army.
In Zagreb, people fled apartments and took to the streets while parts of the capital experienced electricity cuts. A church bell tower was damaged and some buildings collapsed, Reuters news agency reported.
Several fires were also reported. Residents shared photos of belongings falling off shelves, broken bottles and glass inside homes.
Officials first said a 15-year-old was killed, but doctors later said she was in critical condition and they were fighting to save her life. They gave no immediate details on the extent of other injuries.

A man looks at damages at the Basilica of the Heart of Jesus, following an earthquake in Zagreb [Antonio Bronic/Reuters]

‘Complex situation’
Croatia’s Interior Minister Davor Bozinovic issued an appeal on Twitter for people in the streets to keep a social distance from each other as the country struggles to contain the spread of the coronavirus. So far, Croatia has confirmed 206 cases of the virus and one death.
Up to five people are allowed to be together while keeping distance.
The prime minister urged the citizens to remain calm and stay outside their homes in the central parts of Zagreb, which sustained the most damage.

“We have two parallel crisis that contradict each other,” Plenkovic, the prime minister, said after an emergency meeting of Croatia’s top officials.
Al Jazeera Balkans’s Mirna Brekalo reporting from Zagreb said some residents have gathered in a local park, to protect themselves from potential aftershocks.
“In these situations of increased fear, it’s understandable that some people aren’t currently thinking about the coronavirus, which creates an additional problem for the whole situation,” Brekalo said.
Croatian soldiers wearing masks and carrying shovels could be seen helping efforts to clear the damage on the streets of Zagreb.
Top officials toured the damaged areas as some citizens criticised city authorities over the poor states of buildings in the old part of the city, some of which date back to the 19th century.
“We will try to clear the streets as soon as possible,” Plenkovic said. “Stay outside your homes and keep distance.”
Interior Minister Bozinovic said the situation was complicated by the restrictive virus-related measures in place.
“There are rules for when there is an earthquake, but when there is an earthquake at the same time when there is a global pandemic, then it’s a much more complex situation,” Bozinovic told the state HINA news agency.
Continue Reading…

In the US, one in four ordered to stay home over coronavirus