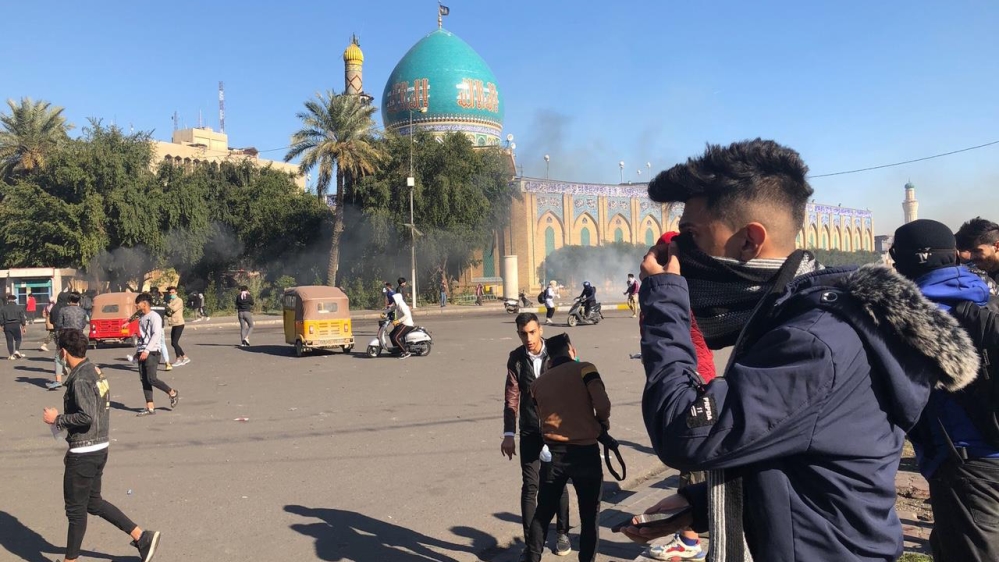 Baghdad, Iraq – Anti-government protesters in Iraq have struck a defiant tone at their main sit-in encampment in the capital, Baghdad, as continuing clashes with security forces continue for a third day.
The central Tahrir Square was a bustle of activity on Monday. Protesters took advantage of the warm sun to air out blankets and mattresses soaked from days of rain.
More:

Street vendors selling battery packs, mobile chargers and assorted knickknacks crowded the square, where various nationalistic songs blared from the speakers.
A few hundred metres away at Khilani Square, one of the front line battle spots of the protest movement, security forces fired tear gas and live bullets on protesters in an attempt to force them back to Tahrir.
On Saturday, riot police briefly managed to push those protesters back by shooting at them and setting tents on fire.
In the southern cities of Nasiriya, Basra and Diwaniyeh, clashes erupted as security forces attempted to overrun the main protest squares and barricades set up by the demonstrators.

A pro-revolution mural on a wall inside a Turkish restaurant says: ‘By the people’s command, now is the time’ [Linah Alsaafin/Al Jazeera]

At least two protesters were killed overnight on Monday in Nasiriya after unknown gunmen in pick-up trucks shot at them.
The crackdowns on Saturday came shortly after influential Shia leader Muqtada al-Sadr, who also heads the largest bloc in Parliament, announced he is withdrawing his support to the protests.
Sadr’s decision came a day after tens of thousands of his supporters crowded Baghdad’s Jadriya neighbourhood on Friday, calling for the removal of US and Iranian forces from the Iraqi soil.
Sadr took a ‘wrong decision’
Sadr, whose Sairoon bloc opposes foreign interference, had initially joined the anti-government protests a few weeks after they took off last October, as Iraqis from different backgrounds and ages banded together to call for a complete overhaul of what they considered a corrupt ruling elite.

Advertisement. Scroll to continue reading.
BackPage 1 of 2Next →
In this article:'Doesn't, affect