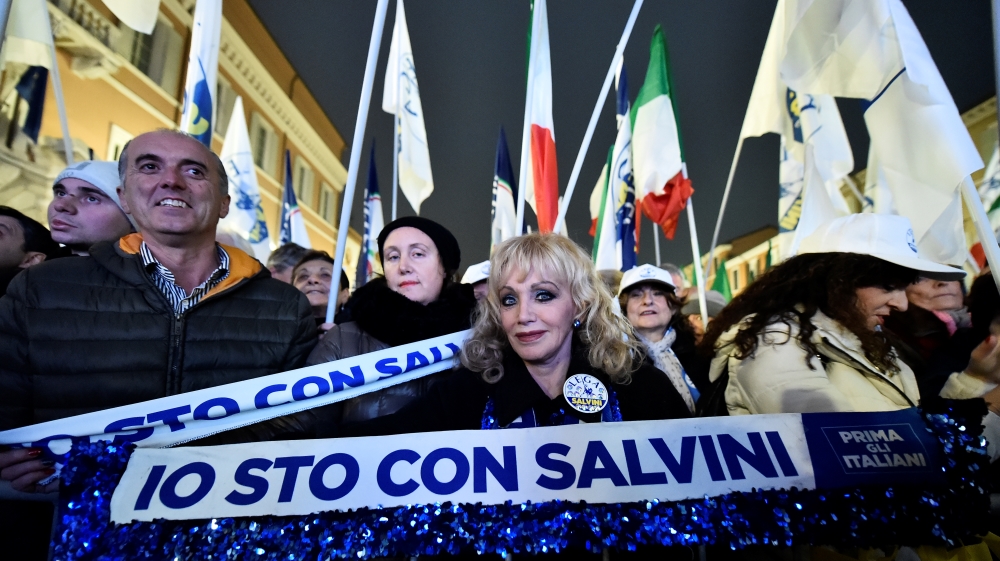 Polls have opened in Italy in a key regional election which the far right hopes will destabilise the country’s fragile coalition government and help opposition leader Matteo Salvini return to power.
The wealthy centre-north region of Emilia-Romagna has been a stronghold of the Italian left for more than 70 years, but while left-wing values still hold sway in its cities, the right has been rallying serious support in towns and the countryside.
More:

With Salvini gone, what’s next for Italy’s migration policy?

The last opinion polls published before the pre-election media blackout showed Salvini’s anti-immigrant, anti-European League neck-and-neck with the centre-left Democratic Party (PD), which governs Italy in coalition with the anti-establishment Five Star Movement (M5S).
Some 3.5 million citizens are eligible to cast ballots to elect the region’s president between 7am (06:00 GMT) and 11pm (22:00 GMT), alongside similar regional elections in the smaller southern region of Calabria.
The League hopes for a repeat of its historic October win in Umbria, which had been a left-wing stronghold for 50 years.
Its candidate in Emilia-Romagna, Lucia Borgonzoni, 43, has been overshadowed by Salvini, who has held daily rallies and inundated social media with photographs of himself sampling delicacies in the Parma ham and Parmesan cheese heartland.
The League has been dominating Italian politics since it entered a coalition with the M5S after the 2018 general elections. In a surprise move last August, Salvini decided to pull the plug on that government, hoping to induce – and win – new elections.
Salvini, a former interior minister and deputy prime minister, angered his opponents on Saturday by breaking the pre-election silence – Italian law dictates that candidates cannot campaign the day before a vote – by tweeting about the “eviction notice” he was set to deliver to the government.
The PD’s candidate Stefano Bonaccini is the incumbent president and is hoping to win for his track record in the region, which boasts low jobless figures and is home to “Made in Italy” success stories such as Ferrari and Lamborghini.

He may also benefit from the youth-driven, anti-fascist Sardines movement, which was born in the region just a few months ago but has fast become a national symbol of protest against the far-right.
Not only is Emilia-Romagna the largest and most populous of Italy’s “red regions”, it is also one of Italy’s richest
Unemployment levels are well below the national average – despite considerable inequality between urban and industrial areas and left-behind villages in the mountain areas.
“Positive economic and social indicators in the areas of welfare, public health and employment levels, in fact, hide a number of issues,” Carlo De Maria, director of the Institute of the Resistance and Contemporary History, told Al Jazeera.
“Take unemployment levels, for example. They may be low, but the quality of work has, in fact, been getting worse. There is more precariousness and uncertainty,” added De Maria, who is a senior researcher in contemporary history at the University of Bologna.
“Some people can be sceptical of all the talk about good governance and perceive it as untrue, particularly those living in the suburbs or the Apennine.”
Stabilising factor
The League triumphed in Emilia-Romagna at the European Parliament elections in May, becoming the leading party with nearly 34 percent of the votes, topping the PD’s 31 percent.
Just five years earlier it had taken home a mere 5 percent, compared with the PD’s 53 percent.
Prime Minister Giuseppe Conte has dismissed fears of a government crisis should Salvini’s party win, saying the election concerns the region alone and has no bearing on national politics.
The coalition’s main stabilising factor is a joint fear of snap elections which would likely hand power to Salvini, whose party is leading national polls.
Analysts expect a League victory to increase tensions within the coalition government considerably, with the PD likely to blame the M5S for refusing to join forces behind a single candidate – thus splitting the anti-Salvini vote.
And observers have also warned it could cause the M5S, which is riven by infighting and has been haemorrhaging members, to collapse.
Contested M5S head Luigi Di Maio resigned on Wednesday in a bid to stave off a crisis – but observers warned that it may not be enough.
“If the PD were to lose another regional bastion after Umbria three months ago, it may conclude that it would have more to lose from staying in alliance with the ever-weaker M5S than from risking new elections,” Berenberg Economics said on Friday.
The PD is braced for a poor election showing in both Emilia-Romagna and Calabria.
Continue Reading…

Delhi’s governing Aam Aadmi Party (Common Man’s Party or AAP) is on course for a stunning win in the assembly elections, according to the latest poll results. With counting of votes nearing completion, the AAP won 28 seats and was leading in another 35 of the 70 constituencies, while Prime Minister Narendra Modi’s Bharatiya Janata Party (BJP) won… 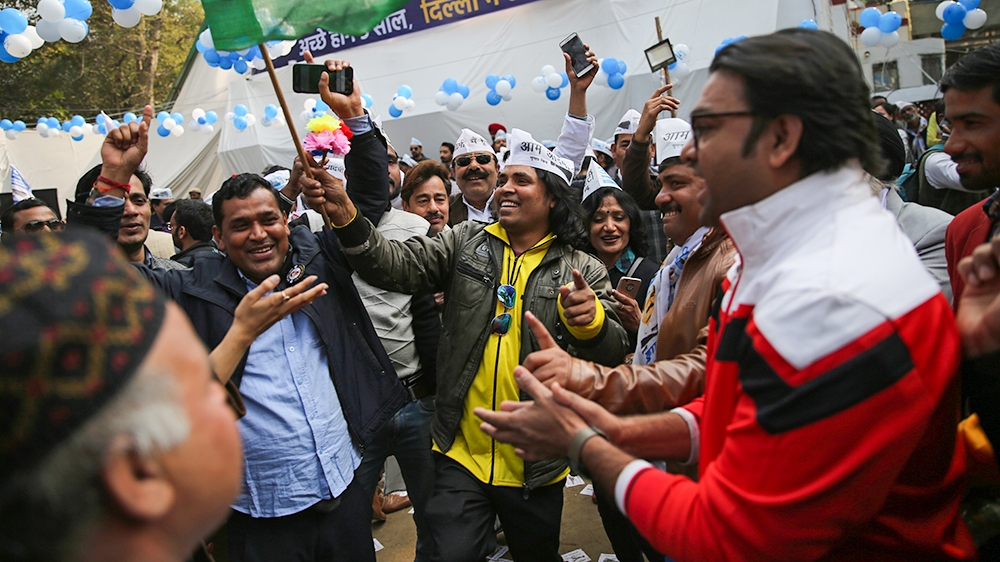 Delhi’s governing Aam Aadmi Party (Common Man’s Party or AAP) is on course for a stunning win in the assembly elections, according to the latest poll results.
With counting of votes nearing completion, the AAP won 28 seats and was leading in another 35 of the 70 constituencies, while Prime Minister Narendra Modi’s Bharatiya Janata Party (BJP) won 2 seats and was leading in another five, the Election Commission said on Tuesday.
The Congress party, led by Italian-born Sonia Gandhi, repeated its 2015 performance and once again drew a blank. Full results were expected later on Tuesday.
More:

“Dilliwalon [residents of Delhi], I love you,” said AAP leader Arvind Kejriwal addressing party workers in New Delhi. He called the verdict a “win for Bharat Mata (Mother India)”.
The results show the BJP’s divisive campaigning did not seem to pay off, as voters opted for incumbent Chief Minister Arvind Kejriwal’s pro-poor policies.
“The Delhi result is extremely important because it signals a defeat of the politics of polarisation and division that BJP unleashed here,” political analyst Zoya Hasan told Al Jazeera.
“This election was perhaps the most hate-filled election in India’s electoral history. The Delhi voter has given a very good message to the country that hate politics doesn’t work …” said Hasan, who is also Professor Emeritus at Jawaharlal Nehru University (JNU).
“I hope the BJP will learn a lesson and shouldn’t repeat this kind of blatant hate politics in other states that are going to elections in the next two years.”
Exit polls released on Saturday projected the AAP, led by Kejriwal, winning more than 50 seats. In the last elections held in 2015, the incumbent party won 67 out of 70 seats.
Nearly 61 percent of the capital’s 14.7 million voters cast their ballots on Saturday in elections believed to be a litmus test for Modi in the wake of deadly anti-government protests that erupted nearly two months ago.
Neha Tyagi, vice president of AAP’s women wing, said: “We were expecting a win, but the way it is trending we are happy.”
“People have voted for the development work that AAP has been able to deliver in the last tenure,” she told Al Jazeera.

Pro-poor policies
The AAP’s pro-poor policies have focused on fixing state-run schools and providing free healthcare and bus fares for women during its first term.
The BJP was accused of running a campaign based on religious polarisation, with many of its leaders targeting the Muslim community, who form a little more than 10 percent of the capital’s population.
The New Delhi election is being seen as a test of Modi’s popularity following months of deadly nationwide anti-government protests against a new Citizenship Amendment Act (CAA) that saw thousands of people take to the streets daily in the capital and across India.
The law makes it easier for non-Muslim immigrants from three neighbouring countries who came to India before 2015 to become Indian citizens, a provision that forces critics to call the legislation anti-Muslim.
The CAA and a proposed nationwide National Register of Citizens have stoked suspicion that Modi wants to turn secular India into a Hindu nation, something his party denies.
“People of Delhi have rejected BJP’s politics of hate and divide,” Gurucharan Singh, an AAP supporter, told Al Jazeera.
“BJP tried its best to make CAA a big election issue, but people gave its mandate to AAP on the development work it has done in the last five years and rejected BJP.”
The Hindu-nationalist BJP led by Modi won a bigger majority in a general election in May, but it has lost a string of state elections since then. The party ran a campaign accusing protesters of supporting India’s archrival Pakistan.
The Congress – the main opposition at the national level – was projected to win no seats in Delhi on Tuesday, data showed, reflecting the deep decline in its fortunes.
Bilal Kuchay contributed to this report from New Delhi
Continue Reading…