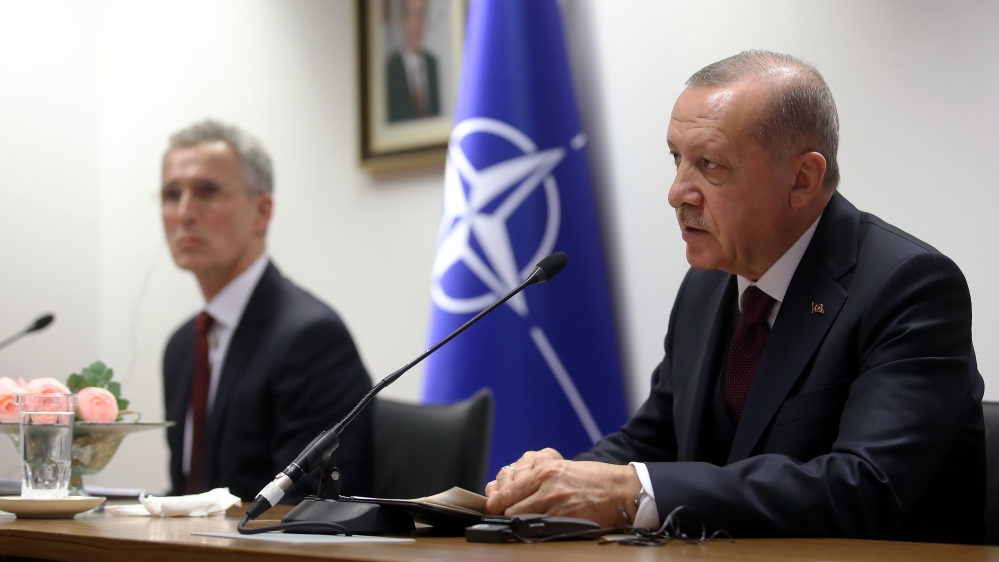 Turkey’s President Recep Tayyip Erdogan has demanded more support from his NATO and EU allies over the war in Syria as fighting rages in Idlib, and a refugee crisis unfolds at the Turkish-Greek border.
Erdogan flew to Brussels for talks with the European Union and NATO leaders after tension rose over the fate of tens of thousands of refugees trying to enter EU-member Greece since Ankara said last month it would no longer try to keep them on its soil.
More:

In Pictures: Refugees stream towards Greece as Turkey opens gates

After talks on Monday with NATO Secretary-General Jens Stoltenberg, Erdogan said he wants Turkey’s Western partners to do more to support his country to cope with millions of refugees from Syria.
“The crisis stemming from Syria, with its security and humanitarian aspects, is threatening our region and even all of Europe,” Erdogan said. “No European country has the luxury to remain indifferent.”
Thousands of people have massed at Turkey’s land border with EU-member Greece since Erdogan’s government made good on a long-standing threat and announced it would no longer prevent migrants from crossing.
‘Critical period’
The president made the move after dozens of Turkish troops were killed in intensifying fighting in Syria’s northwestern region of Idlib amid a government offensive – backed by Russian airpower – to recapture the last rebel stronghold in the nine-year war.
“We expect concrete support from all our allies in the fight that Turkey has been carrying out alone … NATO is in a critical period during which it needs to clearly show support,” Erdogan told reporters standing alongside Stoltenberg.

EU countries have rallied behind Greece, which is also a member of NATO, and described it as a “shield” protecting Europe’s borders with the outside world.
They have urged the Turkish leader to halt refugee and migrant departures and negotiate a new deal under which EU members would do more to alleviate the humanitarian situation on the Syrian border.
“The events at the Greek-Turkish border clearly point to politically motivated pressure on the EU’s external border,” the head of the European Commission, Ursula von der Leyen, said before talks with Erdogan.
“Finding a solution to this situation will require relieving the pressure that is put on the border.”
‘More than money’
Turkey hosts more than 3.5 million Syrian refugees, and Erdogan has demanded that Europe shoulder more of the burden of caring for them.
Erdogan was due to hold talks with EU leaders Charles Michel and von der Leyen who are expected to insist that Turkey adhere to the joint refugee agreement of 2016.

The EU-Turkey agreement of 2016 stipulates that Ankara will prevent undocumented migration towards the EU. In return, the 27-nation bloc promised six billion euros ($6.8bn dollars) to care for Syrian refugees in Turkey.
Al Jazeera’s Natasha Ghoneim, reporting from the Turkish city of Erdine on the border with Greece, said: “Erdogan had been asking NATO to give Turkey support on the battlefield and that is something he is likely to bring up during his meetings with NATO and EU leaders.
“Analyst say they do not expect him to simply resume abiding by that 2016 agreement with the European Union for billions of dollars in exchange for strict control at the borders. They say Erdogan wants to see the EU doing more than just providing financial assistance.”
Erdogan had already given NATO a list of 10 requests including greater air support on the Turkish-Syrian border, more reconnaissance aircraft, surveillance drones, and more ships in the eastern Mediterranean, according to diplomatic sources.
‘Common solutions’
On Monday, Stoltenberg said the alliance was already supporting Turkey and would continue to do so.
Stoltenberg also highlighted Turkey’s front-line role as a NATO member, saying: “No other ally has suffered more from terrorist attacks, and no other ally holds more refugees.”
He said NATO support would continue but expressed “great concern” about events on the Turkish-Greek border. “The issue of migration and refugee flows is a common challenge that requires common solutions,” he said.
European leaders are considering taking in 1,500 child refugees to ease pressure on overwhelmed camps on Greek islands facing a new wave of arrivals from Turkey.
Von der Leyen said there was no immediate concrete offer of new funding to revive a deal with Turkey to keep refugees from Syria and beyond.
“We will restart the dialogue,” she said, adding there would be “considerable discussions in the next few days and weeks”.
In 2016, Turkey and the EU agreed to a deal whereby Brussels would provide billions of euros in aid in exchange for Turkey curbing the flow of migrants.
But Ankara has repeatedly accused the bloc of not fulfilling promises made as Europe suffered its worst refugee crisis since World War II, when one million people fled to the continent in 2015.
Continue Reading…

US demands restoration of UN sanctions against Iran |NationalTribune.com

The administration of US President Donald Trump has formally notified the United Nations that it wants all UN sanctions on Iran restored, claiming significant Iranian violations of the 2015 nuclear deal, in a move that drew swift rejections from countries that remain part of the agreement. Secretary of State Mike Pompeo delivered the notification to… 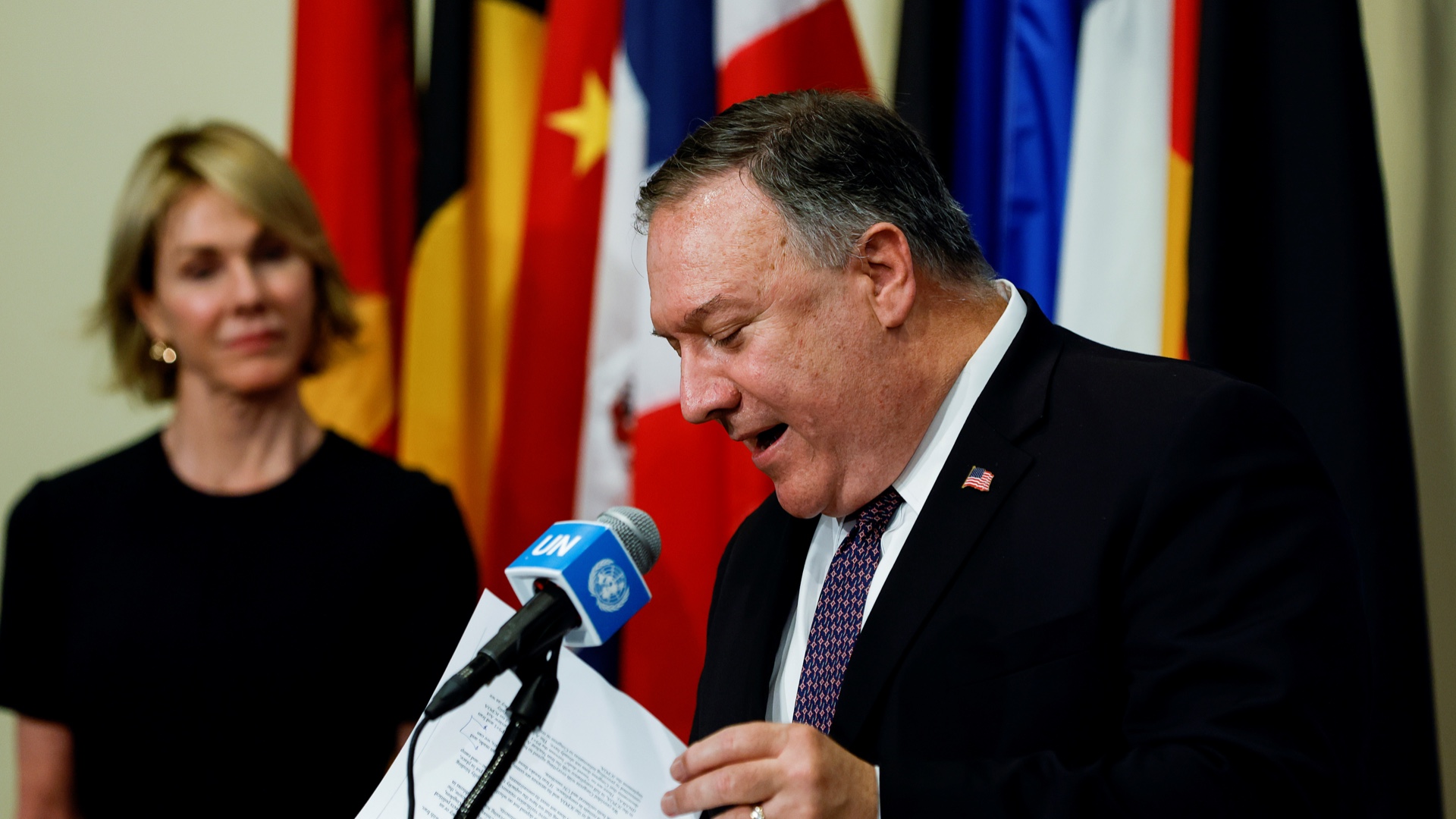 The administration of US President Donald Trump has formally notified the United Nations that it wants all UN sanctions on Iran restored, claiming significant Iranian violations of the 2015 nuclear deal, in a move that drew swift rejections from countries that remain part of the agreement.
Secretary of State Mike Pompeo delivered the notification to the president of the UN Security Council on Thursday, and later told reporters the US had the right to reimpose sanctions under UN resolution 2231 that laid out the rules of the deal between Iran and six world powers. The US withdrew from the accord in 2018.
“We think this is really straightforward we think this is very simple,” Pompeo said. “These UN Security Council resolutions will come back into place 31 days from now, and the United States will vigorously enforce them.”
He said he expected the other UN Security Council members to “comply with their obligations”.
Iran’s Ambassador to the UN Majid Takht Ravanchi said on Thursday the US letter was “inadmissible”.
“The US has no legal authority. The US has no legal argument whatsoever,” he said.
Ravanchi said the US had failed to utilise the dispute process under resolution 2231, adding that before notifying the Security Council it must have made “good faith efforts to resolve the issue”. The US move was “doomed to failure,” he said.
“We are confident that nothing is going to happen in the next 30 days. So, the US attempt is is in futility,” Ravanchi said.
UNSC members reject US step
A Russian deputy ambassador to the UN, Dmitry Polyansky, condemned the US move on Twitter.
“Looks like there are 2 planets. A fictional dog-eat-dog one where US pretends it can do whatever it wants without ‘cajoling’ anyone, breach and leave deals but still benefit from them, and another one where the rest of the world lives and where intl law and diplomacy reign”, he wrote.Separately, three European nations also rejected the move and stressed their continuing support for the nuclear accord, also known as the Joint Comprehensive Plan of Action (JCPOA).
“France, Germany and the United Kingdom note that the US ceased to be a participant to the JCPOA following their withdrawal from the deal on May 8, 2018,” the group said in a statement. “We cannot therefore support this action which is incompatible with our current efforts to support the JCPOA.”
Pompeo lashed out at the Europeans, accusing them of privately agreeing with the US concerns but lacking the courage to say so publicly. “Instead they chose to side with ayatollahs,” he said. “Their actions endanger the people of Iraq, of Yemen, of Lebanon, of Syria and indeed their own citizens as well.”
‘Non-performance’ by Iran
In a letter to Indonesia’s ambassador to the UN, Dian Triansyah Djani, whose country currently holds the rotating presidency of the council, US Ambassador to the UN Kelly Craft said the US was notifying the body of “significant non-performance” by Iran related to the nuclear deal. As a result, Craft said the process leading to the reimposition of UN sanctions had been initiated.

The UN’s nuclear watchdog, the International Atomic Energy Agency, has reported some Iranian violations of the agreement, but Tehran says those are the result of the US violating the accord by withdrawing from it and then reimposing harsh unilateral sanctions.
Craft noted that the European participants in the deal had attempted to bring Iran back into compliance. But she said “despite extensive efforts and exhaustive diplomacy on the part of those member states, Iran’s significant non-performance persists”.
“As a result, the United States is left with no choice but to notify the council that Iran is in significant non-performance of its JCPOA commitments,” she wrote.
US withdrawal
Craft’s letter was accompanied by a six-page explanation of why the US believes it retains the right to invoke the so-called “snapback”, a mechanism afforded to those who are part of the accord.

US Secretary of State Michael Pompeo and President Trump have made no secret of their intention to trigger snapback, but other council members say the US does not have the right to do so [Mandel Ngan/ AFP]

The US maintains that its withdrawal from the nuclear deal does not remove its right as an original participant and a permanent Security Council member to demand the restoration of sanctions.

That argument, however, has already been rejected by the other members of the council, including US allies the United Kingdom and France, along with China and Russia.
“We do not take it that they have the legal right or the reason to initiate this thing,” Russian ambassador, Vassily Nebenzia, said on Thursday before Pompeo’s notification. “So, of course, we will challenge it.”
China has said it agrees with the Russian position, and Iranian Foreign Minister Mohammad Javad Zarif told UN chief Antonio Guterres in a phone call on Thursday that the Security Council must resist the US demand.
“This would have dangerous consequences for international law, it will bring nothing but the destruction of international mechanisms and it will discredit the Security Council,” Zarif said.
Under the terms of the resolution, Thursday’s notification starts a 30-day countdown after which pre-2015 UN sanctions on Iran that were eased will be reimposed unless a resolution specifically extending their suspension is passed. The US, however, would use its veto power to block any resolution extending the sanctions relief.
Could be ignored
Because of the legal debate over US standing, it is possible that the snapback demand will simply be ignored by the other members, which could call into question the Security Council’s relevance and ability to enforce its own legally binding decisions.
Trump and Pompeo have made no secret of their intention to pursue snapback, particularly after the administration’s embarrassing defeat last week at the Security Council on extending the arms embargo on Iran that expires in October. The US won just one other “yes” vote, with China and Russia opposed and the 11 other members abstaining.
As with the arms embargo, Russia and China bitterly oppose reimposing other UN sanctions on Iran. The UK and France, US allies, also want to preserve the nuclear deal in the event Trump loses his bid for a second term in November’s presidential election. Democratic candidate Joe Biden has said he would try to revive the agreement.
The Europeans fear that the reimposition of sanctions may lead Iran to quit the deal entirely and plough ahead with efforts to develop atomic weapons. The Trump administration says it withdrew precisely because it eased sanctions, which opened major revenue streams for Iran while gradually easing restrictions on its nuclear activities that money could pay for.
Continue Reading…