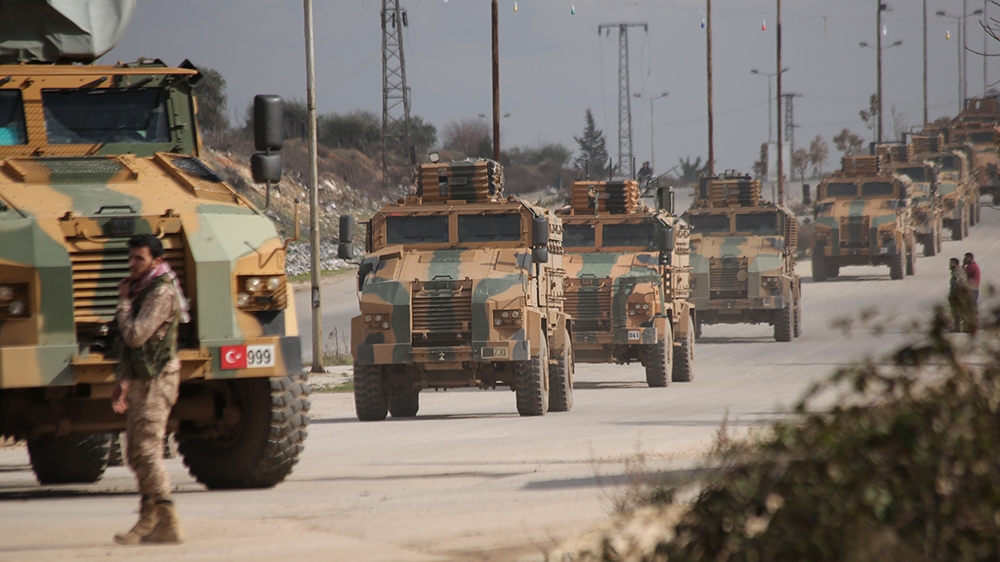 Reyhanli, Turkey – The presidents of Turkey and Russia have “voiced concern” about the escalation of tensions in northwest Syria, a day after dozens of Turkish soldiers were killed in air raids by Moscow-backed Syrian government forces.
Friday’s phone call between Recep Tayyip Erdogan and Vladimir Putin came as refugees fleeing the fighting in Syria’s Idlib province continued to flock to the border with Turkey, carrying stories of horror and hardship. “Death is all around,” one Syrian man who managed to cross over told Al Jazeera.
Nearly a million people have been forced from their homes in Idlib since the Syrian government launched its offensive to capture the province from Turkey-backed opposition forces in December – a crisis the United Nations has called a “man-made humanitarian nightmare”.
The rapid advance of the Syrian government forces, backed by Russian airpower, and the deaths of the 33 Turkish troops on Thursday have raised fears of a direct military confrontation between Ankara and Moscow. The toll from Thursday’s attack was the biggest military loss Ankara has suffered in one day since it intervened in Syria in 2016.
As tensions escalated, Erdogan and Putin spoke on the phone at Turkey’s initiative, according to the Kremlin.
“Both sides reaffirmed that it was necessary to adopt additional measures in order to normalise the situation in northwestern Syria,” the Kremlin said. “They agreed to step up the corresponding interagency consultations and to examine the possibility of soon holding a meeting at the highest level.”
A summit could take place between the two leaders as early as next week, a spokesman for Putin said afterwards. Meanwhile, a spokesman for Turkey’s foreign ministry said Ankara demanded a “sustainable truce, de-escalation and withdrawal of Syrian government forces” at talks with a Russian delegation in Ankara.
Turkey ‘strikes 200 targets’
Turkey and Russia, although supporting opposing sides in the Syrian conflict, maintain diplomatic relations that have been repeatedly tested since the Syrian government’s offensive on Idlib, the last major opposition stronghold in the country.
Earlier this month, forces loyal to Syrian President Bashar al-Assad captured the arterial M5 highway, which links all of the country’s major cities and six provinces, and consolidated control over Aleppo province. This has come at a heavy cost to the Turkish military, which has 12 observation posts in the region under a 2017 and 2018 “de-escalation zone” agreement with Russia.
Some of these positions now lie in areas seized by the Syrian government.
Speaking in Ankara on Friday, Turkey’s Defence Minister Hulusi Akar said his country’s military had responded to the Syrian government attack by striking 200 of their targets from the air and ground. Some 309 Syrian troops were “neutralised”, he said. Among the targets were Syrian government helicopters, military tanks, armoured vehicles, howitzers and ammunition depots.
“This attack [on Turkish soldiers] occurred even though the locations of our troops had been coordinated with Russian officials in the field,” he said. The Russian foreign ministry, denied the claim, saying: “Turkish soldiers who were in the battle formations of terrorists came under the fire of Syrian troops.”

Meanwhile, following an emergency NATO meeting in Brussels, Secretary-General Jens Stoltenberg called on Syria and Russia to “stop the indiscriminate air attacks” and to “fully engage in UN-led efforts for a peaceful political solution”.
“We also call on Russia and the Syrian regime to fully respect international law,” Stoltenberg said, before adding that the meeting was “an expression of support” for NATO ally Turkey.
The European Union also weighed in, warning any escalation could lead to a “major open international military confrontation”.
“It is also causing unbearable humanitarian suffering and putting civilians in danger,” Josep Borrell, the EU’s foreign policy chief, said in a Twitter post. “EU calls on all sides for rapid de-escalation and regrets all loss of life.” The tweet came as some Turkish officials warned the EU the situation in Idlib could result in a new mass flow of refugees and migrants towards Europe.
France backed Turkey, while the United Kingdom called for an emergency meeting of the UN Security Council to discuss the escalating frictions.
‘Crisis containment mode’
But despite Turkey’s anger at Assad’s forces, Ankara was unlikely to seek a confrontation with Moscow, according to Galip Dalay, a political analyst and non-resident fellow at Brookings Institute in Doha, Qatar.
The phone call between Erdogan and Putin signals Turkey was “in a crisis containment mode with Russia,” Dalay told Al Jazeera. And unless Turkey obtained a strong commitment from the United States and NATO – such as the imposition of no-fly zone arrangement over Idlib – Ankara would follow a strategy of raising the cost of the war for Moscow by striking Syrian government forces.
“Turkey will continue to target the Syrian regime but will be very careful in terms of targeting Russia,” he said. “Turkey will most likely increase its geographic scope when it comes to targeting Syrian regime forces beyond Idlib, which may expand to Aleppo and east of the Euphrates. But it will do so in a way that will not completely destroy its relations with Russia.”
In Reyhanli, a town on the Turkish side of the border, some Syrians said the tensions in Idlib was exacting a heavy price of civilians.
“People are dying,” said Maher Arjah, who crosses the Syria-Turkey border frequently for work and had arrived in Reyhanli on Friday. “Last seven months have gone from bad to worse. We heard the shelling last night, it was very loud.”

BackPage 1 of 2Next →
In this article:Erdogan, Putin