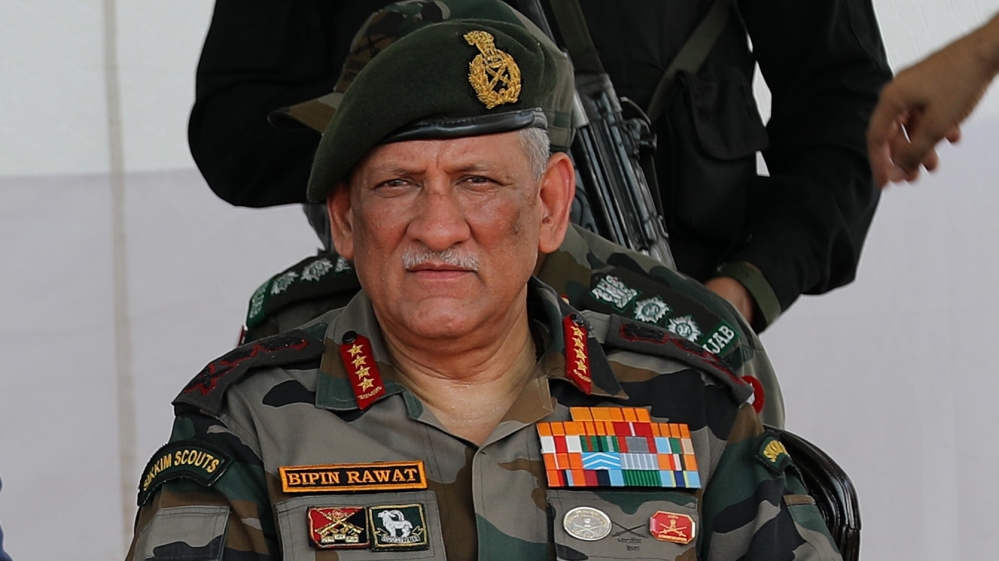 New Delhi, India – India’s newly recruited Chief of Defence Staff General Bipin Rawat has courted controversy after he claimed that so-called “deradicalisation” camps are operating in India, drawing a comparison with the internment of Uighurs in China.
“Like what we are seeing in Kashmir … we saw radicalisation happening,” Rawat said addressing the media and foreign delegates in New Delhi last week.
More:

India’s democracy may not have much time left

Recipe for solidarity: How Indian protesters are being fed

“There are people who have completely been radicalised. These people need to be taken out separately, possibly taken into some deradicalisation camps. We have deradicalisation camps going on in our country.”
Fear among Kashmiris
Rawat’s comments have caused a wave of fear among Kashmiris who claim that India wishes to do what the Chinese are doing in Xinjiang province. Human rights groups say more than a million Uighurs have been rounded up in internment camps, that Beijing dubs as “re-education camps”, to eradicate so-called religious “extremism”.
I don’t see this problem in Kashmir with the prism of radicalization.
Zafar Chowdhary, Kashmiri political analyst

“India should not follow China because India has a claim to constituent democracy,” said Professor Noor Ahmad Baba, a political analyst based in Srinagar, the main city in the Muslim-majority region placed under lockdown for the past five months.

BackPage 1 of 2Next →
In this article:general, Kashmir