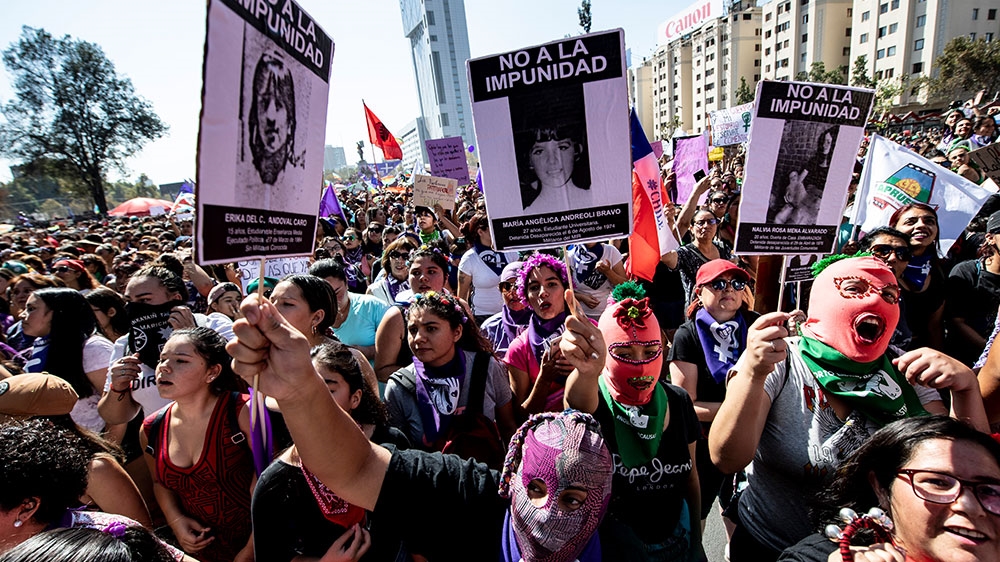 Antofagasta, Chile – Cities across Chile erupted in mass celebration and outrage on Sunday as women and their supporters rallied for International Women’s Day.
In Santiago, a plaza that has become the city’s ground zero for protests in recent months could not contain the crowd, extending for blocks along significant boulevards. Marches were under way in several cities, with others to follow Sunday evening.
More:

In Pictures: International Women’s Day around the world

This report confirms it: Almost everyone is biased against women

Nearly two million women were expected to participate in marches across the country on Sunday, day one of a two-day feminist strike. The actions are taking place in the context of broader protests against structural inequality that have been rocking the country since October 2019.
High school student demonstrations last year set off nationwide mass protests for systemic change, including the overhaul of education, health and pension systems. Protests have continued despite ongoing police crackdowns that have resulted in thousands of arrests and injuries, including hundreds of eye injuries.

The feminist movement, in recent years, has been an important factor in both broader protests and the massive scope of this year’s International Women’s Day marches, according to Katerine Tapia, a member of Encuentro de Mujeres de Antofagasta, a grassroots feminist coordination space in Antofagasta, a city 1,335km (830 miles) north of Santiago.
“It is important to take a look back before October 18, because we had a year of feminist uprising as of April 2018 and the [International Women’s Day] march last year was one of the biggest in Chile in many years,” she told Al Jazeera.
Feminist movements in Chile have a long and powerful history. The 2018 surge in activity began when students began occupying their universities to protest harassment on campus and institutional inaction.
“Those feminist occupations led to all the feminist sectors, of neighbourhood women, of women workers, to rise up, too. The list of feminist demands began to broaden with all the historical demands, but especially against institutional violence, police violence, and machista (male chauvinist) violence,” said Tapia.

The 2018 feminist resurgence and march last year set a precedent for the nationwide protests that broke out last October, Tapia said. Women have been at the forefront of grassroots organising and diverse protest actions in recent months.
“We are more present than ever in history on all combat fronts, not just on the front line but on all fronts, from assemblies to collective childcare, as well as the front lines,” said Tapia.
Echoed across Latin America, world
Chilean feminism has echoed throughout the Americas, Europe and beyond. Women in more than 50 countries worldwide have performed, A Rapist in Your Path, a choreographed chant against institutionalised rape culture developed by the Chilean feminist collective Las Tesis.
Women reprised the chant on Sunday at International Women’s Day events in Turkey, France, Brazil and several other countries.
The A Rapist in Your Path chant has been adapted to local realities, but both the lyrics and choreography contain specific references to long-standing patterns of sexual violence by Carabineros police against women and girls in Chile.
Those patterns have persisted in crackdowns on protests in recent months. From October 18 to March 5, the National Human Rights Institute, an autonomous state institution, took legal action in 112 cases of sexual violence against women and girls by authorities, in most cases Carabineros police officers. The institute has also taken action in 247 cases of torture and other cruel treatment against women and girls.

An end to state repression and political persecution was a top priority at a January assembly in Santiago, where women and non-binary people from across the country gathered to coordinate this year’s International Women’s Day actions and demands.
“That is where the general framework of the strike was established, as well as the unifying slogan: ‘We are the front line against state terrorism,'” said Tapia.
At an official Chilean government Women’s Day event on Sunday morning, President Sebastian Pinera said his government is firmly committed to working urgently for a Chile where women and men have equal rights and opportunities.
Chile’s next constitution could be written by a citizen body comprised of half women. After months of debate and rejections, both levels of Chile’s bicameral Congress passed a bill, on Wednesday, that establishes a formula for gender equality in an eventual constitutional convention, should Chileans vote in an April 26 plebiscite in favour of a new constitution and of an all-citizen convention to write it.
Last week, a bill that broadens the definition of femicide was enacted. Previously, the law was only applicable if the perpetrator was the victim’s current or former husband or common-law partner.
Across Chile, there will be marches and other protest actions on Monday – when the two-day nationwide feminist strike action is set to continue. Roadblocks and marches will get started early Monday in Antofagasta, as will wildcat strikes in some sectors.
“Even though there was no concrete call from our association at the national level, here in Antofagasta we have united with other unions,” said Patricia Romo, president of the Antofagasta chapter of the National Teachers Association.
Local members of unions representing teachers, assistant teachers, support staff, and school food-service providers at the dozens of public schools in the city have joined forces for the feminist strike.
“We will be striking on Monday,” said Romo.
Continue Reading…

Saudi locks down Qatif as coronavirus surges in the Gulf