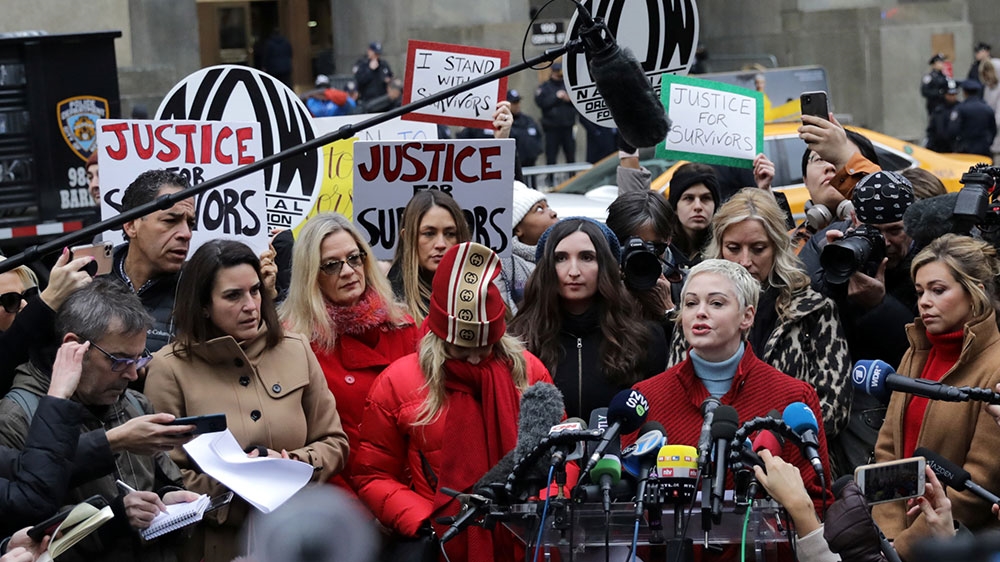 Survivors and victims of sexual violence, their supporters and others have hailed Monday’s conviction of former movie producer Harvey Weinstein as a “landmark” verdict, but said their “fight was far from over”.
Once one of Hollywood’s most powerful producers, Weinstein, 67, was convicted of sexually assaulting former production assistant Mimi Haleyi in 2006 and raping aspiring actress Jessica Mann in 2013. He faces up to 25 years in prison on the sexual assault conviction.
More:

Is #MeToo a West-only movement?

The jury acquitted Weinstein on two counts of predatory sexual assault, which carried a potential life sentence, and first-degree rape.
The case was a milestone for the #MeToo movement, which was re-energised following the accusations against Weinstein. Women across the world went public with misconduct allegations, many against powerful men in several industries.
“While it is disappointing that today’s outcome does not deliver the true, full justice that so many women deserve, Harvey Weinstein will now forever be known as a convicted serial predator,” the Silence Breakers, a group of Weinstein accusers, said in a statement.
“This conviction would not be possible without the testimony of the courageous women and the many women who have spoken out,” the group added. “Their bravery will forever be remembered in history. Our fight is far from over.”

BREAKING: A New York jury has found Harvey Weinstein guilty on two counts – criminal sexual act in the first degree and rape in the third degree. The following is a statement in response from 23 #Silencebreakers: pic.twitter.com/fXtoZ3Evzc
— TIME’S UP (@TIMESUPNOW) February 24, 2020

Prosecutors bolstered their case against Weinstein by calling several other accusers as witnesses.
One of these women, The Sopranos actress Annabella Sciorra, told jurors Weinstein came into her apartment one night in 1993 or 1994 and raped her.
Though the accusation was too old to be charged as a separate crime, prosecutors offered it to show Weinstein was a repeat sexual offender.
“For the women who testified in this case, and walked through traumatic hell, you did a public service to girls and women everywhere, thank you,” tweeted actress Ashley Judd, one of the first women to go on the record against Weinstein in the New York Times.

For the women who testified in this case, and walked through traumatic hell, you did a public service to girls and women everywhere, thank you.#ConvictWeinstein #Guilty
— ashley judd (@AshleyJudd) February 24, 2020

“Today is a powerful day & a huge step forward in our collective healing,” tweeted actress Rose McGowan, one of the Silence Breakers.

BackPage 1 of 2Next →
In this article:Fight, over'