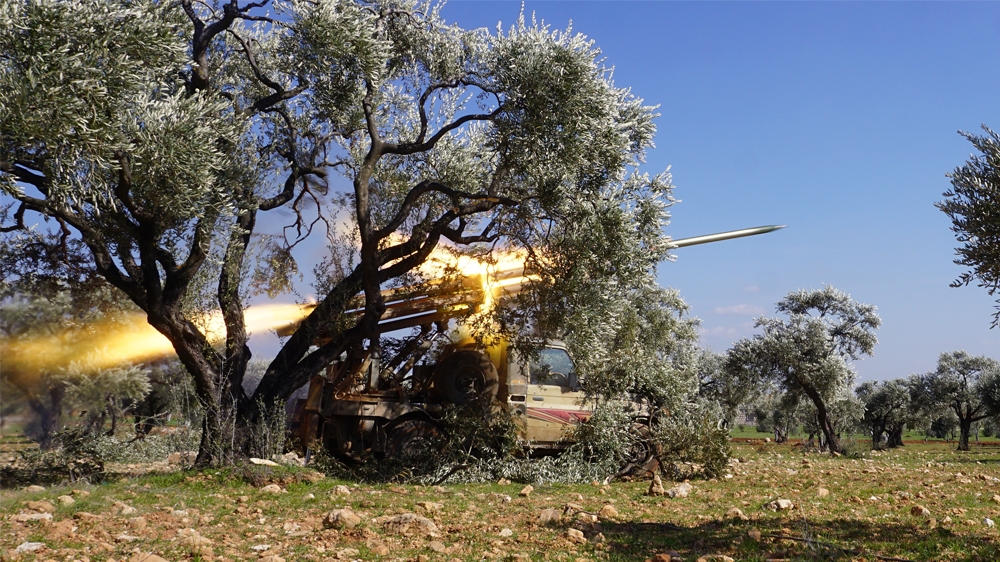 Two Turkish soldiers were killed and another five wounded in Syrian government air raids on Thursday near the northwest region of Idlib.
More than 50 Syrian forces were killed in retaliation, Turkey’s defence ministry added.
The attacks came a day after President Recep Tayyip Erdogan warned of an imminent Turkish military offensive in Idlib, where Syrian forces, backed by Russia airpower, mounted an operation to capture the region.
More:

Turkey’s Communications Director Fahrettin Altun said the soldiers – who were in Idlib to “establish peace and manage humanitarian aid operations” – were killed by “an attack carried out by the [Syrian] regime”.
Earlier this month, 13 Turkish soldiers were killed in Syrian attacks, prompting Erdogan to say Turkey will attack Syrian forces “anywhere” in Syria if another soldier was hurt.
In a statement, the defence ministry said five tanks, two armoured personnel carriers, two armoured trucks and one howitzer were also destroyed in retaliation.
The UK-based Syrian Observatory for Human Rights war monitor said at least 11 pro-government fighters and 14 on the pro-Turkey side were killed along with the two Turkish troops.
Russia – Syrian President Bashar al-Assad’s main ally – accused Turkey on Thursday of providing artillery support to rebels fighting Syrian government forces, and said fighters briefly broke through government defences in Idlib, Russian news agencies reported.

Russia’s air force carried out air raids on the pro-Turkish fighters who burst through Syrian government positions in two areas of Idlib province, allowing the Syrian army to repel the attacks, the defence ministry was cited as saying.
Turkish Defence Minister Hulusi Akar said on Thursday the United States may send Patriot missile systems to Turkey to use for security in the face of the conflict. Akar said talks with the US on purchasing Patriot systems were continuing.
“There is the threat of air strikes, missiles against our country,” Akar told CNN Turk broadcaster. “There could be Patriot support.”
Akar added Turkey will activate the S-400 missile defence system that it bought from Russia and there should be “no doubt” about this.
But he added: “We have no intentions of a face-off with Russia.”
Humanitarian catastrophe
Nearly 900,000 people, more than half of whom are children, have fled their homes in Idlib since December 1, when Russian-backed Syrian government forces pressed ahead with a military offensive to push out opposition fighters from their last stronghold in the country.
Most of them are now in Idlib and Aleppo governorates, where freezing conditions are creating a grave humanitarian situation.
At the UN Security Council on Wednesday, Russia blocked a resolution demanding a ceasefire in northwestern Syria.
In Geneva on Thursday, the United Nations refugee chief called for a halt to the fighting to allow hundreds of thousands of trapped civilians to move to places of safety.
Syrian troops backed by Russian forces have been battling since December to eradicate the last rebel bastions in Idlib and Aleppo provinces in what could be one of the final chapters of the nine-year civil war.
Residents and relief staff said Russian warplanes on Thursday resumed attacks on the towns of Darat Izza and Atareb in the northern corner of Aleppo province, where Turkish troops have set up a line of defence to thwart further advances by the Syrian army and allied Iranian militias.

In Idlib province, Turkish artillery provided cover fire for renewed rebel attacks on Nairab and the strategic crossroads town of Saraqeb, according to rebels and residents.
Al Jazeera’s Hashem Ahelbarra, reporting from Hatay, Turkey, said the rebels’ advance was only made possible with the “massive pounding of government forces’ positions by Turkish artillery earlier”.
“The momentum, the rebels say, is now in their favour and they say they are confident they’ll be able to reverse the gains made by the Syrian government over the last two months.
“However, we don’t know at this stage whether this is a comprehensive military operation that would include many Turkish soldiers on the ground to push the Syrian army from all those areas,” Ahelbarra said.
‘End the issue’
Talks between Ankara, which supports some rebel factions, and Moscow to avert a wider war and a possible direct confrontation have struggled to make progress.
Turkish officials sounded more optimistic on Thursday and one said the latest round had not been “completely without a result”.

“Russia has maintained its position that Turkey withdraws from Idlib and evacuates its observation posts since the beginning. Withdrawing from Idlib or evacuating the observation posts is not on the agenda,” the official said, who spoke on condition of anonymity.
However, various options were being discussed, including the possibility of joint patrols in the area. Both Ankara and Moscow expected their presidents to “end the issue”, he added.
The Turkish official said the artillery bombardments did not signal Erdogan had launched a full-scale operation.
Ankara and Moscow have accused each other of flouting a 2018 de-escalation agreement that allowed Turkey and Russia to set up observation posts in Idlib.
Turkey has said some of its posts in Idlib were surrounded by Syrian government forces.
Nowhere to go

The UN said on Thursday an estimated 170,000 of the 900,000 civilians forced from their homes are living out in the open.
The largest displacement since the civil war in Syria broke out nearly nine years ago comes in the thick of winter, with temperatures often dipping below zero degrees Celsius and snow covering some districts.
In Azaz, about 30km (20 miles) northwest of Aleppo city, Abu Abdallah had been stranded on the road for days.
After his family fled the air raids pounding Idlib, they moved from one village to another but have yet to find refuge. With him were his wife, four children and 20 other relatives.
“I don’t know where to take them,” the 49-year-old farmer said, sitting on his tractor. “God knows where we will go.”
Families are sleeping outside by roads and in olive groves, burning garbage to stay warm. Some children have died from the cold. Some have already been displaced more than once after fleeing battles in other parts of Syria earlier in the conflict.

The UN has called on Turkey to take in more refugees, arguing the emergency is extreme.
Turkey, which already hosts the world’s largest number of Syrian refugees with about 3.6 million people, wants to avoid another mass influx.
“We need an end to the fighting … to preserve lives,” UNHCR chief Filippo Grandi said in a statement.
“I am also appealing for neighbouring countries, including Turkey, to broaden admissions so that those most in danger can reach safety,” Grandi said.
Continue Reading…