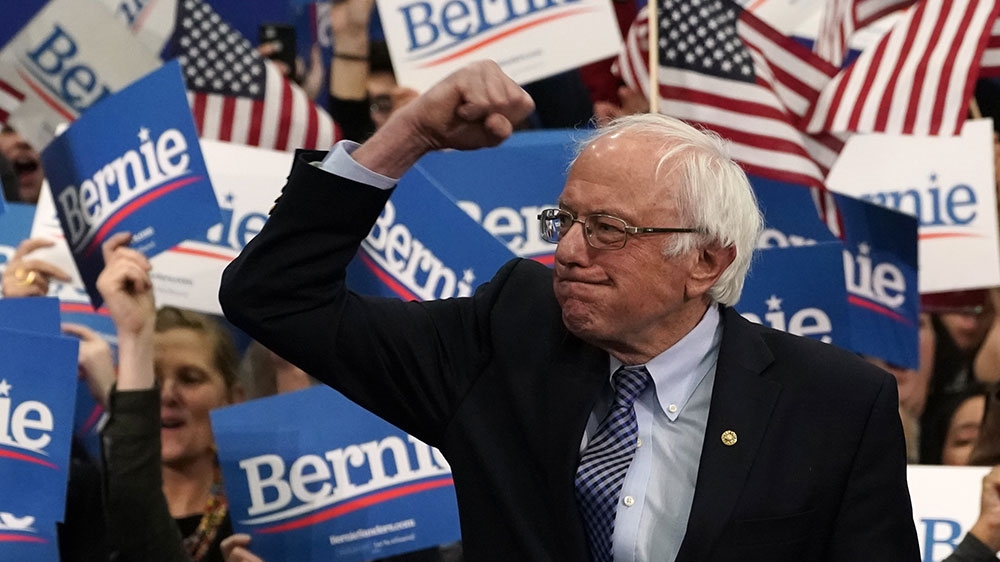 Manchester, New Hampshire – After a chaotic Iowa caucus, the Democratic Party rebounded on Tuesday night with the country’s first primary.
US Senator Bernie Sanders declared victory, crowning him the new frontrunner in the shrinking Democratic field. Former South Bend, Indiana, Mayor Pete Buttigieg came in a close second, with Senator Amy Klobuchar – who had a last-minute surge of support – in third.
More:

After ‘Iowa caucus disaster’, should the US state still go first?

But for Senator Elizabeth Warren and former Vice President Joe Biden, poor performances in the first two nominating contests adds pressure to their struggling campaigns.
Attention has now turned to Nevada and South Carolina, which will hold their nominating contests later this month. Those two states have greater demographic diversity than Iowa and New Hampshire, which are overwhelmingly white.
In New Hampshire, Sanders finished with 26 percent of the votes, while Buttigieg had 24 percent, Klobuchar 20 percent, Warren 9 percent and Biden 8 percent.
“This victory here is the beginning of the end for [President] Donald Trump,” Sanders said as he declared victory on Tuesday night.
Buttigieg said his support in Iowa and New Hampshire settled “the questions of whether we could build a campaign across age groups and different kinds of communities”.

Klobuchar meanwhile said, “The people of New Hampshire, because of you, we are taking this campaign to Nevada”.
Amy Rotenberg, a longtime supporter and friend of Amy Klobuchar on the ground canvassing in New Hampshire, said she was “absolutely thrilled” about her candidate’s performance.
“I’m really glad as a Minnesotan and someone who has been a constituent,” Rotenberg told Al Jazeera, “that the world is getting to see what we’ve known all along”.

Klobuchar speaks during a campaign event at the town hall in Exeter, New Hampshire [Kevin Lamarque/Reuters]

“Amy can really unite people and bring people in. We have to do that to beat Trump,” she said. “People thought Bernie was actually going to do better, and a substantially larger number of people expressed their preference for a moderate approach, and not for the Bernie approach.”
“But the real task is to get behind a singular candidate who can advocate that viewpoint and policy preferences,” Rotenberg added.
Chris Galdieri, an associate professor in the New Hampshire Institute of Politics at Saint Anselm College, said Buttigieg and Klobuchar should look ahead to identify “their next solid opportunity” and then scale up their campaigns by hiring staff and getting advertisements on the air in order to “maximise delegate haul”.
A path forward?
While Sanders, Buttigieg and Klobuchar now have momentum going into the next voting contests, questions remain about the viability of Biden and Warren.
Biden will likely benefit from the diversity of South Carolina, where he maintains broad support among African Americans. The former vice president left New Hampshire early on Tuesday to head south, telling supporters in South Carolina, “You can’t win a general election as a Democrat, unless you have overwhelming support from black and brown voters.”

Galdieri said the Biden campaign has to figure out whether there is a path forward for the candidate.
“Do they have the resources to go all-in on Carolina or make a play for Nevada?” he asked rhetorically. “He’s a former two-term vice president, generally liked by most Democrats, but finished fourth and fifth [in Iowa and New Hampshire] after a year of campaigning.”

Warren, on the other hand, has to do well on Super Tuesday, Galdieri said, referring to March 3 when the largest number of delegates are up for grabs in a single day.
“She had a very good run for a chunk of 2019 and seems to have slipped from that,” he added.
Bloomberg factor
In the months ahead, Americans are set to conduct the most expensive – and likely divisive – presidential election that the country has ever seen. Misinformation efforts on social media could put severe strain on the US capacity to hold a free and fair vote.
But it is another billionaire with increasing control of the airwaves who is looking past February’s relatively small primaries and caucuses towards the big-delegate contests later on.
Entering the race late, Michael Bloomberg chose to forgo the four early state contests, focusing his attention on Super Tuesday instead. The former New York City mayor came under fire this week after audio resurfaced of him defending the “stop and frisk” policy, which disproportionately affected minority communities.
Bloomberg’s campaign announced on Wednesday that he was opening an office in New Hampshire eyeing the 2020 general election.
“It’s a decisive battleground state,” said Dan Kanninen, Bloomberg’s states director, implying that all the primaries are just a long dress rehearsal for the general election.

Meanwhile, while most attention was on the Democrats, Trump’s campaign said the president was the true “victor” in New Hampshire.
His rally in Manchester on Monday night attracted far more voters than any of the opposition gatherings across the state in the run-up to the primary.
An independent Massachusetts voter who visited Manchester for the Trump rally this week, Andrea Long believes that the unlikely rise of Buttigieg is good for the Republican incumbent.
“Sanders would probably be [Trump’s] biggest competition,” Long added, explaining her election fantasy. “I’m kind of rooting for Bernie, but I just don’t think it will happen.”
Long said she remains loyal because “Trump stands by what he always does. He comes through, shows up, and brings his group together”.
“We can’t lose sight of the bigger picture,” she added, mentioning national security and the economy as her top priorities. “To keep going, we can’t expect that we’ll get in. We have to do our work.”
For Democrats, New Hampshire confirmed that their party faithful can and will rise to the occasion.
“It reflects voters’ enthusiasm for a Democratic president who will address climate change, raise the minimum wage, and make healthcare more affordable,” said New Hampshire Democratic Party Spokeswoman Holly Shulman.
“These policies are in stark contrast to Donald Trump,” she told Al Jazeera, assured that Democratic voters in New Hampshire and beyond are overcoming “[Trump’s] broken promises and special interest agenda”.
Continue Reading…