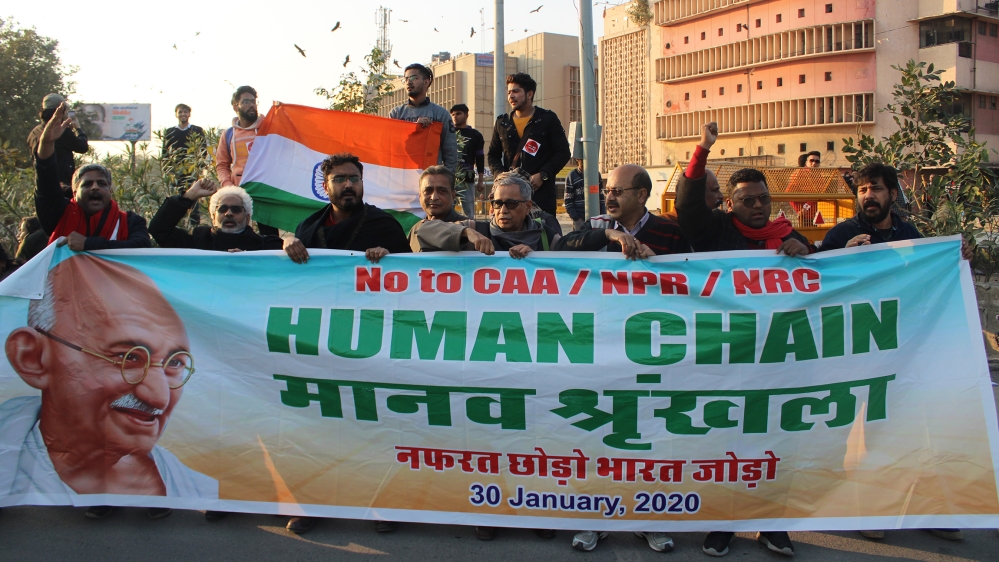 New Delhi, India – Dozens of people, carrying placards and India’s tricolour flags, formed a human chain near a Mughal-era gate in the capital, New Delhi, to mark the death anniversary of iconic freedom fighter, Mahatma Gandhi.
As more people on Thursday afternoon joined the chain and a call to observe silence in memory of Gandhi was issued by the organisers, a contingent of police stationed nearby rushed to the spot and detained them.
More:

While the police officers were bundling detainees into buses parked there, another group of people carrying a large Indian flag stretching up to several metres emerged from the other side of the road.
Led by activist Yogendra Yadav and senior Supreme Court lawyer Prashant Bhushan, the group chanted India’s national anthem and raised slogans.
“Bapu, we will fulfil your dream of a secular India,” they shouted. Gandhi is fondly referred to by many Indians as “Bapu” (father in Hindi).

Nand Kishore Shukla, a protester, said the police prevented them from remembering Bapu.
“We assembled here in memory of Gandhi, but police are not allowing us to make a human chain,” he told Al Jazeera.
Organisers said thousands of people were expected to participate in the human chain. They alleged police revoked permission at the last moment and detained people instead.
Authorities even closed three metro stations in the area and deployed policemen at several places in the capital to stop people from gathering for the protests.
“We had expected 15,000 to 20,000 people to turn up,” said Amrita Johri, one of the activists.
However, a few hundred managed to gather near the Mughal-era Red Fort and held a peaceful protest.

Advertisement. Scroll to continue reading.
BackPage 1 of 2Next →
In this article:death, Gandhi's