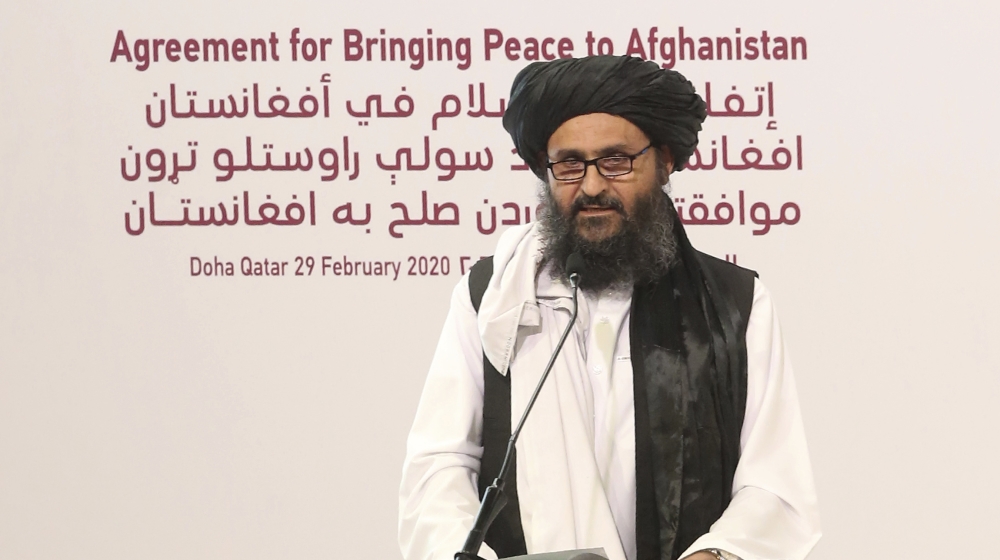 US President Donald Trump has said he held a “very good talk” with a Taliban leader in what may be the first direct discussion between a US leader and a senior Taliban official.
Taliban’s chief negotiator Mullah Abdul Ghani Baradar and Trump held a 35-minute telephone call on Tuesday, a Taliban spokesman said, with Trump later confirming the call to reporters in the White House.
More:

What does the Taliban-US agreement say?

“I spoke to the leader of the Taliban today,” said Trump. “We had a good conversation. We have agreed there is no violence. We don’t want violence. We’ll see what happens … We had actually a very good talk with the leader of the Taliban.”
The phone call came three days after the US and the Taliban signed an agreement in Doha on a US troop withdrawal from Afghanistan after more than 18 years.
“The President of the United States Trump @realDonaldTrump held a phone conversation with the Political Deputy of the Islamic Emirate, the respected Mullah Baradar Akhund. Details later,” Taliban spokesman Zabihullah Mujahid posted on Twitter.
In an emailed statement later, Mujahid said Trump told Baradar that US Secretary of State Mike Pompeo would soon speak to Afghan President Ashraf Ghani “so that the barriers against the inter-Afghan talks get removed.”
No other details were disclosed.
Acknowledging a military deadlock after nearly two decades of conflict, the US on Saturday signed a historic peace agreement with the Taliban.
The deal, signed by chief negotiators from the two sides and witnessed by Pompeo, could see the withdrawal of all American and allied forces within 14 months and allow Trump to keep a key campaign pledge to extract the US from “endless wars”.
But it could also easily unravel, particularly if the Taliban and other factions of Afghan society fail to have successful talks plotting a political way forward for the country.
Taliban ready to meet Afghan officials
Meanwhile, the Taliban on Tuesday said it is willing to meet Afghan officials, but only on the question of releasing prisoners, while diplomats raised concern that a deadlock over the issue could jeopardise the Afghan peace process.
The prisoner release dispute has emerged as a fresh impediment to peace negotiations between the armed group and the Afghan government that are due to begin on March 10.
A prisoner swap arrangement was part of the US-Taliban troop withdrawal agreement.
“The Taliban delegation has not met with the government delegation in Qatar, but authorities responsible for prisoners on both sides could meet to discuss the issue,” Taliban’s Doha office spokesman Suhail Shaheen tweeted.
The US-Taliban deal says the Afghan government will free up to 5,000 Taliban detainees by March 10. But a US-Afghan declaration commits the Kabul government only to taking part in US-brokered talks on the “feasibility” of such a release.

Taliban spokesman Mujahid told Reuters News Agency the prisoners’ release was one of the few important points that took US and Taliban negotiators a long time to agree upon.
But a day after the deal between the Taliban and US was clinched in Doha, President Ghani said the government of Afghanistan has made no commitment to free 5,000 Taliban prisoners.
The Taliban has said it will not begin talks with the Afghan government as envisaged in the agreement until the prisoner release takes place.
“Now, it is in the agreement and it is up to the US how it fulfils the commitments they made in the agreement. It is not our problem what is in the US-Afghan government joint declaration,” Mujahid said.
Some Western diplomats have raised concern that the impasse could threaten the peace process.
“If they postpone the talks then we will see a collapse of a deal. Trump doesn’t want that to happen at this juncture,” an official who has been overseeing the negotiations for two years in Doha told Reuters.
The Afghan Independent Human Rights Commission expressed concern about the prisoner release in a letter to US officials, the Taliban and the Afghan government.
The commission raised a number of questions, including on the record of activity of the individual Taliban prisoners and if they had been charged with carrying out violent crimes against civilian and military targets.