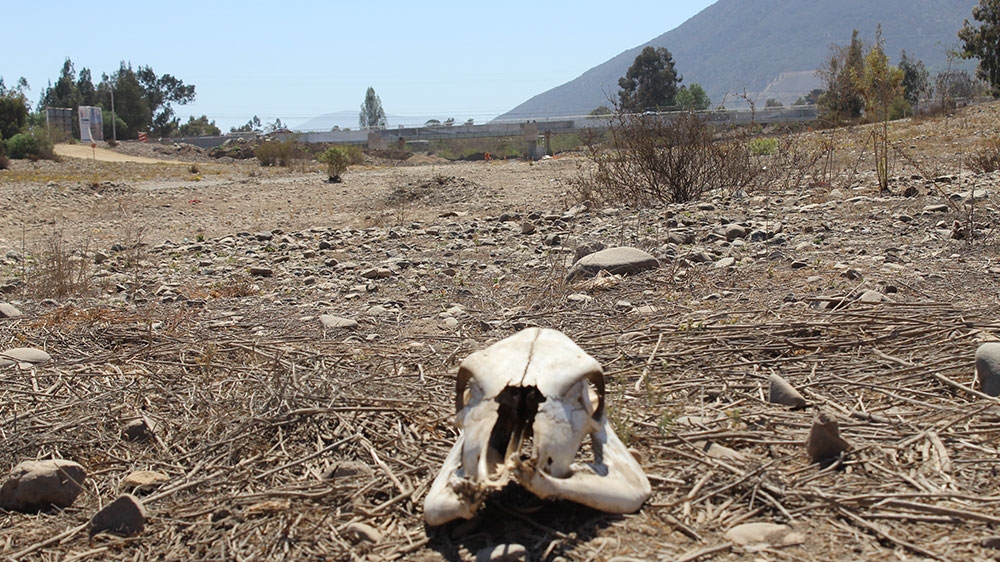 The river in Petorca, Chile, is completely dry.
The small, poor settlements that line Petorca’s River Ligua once relied on the river for its source of water. But for the past 15 years, residents here have turned to delivery trucks that bring water from elsewhere. Unlike the running water they once enjoyed, the communities’ water now is stagnant, limited and often contaminated.
The problems brought by the continuing drought have only been compounded by the ever-growing threat of the novel coronavirus, which has infected more than 328,000 and killed over 14,000 people worldwide.
Chile’s Ministry of Health has instructed people to stay at home and wash their hands, but for those living in the country’s drought-ridden areas, even such a simple task seems nearly impossible.
Claudia* lives near the parched basin in Petorca. She says every day is a struggle to ensure she has water for her family.
“I am exhausted,” Claudia tells Al Jazeera by phone.
They say you have to wash your hands. What can I do? I disinfect everything, absolutely everything, and collect the little water I have so that the kids can wash.
Claudia, a resident of Petorca

The water from her taps comes out in drips, slowly filling the sink, she says. It takes her one hour to wash the dishes. Sometimes, the trucks do not arrive to fill her village’s water cistern, leaving her community without water for days.
A mother of two young girls, she is preoccupied with the threat of coronavirus.
“They say you have to wash your hands. What can I do?” she says. “I disinfect everything, absolutely everything, and collect the little water I have so that the kids can wash.”
She sent her eldest daughter to live with her mother in a nearby city for the time being.
“For sanitary reasons,” she says. “My mother has water.”
Avocado production, Petorca’s main industry, is the cause of the drought, local activists say. Most Chilean avocados are exported, meaning increased international demand for avocados has led to a proliferation of plantations in the area.
Each tree needs 66.6 litres (about 17.5 gallons) of water a day – more than the 50-litre (13-gallon) quota of water reserved for residents, who often do not receive their full allowance.

A man cycles past a sign that reads ‘No more water theft’, along a road in Petorca town [File: Ivan Alvarado/Reuters]

Agricultural companies operating in the province have been accused by locals of illegally diverting water from the Petorca’s rivers, driving the region’s drought. Agricultural organisations claim they are only using legally sourced water, but Petorca’s local government has begun to dismantle illegal pipelines and fine the corresponding companies.
“It is not drought, it’s theft,” says Nicolas Quiroz, a member of the Movement for Water and Land Rights (MAT), a nongovernmental organisation.
Health emergency
Quiroz, who lives in Petorca, says the government has been “absent” in the crisis, and believes it has done too little, too late.
“We are in a health emergency and we aren’t able to look after ourselves as a consequence of being denied our right to water,” he says.
Maria Paz Bertoglia, an epidemiologist at the Universidad de Chile, says the lack of running water in the country’s dry zones which extend to provinces north of Petorca, is a cause for concern.
“It is a sanitary and social preoccupation – not just to prevent the spread of COVID-19, but lots of illnesses,” she tells Al Jazeera.
Bertoglia says access to clean water “should be a guaranteed right for everyone in our country”.

A farmer inspects flowers in a conservatory on a farm in Petorca town [File: Ivan Alvarado/Reuters]

During one of his first televised statements addressing the coronavirus pandemic, President Sebastian Pinera sternly advised Chileans to comply with preventive measures.
“To save lives, I ask all my compatriots to wash their hands frequently with water,” he said.
Official instructions from the Health Ministry include washing your hands under running water for 30 seconds.
It is impossible in the communities that have little water and rely on tanks and cistern trucks to provide water.
Carolina Vilches, Petorca Municipality,

To this date, the government has not publicly addressed concerns from those affected by the water crisis. The Health Ministry did not respond to Al Jazeera’s request for comment.
Petorca’s local government confirmed they are in discussions with the Health Ministry and are working to address the problem.
There are 632 confirmed cases of COVID-19 cases in Chile, 16 of which are in the Valparaiso region, where Petorca is located.
Carolina Vilches, who oversees water resources at the Petorca Municipality, acknowledges that many in the province cannot comply with the hand-washing measures.
“It is impossible in the communities that have little water and rely on tanks and cistern trucks to provide water,” she says.
‘No one should have to live like this’
She is also concerned about what effect stricter quarantine measures may have those who drive cistern trucks that bring water to residents.
“We are at high risk. We cannot maintain the hygiene standards that this situation requires,” she says, adding that she is hopeful the country’s central government will soon deliver support.

A countryman crosses a dried-up river at the Petorca town in 2008 [File: Eliseo Fernandez/Reuters]

Claudia says her kitchen is full of dirty plates. She will clean them at night, the only time there is enough water to do so. In her living room, a large pile of laundry waits to be washed – she will take it to her mother’s later in the week.
She says the lack of water impacts her physically and mentally. “I have to keep going on. For my daughters, and for myself,” she says. “But no one should have to like this. It’s not healthy.”
*Name has been changed to protect the individual’s identity. Locals and water rights activists in the region have reportedly received threats from local politicians and businesses for speaking up about their situation.
Continue Reading…

State, local officials to Trump: ‘Lead or get out of the way’

Jordan authorises use of hydroxychloroquine to treat COVID-19