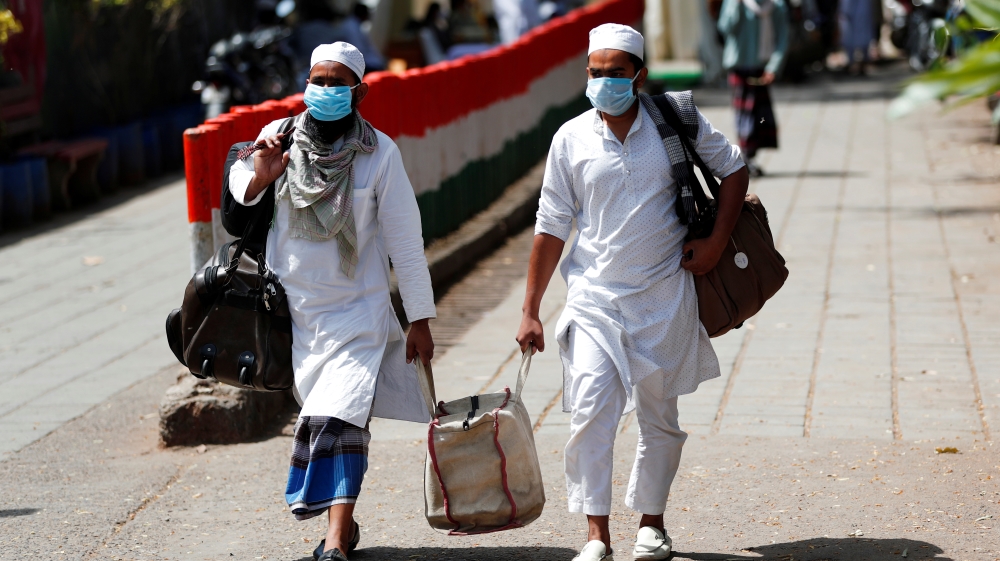 New Delhi, India – On any given day, the headquarters of Muslim missionary movement, the Tablighi Jamaat, in the narrow lanes of capital New Delhi’s Nizamuddin area, is full of activity, with hundreds of worshippers streaming in and out of the five-storey building.
But, on March 22, authorities shut its doors – with about 2,500 worshippers still inside – after it emerged that a religious gathering organised by the group on March 13-15 caused the biggest coronavirus spike in India.
More:

Made in Malaysia: How mosque event spread virus to SE Asia

Of about 4,400 COVID-19 positive cases in India, nearly a third are related to the religious gathering at the Markaz, as the Jamaat headquarters is known. The government claimed the gathering was attended by more than 8,000 people, including foreigners.
While accusing the Jamaat leadership of “carelessness” during a global pandemic, experts and civil society members also blamed the central government for its delayed response and allowing foreigners, particularly those coming from COVID-19 hotspot nations such as Malaysia and Indonesia, into India.
There was no screening even when there were reports that some people with a history of travel to the Markaz had tested positive.
Mujeeb-ur-Rehman, Tablighi Jamaat spokesman

Authorities only started screening people staying at the Markaz from March 26, a day after Indian Prime Minister Narendra Modi imposed a nationwide lockdown to control the pandemic.
On March 22, the gates of the Markaz, which also acts as a dormitory for hundreds of preachers from around the world, were shut after the city-state government in Delhi announced curbs on movement of people.
“Nobody could go out any longer,” said Mohammad Jaynul Abdin, a 64-year-old worshipper who was inside the building. He was among 2,361 people the government evacuated between March 30 and April 1.
A retired head teacher of an Islamic school in the northeastern state of Assam, Abdin has been moved to an isolation ward in New Delhi’s Rajiv Gandhi Super Specialty Hospital.
“They keep putting a pipe in my nose. How many times are they going to test?” he said in a telephone call from the hospital, complaining of the diagnostic swab samples being taken.

Virus panic across India
Meanwhile, panic gripped a large part of India as state governments launched a massive search to identify all those who had visited the Markaz and people they came into contact with later.
As of Monday, more than 25,000 Jamaat members and their contacts had been quarantined across nearly 15 Indian states.
“Our doubling rate is 4.1 days at present. But if additional cases reported due to the Tablighi Jamaat had not happened, then the doubling rate would have been 7.4 days,” Lav Agarwal, joint secretary in India’s Ministry of Health, told reporters on Sunday.
It is unfortunate that people are calling it a conspiracy and using terms like Corona Jihad.
Faizan Mustafa, Constitutional expert

But experts have warned India is not testing enough people, with an average of 93 tests per million people.
It soon became evident that most of the infected, including more than 1,000 foreigners, had travelled to the Markaz before dispersing to different parts of the country of 1.3 billion people.

In the southern Indian state of Tamil Nadu, of the total 610 COVID-19 cases, at least 570 were linked to the Markaz event.
The state government requested that Tablighi Jamaat members identify themselves, and more than 500 attendees came forward.
In Telangana, one of the worst-affected states, all 11 deaths were linked to the New Delhi congregation. At least 265 Jamaat members and their contacts tested positive.
KT Rama Rao, a minister in the Telangana government, told Al Jazeera that the state had the complete list of attendees and almost all of them and their contacts had been tracked.
In Andhra Pradesh, the state’s director general of police, Damodar Gautam Sawang, told Al Jazeera that 100 attendees were infected along with 25 others who had come into contact with them. Out of 260 cases in the state, 243 had links with the Jamaat congregation.
“We are using social influencers, religious and community elders to convince people who are reluctant to get admitted to quarantine or isolation wards,” Sawang said.
In Assam, authorities initially found it difficult to identify virus cases as families would not admit attendees had returned to the state.
By Sunday, at least 25 tested positive, with the state’s health officials not ruling out chances of community spread. More than 400 people have been quarantined out of the 835 who attended the Markaz event.

Jamaat accused of negligence
Authorities in the Delhi government have accused the Tablighi Jamaat of ignoring their order, which barred the assembly of more than 50 people.
In a 28-minute audio clip of a sermon posted on March 19 on Markaz’s YouTube channel, Jamaat chief Maulana Saad called coronavirus an “azaab” (God’s punishment) and asked his followers to run to the mosques. He also called the assertion that people gathering in the mosque will lead to more infections as “baatil khayal” (falsehood).
In a later clip, however, he urged his followers to follow the government’s guidelines on the pandemic.
As pressure built, the Delhi Police’s crime branch registered a case on March 31 under the British-era Epidemic Diseases Act, charging Maulana Saad and Markaz management with defying government regulations on social distancing. The law stipulates six months of imprisonment or a 1,000-rupee ($14) fine, or both.
Dismissing rumours of Saad going into hiding, Mujeeb-ur-Rehman, his lawyer and Jamaat spokesman, said he responded to court summons by saying he is in self-quarantine and his whereabouts are known to authorities.
Meanwhile, the Jamaat in a statement claimed that entry of participants was stopped immediately after restrictions were announced by the authorities on March 22.
Rehman pointed out that it is unfair to target the Jamaat alone.
“On March 13, the Health Ministry said it is not a health emergency. The attitude of the people in Gurudwaras (Sikh temples), temples and other religious places was also the same that it is not an emergency. It was the same attitude at the Markaz,” he said, adding that a lot of people from within the country were in fact encouraged to travel back to their home states.
In the absence of screening, many of them carried the virus back home, a fact the government only woke up to towards the end of March. “There was no screening, even when there were reports that some people with a history of travel to the Markaz had tested positive,” Rehman said.

Men wait for a bus that will take them to a quarantine facility, amid concerns about the spread of coronavirus disease in Nizamuddin area of New Delhi [Adnan Abidi/Reuters]

‘There was no response’
After the Janta Curfew (public curfew) on March 22, Rehman said Jamaat officials got in touch with local officials, requesting permission to move. “On March 25, the Markaz officials met the Sub-Divisional Magistrate and demanded passes. There was no response,” Rehman said.
“Tablighi Jamaat has been as careless as the authorities of the country,” Rehman told Al Jazeera.
The government blacklisted 960 foreign nationals on Thursday for violating visa norms.
As per government data, as many as 2,100 foreigners visited India since March for Tablighi activities. And, as recently as early March, only visitors from a few countries, including China and Italy, were being monitored.
Several Jamaat members entered India between February 27 and March 1, after attending a massive congregation at Sri Petaling Mosque in Kuala Lumpur, Malaysia, which later emerged as the source of several hundred COVID-19 infections in Southeast Asia.
The Kuala Lumpur gathering was attended by some 16,500 people and kickstarted the epidemic in Malaysia as well as in Brunei, with cases traced to Cambodia, Singapore, Thailand and the Philippines.
Rehman did not rule out the possibility of travellers carrying the infection when they arrived at the Markaz in February and earlier.
The first incident that should have alerted the government came on March 16, when a group of Indonesian preachers were taken to an isolation ward in Hyderabad, the capital of Telangana. The next day, the first among them tested positive. By March 21, all 10 had tested positive.
On March 26, a preacher with no travel history died in Indian-administered Kashmir.

Islamophobia
Faizan Mustafa, a constitutional expert, said the Jamaat did not act appropriately and missed the writing on the wall after the Indonesian preachers tested positive in Telangana.
Jamaat has remained an apolitical organisation since its founding in 1926 and works to encourage Muslims to practise Islam the way it is believed to have been practised at the time of the Prophet Mohammed.
It was established in northern Haryana’s Mewat area by Maulana Muhammad Ilyas Kandhlawi. Maulana Saad, its present chief, is Kandhalawi’s great-grandson.
The group was vilified by the mainstream media for its “carelessness”, and the country’s 200 million Muslims were blamed for spreading the virus that has killed more than 70,000 people worldwide.
#CoronaJihad trended on Twitter, with many ruling Bharatiya Janata Party (BJP) leaders calling the religious gathering “corona terrorism” – a term many said hinted at the Islamophobia of the governing party.
A central minister called the Markaz gathering a “Talibani crime”.
According to a report in Time magazine, tweets with #CoronaJihad appeared nearly 300,000 times and were potentially seen by 165 million people since March 28.
“It is unfortunate that people are calling it a conspiracy and using terms like Corona Jihad. Communalising it is not the right way. The media too has played a mischievous role,” Mustafa told Al Jazeera.
Mustafa, however, put the blame at the government’s doorstep. “The governments have to demonstrate greater rationality than religious people,” he said.
Additional reporting by A Saye Shekhar from Telangana and Sowmiya Ashok from Chennai
Continue Reading…

Life may never get back to normal, says US coronavirus scientist