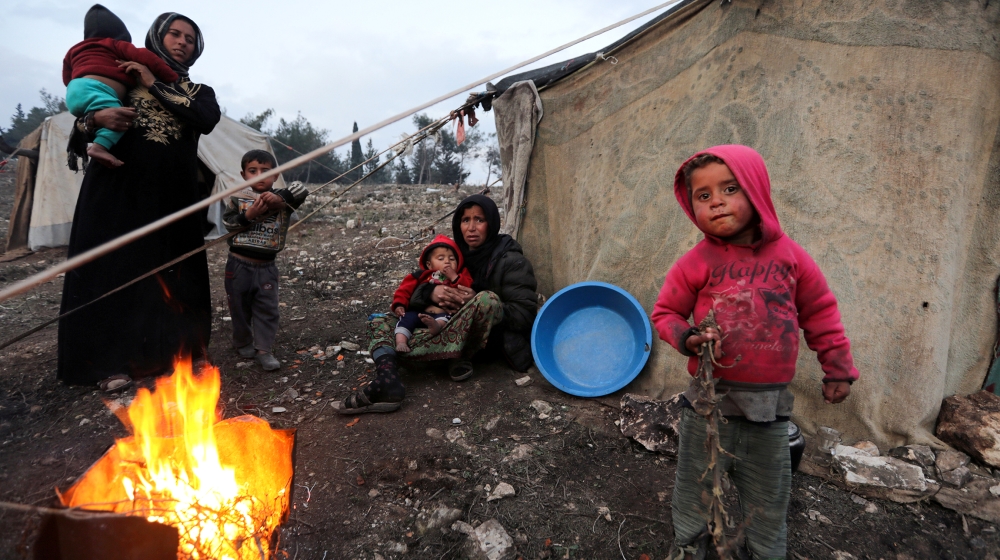 Aid workers and activists have warned of an “unprecedented catastrophe” unfolding in northwest Syria, as government forces, backed by the Russian army and Iranian militias, press ahead with a full-scale assault on opposition-held areas.
Local humanitarian staff said on Sunday that the rapidly deteriorating conditions over the past two weeks had left them struggling to cope with the large numbers of displaced people streaming into the north and west of Idlib and Aleppo provinces.
More:

Erdogan says Syrian forces must pull back from Idlib posts

“The situation is 20 times worse than what it was last year. And over the span of last year, we had 1.2 million people displaced [in northwest Syria]”, said Obaida Dandoush, who works for the Syrian NGO Syria Relief and Development.
Since the summer of 2018, Syrian government forces have been pushing to retake the last opposition stronghold in the northwest, home to more than three million people.
According to the United Nations, some 586,000 people, mostly women and children, have fled since the latest escalation of fighting began in the area in December. Between January 26 and February 2 alone, some 200,000 people were forced from their homes, with the UN warning that the air and ground attacks in Idlib were causing both “massive waves” of displacement and “major loss of civilian life”.

Major shortages
So far, the humanitarian response on the ground has fallen short of addressing the needs of the displaced and the already challenging situation has been compounded by harsh weather conditions.
Saeed Ezz al-Din, a media worker for the Turkish humanitarian organisation IHH, told Al Jazeera that there are major shortages of basic necessities, including food and clean water, medicine, warm clothes, fuel and tents.
He also said there have already been a number of deaths, including among children, due to low temperatures.
“Temporary housing is urgently needed as there is not enough space in existing camps to accommodate newcomers,” Ezz al-Din said, adding that IHH and a number of Turkish groups are working to open new camps which could accommodate tens of thousands of people.
Habib Khashouf, a member of the doctors’ union in Idlib province, also confirmed that many internally displaced persons (IDPs) have been forced to sleep in the open, without any shelter. According to the doctor, more than 2,000 families streamed into the area of Jisr al-Shughour in western Idlib province – only to find no assistance with food or shelter from any major organisations there.
Aid stopped coming to some camps in the area even before the new wave of displacement, as various international groups gradually pulled out of Syria in recent years, he said.
According to Dandoush, of Syria Relief and Development, the shortage of humanitarian assistance is threatening Syrian lives. If the flow of aid does not resume into northwest Syria, he fears that the area could see famine on the scale of the one in Yemen, described by the UN as the world’s worst humanitarian crisis.

‘Situation is so bad, it is like Judgement Day’
Displaced people who spoke to Al Jazeera also confirmed that they had not received any assistance from humanitarian organisations.
Sara, a 38-year-old widow and mother of five who asked her real name not be used, said that she fled north from the city of Saraqeb before its takeover by the Syrian government forces. Upon arriving in Aqrabat, a village surrounded by refugee camps on the Syrian-Turkish border, she found no shelter.
“I just put some mats over the mud under a tree and that was where were going to sleep,” said Sara, who like many people in northwest Syria has been displaced multiple times over the past year and a half.
Eventually, she managed to find shelter with her sister’s family and currently she shares two bare rooms with 20 people. Their monthly rent is 160,000 lira ($150) – an amount the family struggles to afford.
Sara says she has seen no local or foreign organisation distribute food or any other type of aid in the area. She has struggled to buy bread for her children, as the prices of a bag of 10 pieces, has reached 450 lira ($0.50); just a year ago she was paying 15 lira for the same amount of bread.
Skyrocketing inflation of the Syrian lira and the ongoing fighting have sent prices of all basic goods soaring across Syria.
Gas for cooking and heating has also become unaffordable for Sara’s family – a gas canister currently sells for 13,500 lira ($13) – so, to cook, they burn whatever wood they can find. Drinking water has also been hard to find, while fruit and vegetables are something they can only dream of having, Sara said.
“I keep going only for the sake of my children. The situation is so bad, it is like Judgement Day!” she said.
Continue Reading…