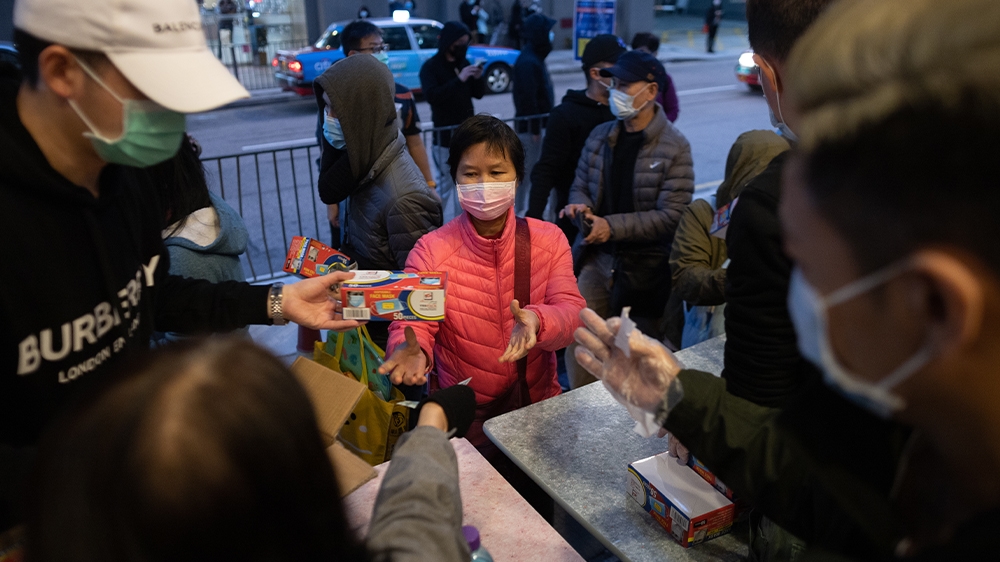 Hong Kong, China – Minnie Li has thrown herself into Hong Kong’s protest movement for the past few years, even joining a hunger strike last summer.
But these days the Shanghai native and university lecturer is greeted with flyers warning that mainland Chinese like her are not welcome – all in the name of shielding residents from potential coronavirus carriers from the mainland.
“I don’t feel hurt,” said Li. “I see this as the ‘cross-infection’ of politics in the current outbreak.”
More:

The coronavirus that emerged in central China in late December 2019 has ravaged the mainland, killing more than 1,100 people and infecting 45,000 others. Since Hong Kong confirmed its first case on January 22, there have been 49 reported cases and one death in the semi-autonomous territory.
The outbreak in Hong Kong comes right on the heels of seven months of anti-government protests, triggered in June last year by a now-abandoned extradition bill that would have allowed suspects to be sent for trial on the mainland.
The scale of the protests revealed increasing concern that Hong Kong’s freedoms – guaranteed under the “one country, two systems” framework governing the territory’s transition from British to Chinese rule in 1997 – was being undermined; a view only reinforced by the Hong Kong government’s slow response to public anger over the extradition bill and its reliance on the police to address the unrest.
That outrage has increased since the new viral outbreak, with Hong Kong residents complaining about officials’ failure to prepare for a protracted epidemic and ensure adequate medical supplies. Last week, public hospital employees went on strike to try and force the authorities to close all border crossings with the mainland.

Some observers say the coronavirus outbreak has opened a new front in the campaign against perceived interference from the mainland in Hong Kong’s internal affairs.
“The outbreak comes just when protesters have increasingly turned from mass mobilisation to everyday resistance,” said Edmund Cheng, a political scientist at City University of Hong Kong who specialises in social movements. “They condemn the government as failing to protect the public’s wellbeing so they see fit to take it upon themselves to act.”
Renewed anxieties
Despite the protesters clamouring to completely seal the border, two crossings remain open, although visitors from the mainland are now required to go into a 14-day quarantine.

The pressure to close the borders reflects not only fear about a new and unknown infection but is also rooted in the long-simmering tensions between the people of Hong Kong and mainland Chinese after tourism and migration from the mainland boomed in the wake of the 1997 handover.
In the summer of 2003, a few months after the SARS epidemic had battered Hong Kong’s economy, Beijing relaxed visa restrictions, enabling hundreds of millions of Chinese tourists to visit and help the territory recover. Under the “one country, two systems” framework, Hong Kong maintains border controls, but Beijing handles visa issuance.
The visa scheme soon mushroomed to cover 49 mainland cities, bringing in 51 million tourists in 2018, accounting for four in every five visitors to Hong Kong. By 2018, the city, which has a population of 7.5 million, had a higher visitor-to-resident ratio than even New York City, according to the Peterson Institute in Washington, DC.
The tourism boom contributed between 2 and 4 percent of the city’s GDP but sowed anger and frustration in a densely populated city proud of its Cantonese language and identity. Mainland visitors mostly speak Mandarin Chinese.
The visitors were attacked as “locusts” – infamously in a 2012 newspaper advertisement – and blamed for adding to overcrowding and other social ills.

Hong Kongers came to resent parallel traders from mainland China who took advantage of multiple-entry visas to buy products in Hong Kong to sell at a profit back home [File: Bobby Yip/Reuters]

Over the years, scandals over food safety on the mainland, including contaminated baby formula, milk and pork, fuelled a cottage industry of parallel trading, with people just across the border in Shenzhen taking advantage of a multiple-entry visa policy to buy supplies in Hong Kong and sell them on the mainland for a profit. Tensions flared as residents in Hong Kong’s border neighbourhoods blamed the mainland shoppers for pushing up the price of basic necessities.
By 2015, when the Chinese government put a brake on the expanding visa scheme and limited visits by Shenzhen residents, the issue had become fodder for nativists vowing to “defend” Hong Kong.
“[For the people of Hong Kong], our government’s lack of autonomy is no longer simply a political problem but now also a public health issue,” said Lee Siu Yau, who studies immigration policy and identity at Education University of Hong Kong.
“You can draw a straight line from the immigration issue to the current furore over keeping open some of the border crossings.”
Virus does not discriminate
These days, as discussions of ballooning infections and mounting casualties on the mainland dominate the online forums where protesters used to strategise, there was little mention of the mainland Chinese who have played a significant role in Hong Kong’s protest movement.
Wuhan-born Edward Leung, the founder of a nativist political party currently serving six years behind bars, coined the protest slogan: “Retake Hong Kong, Revolution of Our Times,” that has come to define the movement. Leung left his native Wuhan as a baby with his family a few years after the Tiananmen Square crackdown in 1989.

Since the handover, there has been increasing friction between Hong Kong people and mainland Chinese [Kin Cheung/AP Photo

Another student leader, Nathan Law – who was invited to represent Hong Kong’s protesters at US President Donald Trump’s State of the Union address in Washington, DC – was born in Shenzhen.
By some estimates, some 1 to 1.5 million Hong Kong residents are recent migrants from the mainland. In all, about 40 percent of the territory’s population was born elsewhere, overwhelmingly in mainland China.
With the coronavirus outbreak adding to the sense that the mainland is the source of Hong Kong’s woes, some in the territory see China’s Communist Party and the Chinese people as one and the same and accuse all mainland Chinese of being complicit in opposing the Hong Kong protesters.
That includes the whistle-blower doctor who died last week from the infection. When news of his death filtered out late on Thursday night, words of mourning were soon drowned out by cynical remarks and outright condemnation of the deceased doctor. To make their case, some social media users dug out the doctor’s postings in support of the Hong Kong police, a force painted as the enemy by protesters.
But when Li, the lecturer, called out the discrimination and pointed out how ineffective and misguided it would be as a “protective” measure, she said she was attacked in a barrage of nasty comments on Facebook.
“It seems in order to maintain the momentum of the movement it now has to be fuelled by hatred and xenophobia,” said Li. “That’s a real shame.”
Continue Reading…