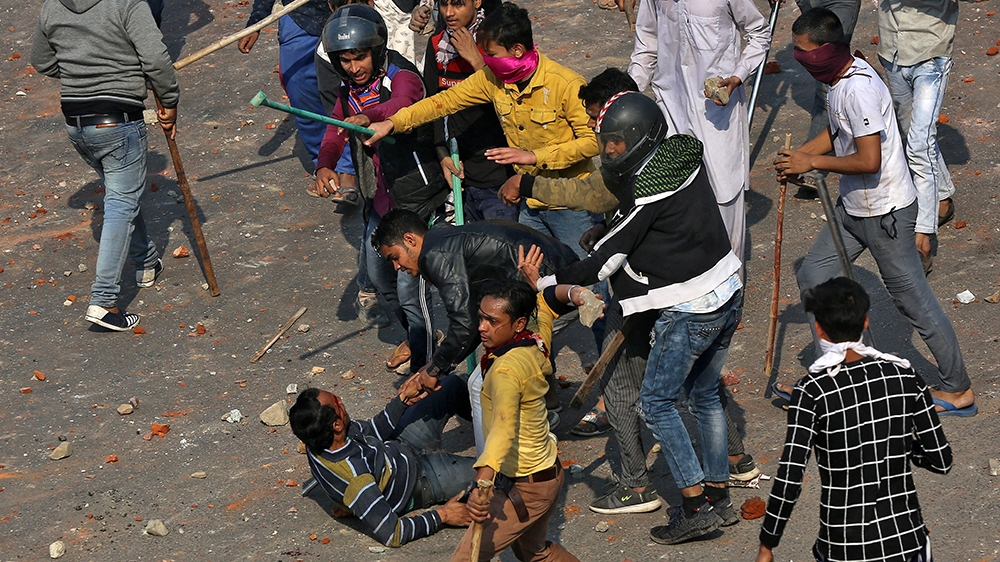 At least 24 people have been killed after India’s capital was hit by the worst religious violence in decades, which was triggered after Muslims protesting against a discriminatory citizenship law were attacked.
Nearly 200 people have been injured during three days of violence in Muslim populated areas of northeast Delhi, with police accused of looking the other way as a mob went on the rampage, killing people and damaging properties, including mosques.
India’s Hindu nationalist Prime Minister Narendra Modi, who hosted US President Donald Trump as the violence continued, has been criticised for not acting on time.
On Tuesday night, civil society members took out a peace march in a solidarity march against the violence.
More:

Mosque set on fire during Delhi’s worst violence in decades

The new citizenship bill and the Hinduisation of India

Here are the latest updates:
Wednesday, February 26
What triggered the violence?
The violence was triggered after weeks-long peaceful sit-ins in the Indian capital against a new citizenship law were attacked by Hindu nationalist mobs.

Muslims, India’s largest minority, say the Citizenship Amendment Act (CAA) passed last December discriminates against them and goes against the country’s secular ethos.
Parts of the capital descended into violence on Sunday after a ruling Bharatiya Janata Party (BJP) leader warned Muslims against continuing with peaceful sit-ins.
Over the next three days, northeast Delhi’s Karawal Nagar, Seelampur, Maujpur, Bhajanpura, Vijay Park, Jafrabad, Chandbagh, Mustafabad and Yamuna Vihar witnessed pitched battles between Hindus and Muslims.
Modi calls for calm
Prime Minister Narendra Modi has finally broken his silence on the Delhi violence, saying “peace and harmony are central to our ethos”.
“I appeal to my sisters and brothers of Delhi to maintain peace and brotherhood at all times. It is important that there is calm and normalcy is restored at the earliest,” he tweeted.
Victims of Delhi’s deadly violence fill hospital
Patients on stretchers crammed the emergency room, while relatives of the dead wailed outside a morgue as injured people continued to pour into a public hospital after three days of violence that left at least 24 people dead.
Rahul Solanki, a 26-year-old Hindu, died from a gunshot wound, according to his family. His younger brother, Rohit Solanki, said he was shot walking to a shop to buy milk.
The corridors of the Guru Teg Bahadur hospital at New Delhi’s eastern border are often crowded, but on Wednesday hundreds thronged its wards as doctors worked through the night to treat injuries.
People leave violence-affected areas
Many people living in mixed neighbourthoods, both Hindus and Muslims, have moved out in the wake of the violence.

Twitter user Md Asif Khan‏‎‎‎‎‎‎ posted a video from @imMAK02 handle that appeared to show people leaving Mustafabad area of Delhi with their belongings.
Victims of arson have accused the Delhi Police of abetting the Hindu mob during the violence.
Pakistan PM condemns violence
Pakistani Prime Minister Imran Khan has condemned the violence in Delhi, saying “whenever a racist ideology based on hatred takes over, it leads to bloodshed.”
“I want to warn our people that anyone in Pakistan targeting our non-Muslim citizens or their places of worship will be dealt with strictly. Our minorities are equal citizens of this country.”

Call for army deployment
Riot police patrolled the streets of India’s capital on Wednesday and the city’s leader called for a curfew following religious violence that claimed at least 20 lives.

BackPage 1 of 2Next →
In this article:India, violence