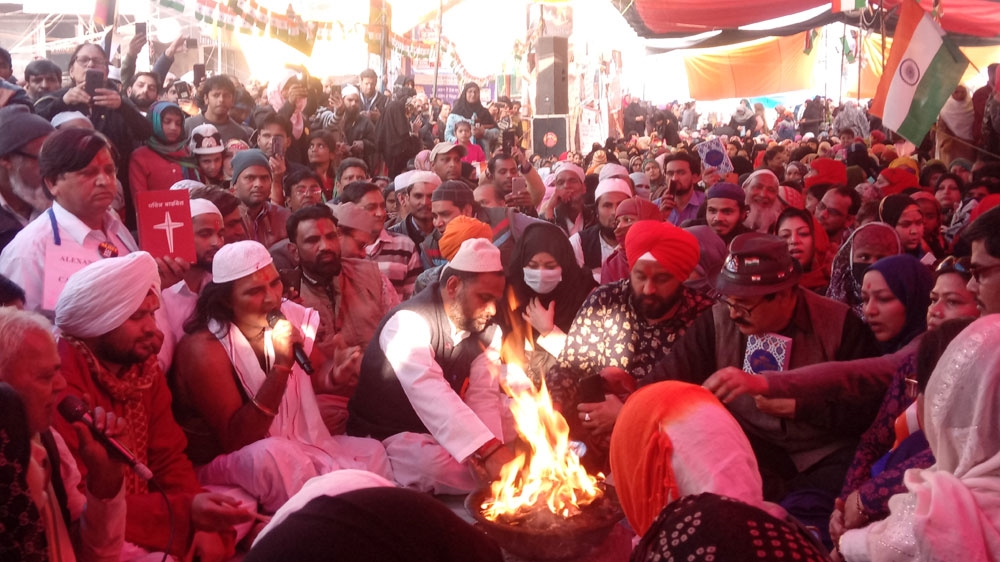 New Delhi, India – A Hindu priest lights up a sacred fire and chants from his scriptures, surrounded under a large tent by dozens of Muslim women, some sporting vermillion on their foreheads – a gesture of reverence usually displayed by the Hindus.
The priest was participating in an interfaith prayer ceremony held on Thursday at New Delhi’s Shaheen Bagh, a Muslim-dominated neighbourhood in India’s capital, where an all-women sit-in has turned into the epicentre of nationwide protests against the controversial Citizenship Amendment Act (CAA).
The CAA fast tracks Indian nationality for non-Muslims who are from three Muslim-majority neighbouring countries – Pakistan, Bangladesh and Afghanistan – and who came to India before 2015.
More:

Thousands protest in US cities against India citizenship law

Opposition parties and critics say the CAA violates India’s secular constitution by making religion a marker of citizenship, and they have challenged the law in the Supreme Court.
Faced with an ongoing National Population Register (NPR) and a proposed National Register of Citizens (NRC) across India, Muslims, who form 15 percent of India’s 1.3 billion population, fear the steps are aimed at marginalising them.
Since the passage of the CAA pushed by the governing Hindu nationalist Bharatiya Janata Party (BJP) in December, millions of Indians have hit the streets in sometimes deadly protests, demanding its withdrawal.
At Shaheen Bagh, protesters led by Muslim women have blocked a major highway since December 16, a day after police stormed into two Muslim-dominated universities to break anti-CAA protests, firing tear gas and stun grenades and wounding more than a hundred students.

‘It has united us all’
Since then, Shaheen Bagh has become a site of popular resistance, where people belonging to all religions join its women demonstrators, raising slogans such as “Save the constitution” and “People’s unity, long live”.
On Thursday, an interfaith prayer ceremony was organised at the site, where priests from India’s major religions – Hinduism, Islam, Sikhism and Christianity – read from their holy books to underscore communal amity.
“I thank [Prime Minister Narendra] Modi and [Home Minister Amit] Shah for giving us Shaheen Bagh. It has united us all,” said Sant Yuvraj, the 52-year-old priest who performed the Hindu rituals.
“The havan [sacred fire] is our response to whatever is happening in the country,” he told Al Jazeera.

At Shaheen Bagh- Muslims are protesting- Sikhs are preparing food – Christians are reading bible- and hindus performed a ‘hawan’ YesterdyThis Love & Unity is what rattles Bhakts & their Bigot Netas the mostNo wonder they all hate SHAHEEN BAGH coz they Hate United India
— Nенr_wно™ (@Nehr_who) February 7, 2020

Advertisement. Scroll to continue reading.
BackPage 1 of 2Next →
In this article:Indian, protesters