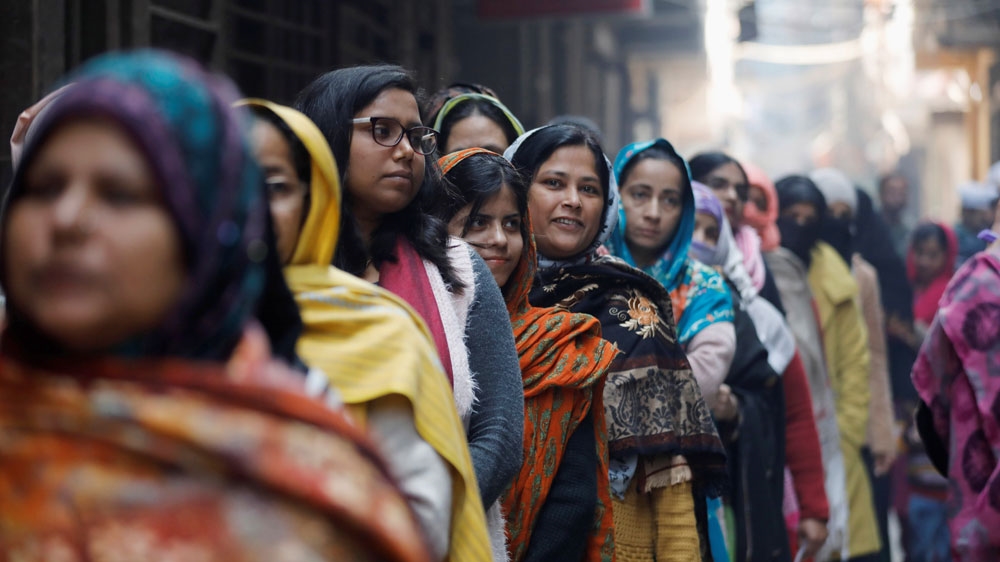 India’s capital has voted in a crucial state election, with exit polls showing the incumbent Aam Aadmi Party (Common Man’s Party or AAP) led by Chief Minister Arvind Kejriwal is set for a hat-trick victory.
Residents on Saturday lined up in long queues across New Delhi neighbourhoods, where nearly 57 percent of the capital’s 14.7 million voters cast their ballots. Results will be declared on Tuesday.
More:

In Search of India’s Soul: From Mughals to Modi

Exit polls telecast on Indian news channels shortly after the voting ended at 6pm (12:30 GMT) predicted a strong showing for the AAP, which could win more than 50 of the 70 seats.
In 2015, the party won a landslide 67 seats, and is now eyeing a second successive five-year term.
An average of nine exit polls showed Kejriwal’s party was likely to win 52 seats. “We are winning by a huge margin,” tweeted Manish Sisodia, the deputy chief minister of Delhi.

Prime Minister Narendra Modi’s Bharatiya Janata Party (BJP), which has not governed the national capital territory of Delhi for 22 years, is expected to win approximately 15 seats.
India’s main opposition Congress party, which governed the capital for 15 consecutive years before AAP unseated it in 2013, is predicted to come a distant third.
AAP, born out of an anti-corruption campaign in 2012, stunned the country by forming the Delhi government in 2013. However, Kejriwal resigned after 49 days when legislation he was pursuing could not be passed, but later went on to secure his second term in 2015.
The AAP party’s pro-poor policies have focused on fixing state-run schools and providing free healthcare and bus fares for women during its first term.
In the past two years, the Hindu nationalist BJP has lost power in key state assembly elections such as Maharashtra, Jharkhand and Madhya Pradesh, raising the stakes even further for it in the Saturday vote.
“They [BJP] have been losing power on the state level for the past 18 months to two years, including in states that are considered the Hindi heartland,” said Al Jazeera’s Elizabeth Puranam, reporting from New Delhi, referring to the Hindi-speaking north Indian states where BJP enjoys most support.
Polls amid anti-CAA protests
The New Delhi election is being seen as a test of Modi’s popularity following months of deadly nationwide anti-government protests against a new Citizenship Amendment Act (CAA) that saw thousands of people take to the streets daily in the capital and across India.
The law makes it easier for non-Muslim immigrants from three neighbouring countries who came to India before 2015 to become Indian citizens, a provision that forces critics to call the legislation anti-Muslim.
The CAA and a proposed nationwide National Register of Citizens have stoked suspicion that Modi wants to turn secular India into a Hindu nation, something his party denies.

Advertisement. Scroll to continue reading.
BackPage 1 of 2Next →
In this article:Delhi, India's