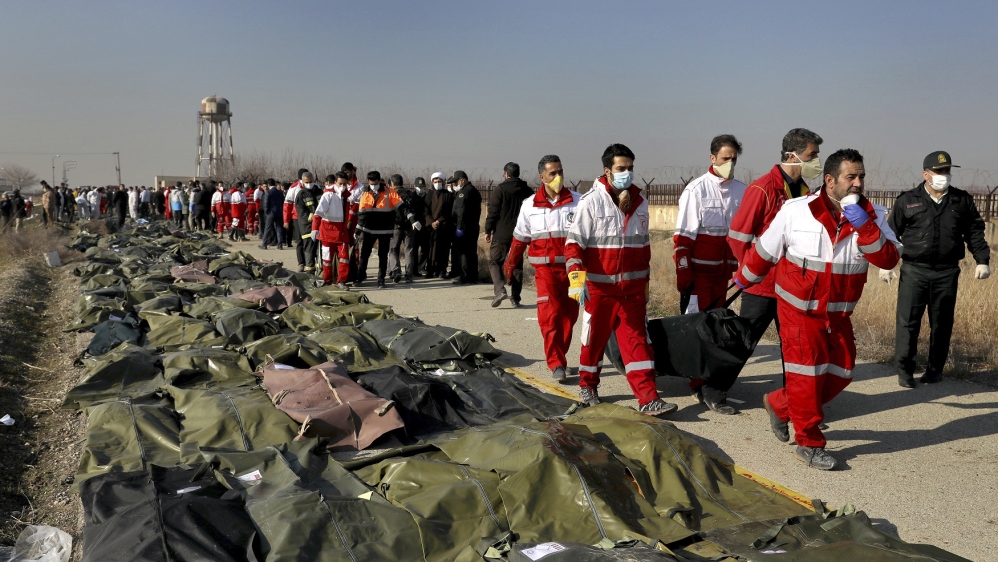 Iran’s government – grappling with public anger following the shooting down of a commercial passenger jet – has denied a “cover-up” after it took days for officials to admit that the plane was mistakenly shot down during a confrontation with the United States.
“In these sorrowful days, many criticisms were directed at relevant officials and authorities … some officials were even accused of lying and a cover-up but, in all honesty, that was not the case,” government spokesman Ali Rabiei said in remarks aired on state television on Monday.
The Kyiv-bound flight (PS752) of Ukraine International Airlines, had crashed minutes after the takeoff from the Imam Khomeini International Airport in Tehran on Wednesday, killing all 176 people on board. It happened just hours after Iran launched missile attacks on US forces in Iraq in retaliation for the US assassination of top Iranian commander Qassem Soleimani in Baghdad on January 3.
More:

Canada grieves for the dead after Iran aircraft tragedy

Rabiei insisted Iran’s civilian officials only learned on Friday that an Iranian missile had downed the plane.
“The point is that we did not lie,” he said, going on to blame the US for “spreading the shadow of war over Iran”.
Sadness turns to anger
Public anger, rumbling for days as officials repeatedly denied the plane had been hit by an Iranian missile, erupted into protests on Saturday when the armed forces admitted causing the plane crash “unintentionally”.
Videos posted on social media showed hundreds of people taking to the streets of Tehran to mourn the plane crash victims and demand accountability, turning their ire towards senior officials, including Supreme Leader Ayatollah Ali Khamenei.
Demonstrations also broke out on Sunday while Reuters news agency reported on Monday that protesters took to the streets for a third day on Monday.

Videos on social media, posted late on Sunday, recorded gunshots in the vicinity of protests in Tehran’s Azadi Square. Footage showed blood on the ground, wounded being carried and people who seemed to be security personnel running with rifles. Other posts showed riot police hitting protesters with batons as people nearby shouted: “Don’t beat them!”
“They are lying that our enemy is America, our enemy is right here,” a group outside a Tehran university chanted.
The veracity of the footage could not be independently verified.
On Monday, Tehran police denied officers had opened fire at demonstrators.
“At protests, police absolutely did not shoot because the capital’s police officers have been given orders to show restraint,” Hossein Rahimi, the head of Tehran police, said in a statement.
‘Crocodile tears’
The latest escalation in tensions between the US and Iran is rooted in US President Donald Trump’s decision in 2018 to withdraw from a nuclear deal signed between Iran and world powers in 2015, and reimpose punishing economic sanctions as part a “maximum pressure” campaign against Tehran that have severely harmed the Iranian economy.
Iran’s leadership faced mass protests in November following a surprise government decision to ration petrol and raise prices to fund cash benefits for the country’s poorest citizens.
Trump meanwhile weighed in on the recent protests in Iran, with messages posted in Persian and in English on his Twitter account praising the “great Iranian people” while telling Iran’s authorities not to “kill” protesters.
In response, Rabiei on Monday dismissed Trump’s tweets and said the Iranian people would remember he killed Soleimani, whose assassination prompted massive mourning ceremonies across Iran over several days, and was the reason many were facing economic challenges.
The US president was shedding “crocodile tears” when voicing concern for Iranians, Rabiei added.
‘Disastrous mistake’
Trump has said the goal of Washington’s departure of the landmark nuclear deal – under which sanctions were eased in return for Iran curbing its nuclear programme – was to force Tehran  to agree to a more stringent pact.
But Iran, which denies seeking nuclear arms, has repeatedly said it will not negotiate as long as US sanctions are in place.
The recent flare-up began in December when rockets fired at US bases in Iraq killed a US contractor. Washington blamed pro-Iran militia and launched air raids that killed at least 25 fighters. The militia surrounded the US embassy in Baghdad for two days, and Trump later ordered the strike on Soleimani, the head of the overseas forces of Iran’s Islamic Revolutionary Guard Corps (IRGC).
Iran retaliated on Wednesday by firing missiles at Iraqi bases housing US troops, but did not cause any casualties. The Ukrainian plane, on its way to Kyiv, crashed hours later. Many of the victims were Canadians, most believed to be dual nationals who had travelled to Iran to visit relatives there.
After days of denying responsibility, IRGC issued profuse apologies. Iran’s President Hassan Rouhani called it a “disastrous mistake”. A top commander said he had told the authorities on the day of the crash it had been shot down, raising questions about why Iran had initially denied it.
Continue Reading…

What do tense US-Iranian relations mean for China, North Korea?