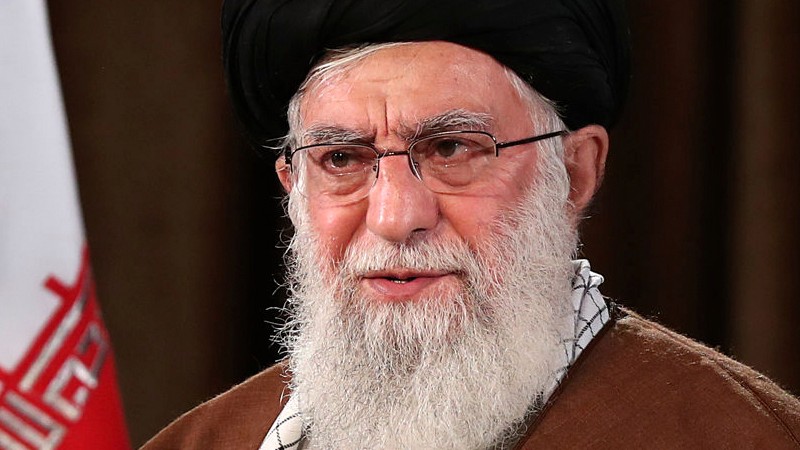 While Iranian officials in recent days have increasingly criticised those sanctions, 80-year-old Khamenei instead echoed Chinese officials about the possible origin of the coronavirus.
“I do not know how real this accusation is but when it exists, who in their right mind would trust you to bring them medication?” Khamenei said. “Possibly your medicine is a way to spread the virus more.”
He also alleged the virus “is specifically built for Iran using the genetic data of Iranians, which they have obtained through different means”.
“You might send people as doctors and therapists, maybe they would want to come here and see the effect of the poison they have produced in person,” Khamenei said.

‘Be transparent’
There is no scientific proof offered anywhere in the world to support Khamenei’s claims.
However, his comments come after Chinese government spokesman Lijian Zhao tweeted earlier this month it “might be US army who brought the epidemic to Wuhan. Be transparent! Make public your data! US owe[s] us an explanation!”
Lijian likewise offered no evidence to support his claim, which saw the US State Department summon China’s ambassador to complain. A Chinese state newspaper tweeted on Sunday another allegation trying to link the virus to Italy, similarly hard-hit by the outbreak.
Wuhan is the Chinese city where the first cases of the disease were detected in December.
In recent days, the Trump administration has increasingly referred to the virus as the “Chinese” or “Wuhan” virus, while the World Health Organization (WHO) used the term COVID-19 to describe the illness the virus causes.
A US senator from Arkansas has trafficked in the conspiracy theory it was a man-made Chinese bioweapon. Relations with China and the US have been tense under President Donald Trump amid a trade war between the nations.
Ayatollah Khamenei continued to berate the United States. “No one trusts you. You are capable of bringing into our country a drug that will keep the virus alive and prevent its eradication.
“The American leaders are liars, manipulators, impudent and greedy… They are charlatans,” he said, also labelling them “absolutely ruthless”.
‘Improbable’
For most people, the new coronavirus causes only mild or moderate symptoms, such as fever and cough. For some, especially older adults and people with existing health problems, it can cause more severe illness, including pneumonia. The vast majority of people recover from the new virus.
Scientists have not yet determined exactly how the new coronavirus first infected people. Evidence suggests it originated in bats, which infected another animal that spread it to people at a market in Wuhan. The now-shuttered Huanan Seafood Wholesale Market advertised dozens of species such as giant salamanders, baby crocodiles and raccoon dogs that were often referred to as wildlife, even when they were farmed.

An article published last week in the peer-reviewed scientific journal Nature Medicine dismissed the idea the virus was man-made. Its authors said it was “improbable” that the virus “emerged through laboratory manipulation of a related SARS-CoV-like coronavirus”.
Khamenei made the comments in a speech in Tehran broadcast live on Sunday across Iran marking Nowruz, the Persian New Year, and the Islamic commemoration known as Isra and Miraj. He had called off his usual speech at Imam Reza shrine in Mashhad over the virus outbreak.
His comments come as Iran has reported more than 21,600 confirmed cases of the new coronavirus amid 1,685 reported deaths, according to government figures released Sunday. Experts still fear Iran may be underreporting its cases.
‘Maximum pressure’
Across the Middle East, Iran represents eight of 10 cases of the virus and those leaving the Islamic Republic have carried it to other countries.
Iranian officials have criticised US offers of aid during the virus crisis as being disingenuous.
They have accused the Trump administration of wanting to capitalise on its “maximum pressure” campaign against Tehran since withdrawing from the nuclear deal in May 2018.
US sanctions have made it more difficult for Iran to access the global market.
On Sunday, Pakistan’s Prime Minister Imran Khan echoed the call on the US to lift its sanctions.
“I want to appeal to President Trump on humanitarian grounds to lift the sanctions against Iran till the COVID-19 pandemic is over,” Khan said in a tweet.
“The people of Iran are facing untold suffering as sanctions are crippling Iran’s efforts to fight COVID-19. Humanity must unite to fight this pandemic,” he said.
Continue Reading…

Jordan authorises use of hydroxychloroquine to treat COVID-19

In the US, one in four ordered to stay home over coronavirus

Malawi’s president on Saturday called the historic rerun of the presidential election “the worst in Malawi’s history” but urged the country to move on peacefully as it awaits official results of a vote the opposition is poised to win. Meanwhile, members of the Presidential Guard went to provide security for opposition candidate Lazarus Chakwera, who… 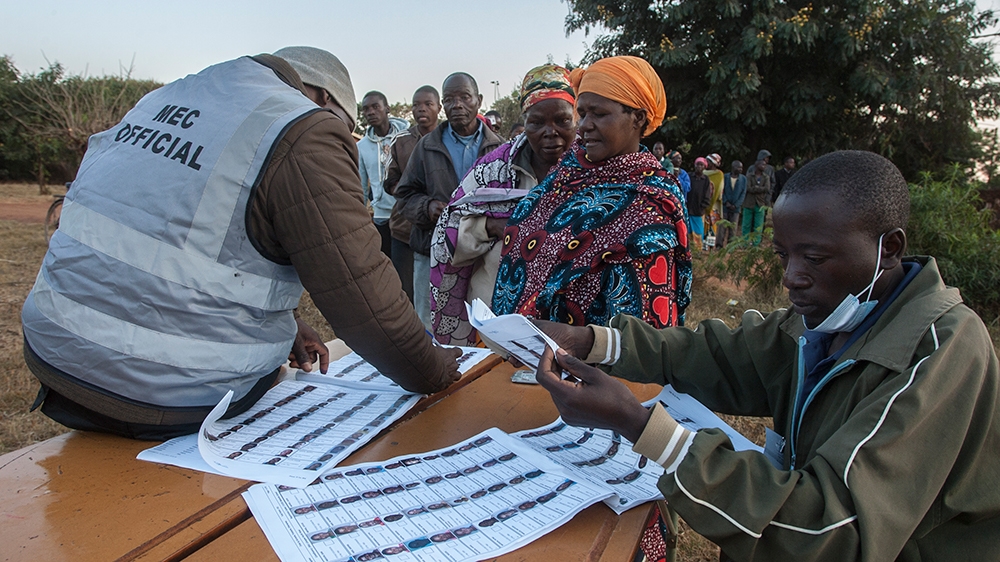 Malawi’s president on Saturday called the historic rerun of the presidential election “the worst in Malawi’s history” but urged the country to move on peacefully as it awaits official results of a vote the opposition is poised to win.
Meanwhile, members of the Presidential Guard went to provide security for opposition candidate Lazarus Chakwera, who led in the results.
President Peter Mutharika in his first public comments since Tuesday’s vote asserted that his party’s election monitors had been beaten and intimidated into staying away from their work.
“Strangely, the Malawi Electoral Commission has dismissed our complaints because our monitors were not there to report irregularities,” he told reporters.
The Malawi Human Right Commission, one of the observers, has said the election was peaceful and transparent.
A court overturned the original election last year won by Mutharika, citing widespread irregularities including the use of correction fluid on ballots. It was just the second time in Africa that a court has overturned a presidential election, following a ruling on Kenya’s vote in 2017.
Party calls for annulment
Unofficial tallies compiled by public broadcaster MBC gave opposition leader Lazarus Chakwera a dominant 60-percent lead, with the incumbent Mutharika trailing with 39 percent.    Mutharika’s comments came after his Democratic Progressive Party (DPP) administrative secretary Francis Mphepo said in a statement: “We wish to highlight several incidents that may potentially affect the integrity and credibility of the presidential election results.”
The party listed polling stations from which their monitors were allegedly excluded and said more than 1.5 million votes were marred by “violence and intimidation”.
“There is no doubt that these irregularities and malpractices will substantially affect the results in one way or another,” Mphepo continued.
“We therefore seek … a declaration that the presidential election has been inconclusive.”

There was no immediate reaction from the Malawi Electoral Commission (MEC).
Mutharika, in power since 2014, won 38.5 percent of last year’s discredited vote in which Chakwera garnered 35.4 percent.
In February, Malawi’s top court found the election was marred by widespread irregularities, including the use of correction fluid to tamper with result sheets.
The landmark ruling made Malawi just the second country south of the Sahara to have presidential poll results set aside, after Kenya in 2017.
Victory in the rerun will be determined by whoever garners more than 50 percent of the votes – a new threshold set by the court.
Some 6.8 million people were asked to vote between Mutharika, Chakwera and an underdog candidate, Peter Dominico Kuwani.
The MEC has until July 3 to reveal the results but they were expected to be announced late on Saturday or early on Sunday.
“We have had a very credible election compared to the 2019 presidential election,” Malawian human rights activist Luke Tembo told AFP news agency.
“The fact that people came out in large numbers to vote … has to be taken as a very strong message, moving forward, that Malawians will never allow their vote to be stolen.”
Continue Reading…

The newly appointed commander of Iran’s elite Quds Force said the United States killed his predecessor, Qassem Soleimani, “in a cowardly way” and promised to “hit his enemy in a manly fashion”. Esmail Qaani made the remarks on Monday at an introduction ceremony held for him by top Islamic Revolutionary Guard Corps’ (IRGC) commanders to mark the formal beginning… 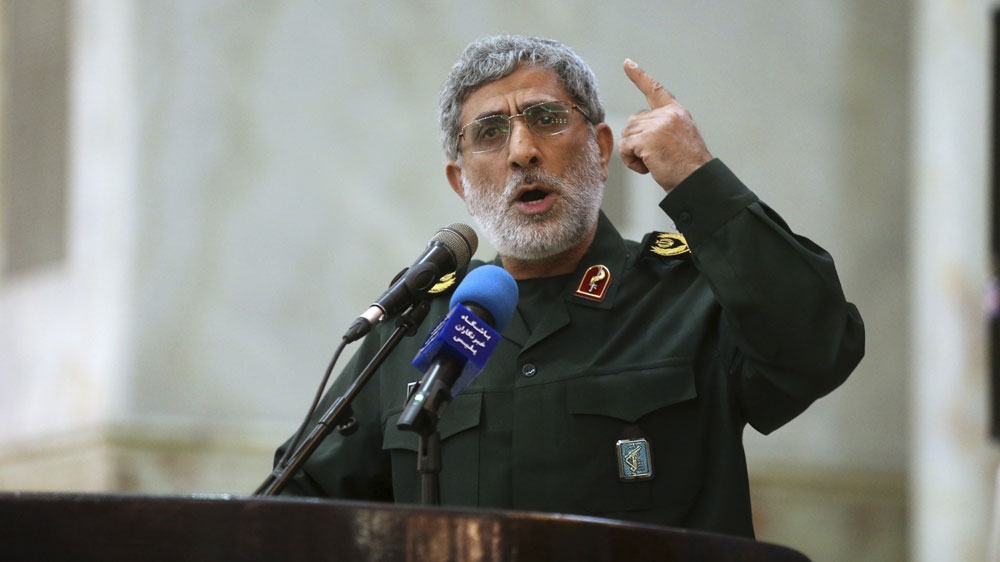 The newly appointed commander of Iran’s elite Quds Force said the United States killed his predecessor, Qassem Soleimani, “in a cowardly way” and promised to “hit his enemy in a manly fashion”.
Esmail Qaani made the remarks on Monday at an introduction ceremony held for him by top Islamic Revolutionary Guard Corps’ (IRGC) commanders to mark the formal beginning of his tenure.
More:

Soleimani and the weight of history

“They (US) hit him (Soleimani) in a cowardly way, but with God’s grace and through endeavours of freedom-seekers around the world who want vengeance over his blood, we will hit his enemy in a manly fashion,” he said.
Soleimani’s assassination in a US air strike in Baghdad on January 3 pushed the US and Iran to the brink of war, but fears of an all-out conflict eased when retaliatory Iranian attacks against US targets in Iraq on January 8 concluded without any fatalities.
Iran’s Supreme Leader Ali Hosseini Khamenei has since called for the expulsion of all American troops from the Middle East.
IRGC
The Quds Force is part of the 125,000-strong IRGC, a paramilitary organisation that answers only to Khamenei.
IRGC oversees Iran’s ballistic missile programme, has its naval forces shadow the US Navy in the Gulf, and includes an all-volunteer Basij force.
Under Soleimani, the Quds Force helped boost Iranian influence across the Middle East by building up a vast network of proxies.

In Syria, the unit played a key role in shoring up support for embattled Syrian President Bashar al-Assad after the country descended into war in 2011.
It also armed and trained militias that helped defeat the armed group ISIL (ISIS) in both Syria and Iraq.
Khamenei, while announcing Qaani’s appointment, said the Quds Force’s new chief was “among the most prominent IRGC commanders” during the 1980-1988 war between Iran and Iraq, adding the unit under the veteran soldier will follow an “identical” strategy to that pursued by Soleimani.
At the slain commander’s funeral days later, Qaani, 62, pledged to continue on his predecessor’s path “with the same force”, saying his assassination “will be reciprocated in several steps by removing the US from the region”.
Qaani’s tenure
Born in the late 1950s in the city of Mashhad in northeast Iran, Qaani joined the IRGC in 1980, a few months before Iraqi forces invaded western Iran, triggering a bloody eight-year war that killed about one million people.
Soon after the war, Qaani was appointed as deputy chief of the IRGC’s ground forces.
Although it is unclear when Qaani joined the Quds Force, Iran’s state news agency IRNA said he was appointed as the unit’s deputy in 1997, the same year that Soleimani was named its commander.
With a clear division of labour and maintaining geographically distinct spheres of influence, Soleimani and Qaani together played a strategic role in expanding Iran’s influence in neighbouring nations.
In the few public statements Qaani has made, he slammed the United States and Israel and said in a 2017 article that US President Donald Trump’s “threats against Iran will damage America”.
In 2012, the US sanctioned Qaani citing his role in financial disbursements to the Quds Force’s “elements in Africa” and other “terrorist groups”.
Continue Reading…