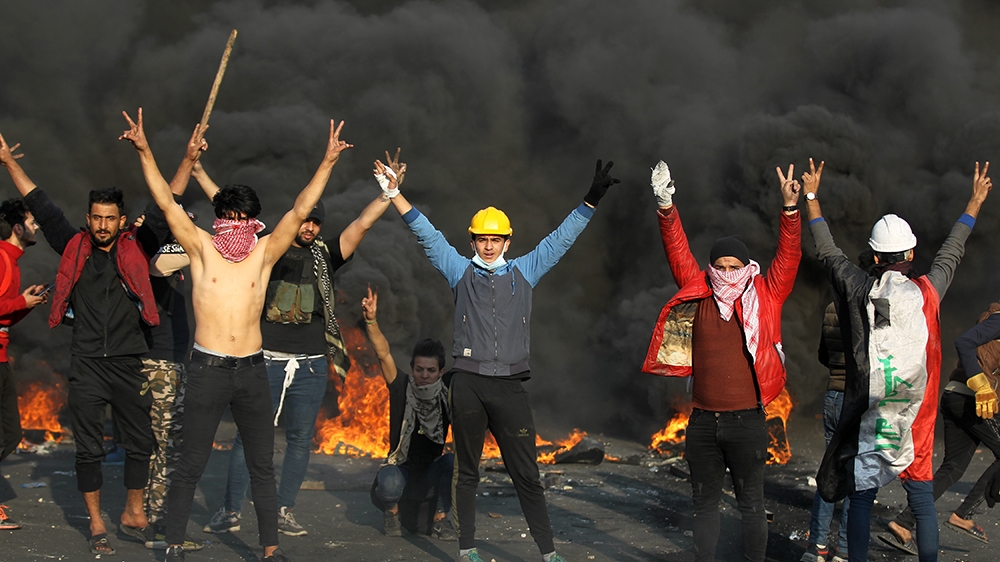 Baghdad, Iraq – Anti-government protesters have shown no sign of backing down from their demands and demonstrating against what they call the corrupt ruling elite, despite a heavy-handed response from security forces.
Clashes continued on Sunday in the capital, Baghdad, and several southern cities of Karbala, Diwaniya and Basra, a day after influential Shia cleric Muqtada al-Sadr announced he will no longer interfere in the nearly four-months-long protest movement.
More:

Observers say al-Sadr, who also heads the largest coalition in parliament, offered support and physical protection to protesters from pro-Iranian militias.
His decision, which prompted many of his supporters to pack up their tents and leave the protest sit-ins, gave the security forces the green light to attempt to disperse the protest sites on Saturday, protesters said.
At least 12 demonstrators have been killed since Saturday, the Iraqi High Commission for Human Rights said, with three in the southern Nasiriya city, and nine in Baghdad province. In total, at least 500 protesters have been killed since October.
“Yesterday’s events certainly indicate that the government felt confident that the withdrawal of the Sadrists from the protests would allow it to crush them once and for all,” said Fanar Haddad, a senior research fellow at the Middle East Institute, National University of Singapore.
“If yesterday’s events turn into a permanent break between Sadr and the protest movement, the latter risk increased fragmentation and political isolation.”
However, Haddad added, the use of brute force has failed to end the protests or diminish the momentum of demonstrators’ mobilisation.
While riot police prevented students from reaching the central Haboubi Square in Nasiriya, thousands continued to demonstrate in the streets.

At an impasse
Protesters have been demanding a complete overhaul of the political system, which they view as being mired in corruption and a vessel for sectarian politics.
Their list of demands includes a new prime minister who is independent from the current political blocs, new elections, and to hold corrupt politicians and security forces accountable for the killing of protesters.
Despite Iraqi Prime Minister Adel Abdul Mahdi resigning from his post last December, he remains in a caretaker capacity.
Candidates nominated by the government, such as the governor of Basra, Asad al-Idani, and Qusay al-Suhail of the pro-Iranian Binaa coalition, were rejected by the protesters.
“We are still in this area whereby the major political parties in parliament try to nominate someone who is close to them but relatively independent, but still within their circles,” Riad Fahmi, a former Iraqi parliamentarian, told Al Jazeera. “So this impasse will remain.”
Fahmi, who was part of Sadr’s Sairoon coalition as a member of the Communist Party, resigned from his post on October 27 in support of the protests.
He said whether the impasse can be broken depends on who could tilt the balance of power.
“So far the government and political parties don’t have the will and enough power to impose a new prime minister,” Fahmi said.
“Neither have the protesters been capable to put their own candidate forward that corresponds to the characteristics and conditions that their demands specify.”
A political outsider?
According to Ahmed Rushdi, director of Iraqi Expertise Foundation, picking a new prime minister depends on the will of al-Sadr’s Sairoon bloc as well as the second-largest bloc, Fatah, which is headed by Hadi al-Amiri and is closely tied to the pro-Iranian Hashd al-Shabi (Popular Mobilisation Forces, or PMF) militia.
“The prime minister would need to be propped up by these two blocs,” Rushdi said, adding they are in opposition to each other.
One of the chief obstacles to government formation, Haddad explained, has been the difficulty – if not impossibility – of finding a tolerable middle ground between the interests of the ruling parties and the demands on the street.
“The government of 2018 was inaugurated by papering over constitutional and political issues such as the matter of the largest bloc and the irreconcilable contradictions between the likes of Sairoun and Fatah,” he said.
“These issues were never resolved and have now been magnified by the succession of crises over the last four months.”
But whereas Sairoon and Fatah previously came in agreement to choose Abdul Mahdi, protesters want someone outside of the political blocs.
“The demonstrators are looking for someone who did not participate in the political process since 2003, is transparent, an academic, and has good relations with both the United States and Iran,” Rushdi said.
“Such figures do exist, but the question is will the political blocs give him a chance?”

Ball in politicians court
Once a prime minister is chosen, he will usher in new elections. Former MP Fahmi said the government fears designating a politically independent candidate would threaten their seats in power.
“A new prime minister will mean implementing the steps of a transitory government, such as holding early elections and holding accountable those who have committed crimes against the people,” he said.
“It is clear that the current government fears this process might threaten their positions. They are hoping that the pressure put by the protesters will dwindle and be weakened so that they can remain in office.”
Rushdi agreed, saying the political blocs are procrastinating on finding a suitable candidate because they do not want to head to new elections.
“It’s a political game and they are using the looking for a new prime minister as a camouflage to hide behind in order to hold on to their seats in power,” he said.
Fahmi said the deadlock could be resolved as “the ball is in the court of the president and politicians”.
“They have to choose a candidate who is really independent, not compromised and one that will be accepted by the people,” he said.
“It depends on them whether they are willing to concede some of their privileges and their power, which up until now they don’t want to do.”
Continue Reading…

After delay, House to send Trump impeachment articles to Senate

Washington, DC – The United States House of Representatives is set to vote on Wednesday to send two articles of impeachment against President Donald Trump to the Senate for trial. The House will also name a group of Democratic legislators to serve as managers of the impeachment case in the Senate. More: Trump impeachment: As… 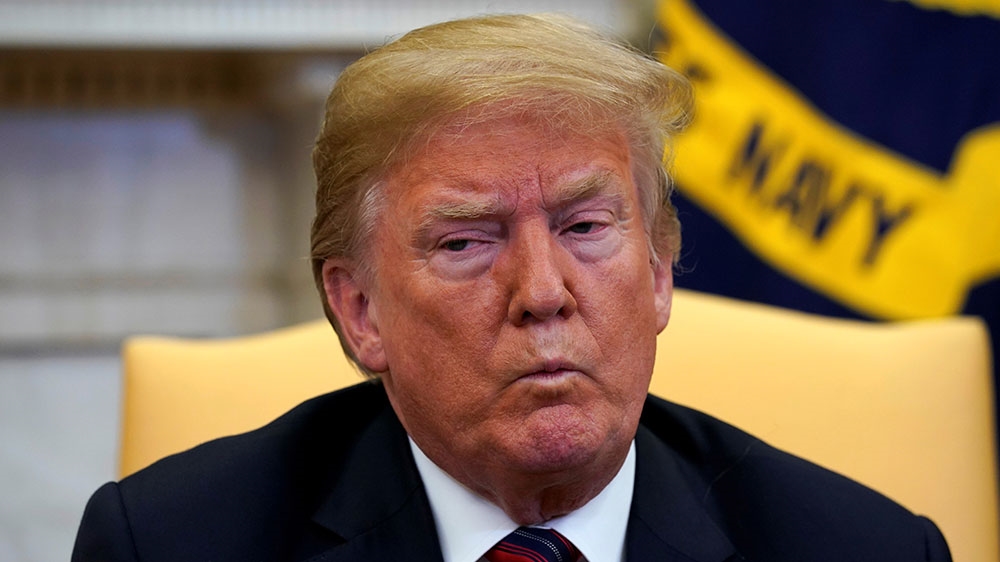 Washington, DC – The United States House of Representatives is set to vote on Wednesday to send two articles of impeachment against President Donald Trump to the Senate for trial.
The House will also name a group of Democratic legislators to serve as managers of the impeachment case in the Senate.
More:

“We are going to keep the focus on the stunning, corrupt abuse of power engaged in by Donald Trump,” said Hakim Jeffries, chair of the House Democratic Caucus.
The action sets into motion parliamentary formalities over the next several days, with a Senate trial expected to begin on January 21 and run for at least three weeks, Senate leaders said on Tuesday.
The Democratic-led House on December 18 impeached Trump for abuse of power over his efforts to get Ukraine to launch an investigation into his political rival, Joe Biden, and obstruction of Congress for refusing to cooperate with the House impeachment investigation. Trump has denied any wrongdoing, labelling the impeachment as a “hoax” and “witch-hunt”.

House Speaker Nancy Pelosi delayed sending the articles of impeachment to try and pressure Senate Republicans to ensure that there was a fair trial in the Senate. But after Senate Majority Leader Mitch McConnell said earlier this month Republicans had the votes to move forward with a trial, Pelosi announced the articles would be sent.
Senate trial
Trump is almost certain to be acquitted in the Republican-controlled Senate, where leaders have disparaged the House impeachment as a flawed attempt to damage the president ahead of the US election in November.
“This is the most rushed, most biased, and most partisan impeachment process in history,” said Senator John Thune, the Republican Whip.
“We were told at the outset, as the House was rushing through this, that there was a real sense of urgency, that they had to get this done,” Thune told reporters. “Clearly after the Speaker now having sat on it for over a month, it’s clear that all along this has been a partisan exercise on the part of the Democrats and an attempt to overturn a presidential election.”
The trial is expected to move forward with opening statements before a decision on whether witnesses will be allowed is made.
There is a small group of Senate Republicans – including Senators Susan Collins, Lisa Murkowski and Mitt Romney – who have indicated they may join with Democrats to call new witnesses and testimony in the Senate trial. The Democrats just need four Republicans to join them in calling witnesses.
Witnesses?
Democrats want the Senate to call acting Chief of Staff Mick Mulvaney and former National Security Adviser John Bolton to testify. Bolton, who refused to appear before House investigators, has said he is willing to testify to the Senate if subpoenaed.
Bolton had direct Oval Office conversations with Trump about Ukraine. He called the pressure campaign on Ukraine “a drug deal” that he refused to be part of as national security adviser, according to testimony in the House.

McConnell reaffirmed on Tuesday he has sufficient Republican votes to pass an organising resolution in the Senate that would define how the trial will be conducted.
According to McConnell, the plan would allow House managers and the president’s defence lawyers to put forth their respective cases, before a formal question-and-answer session.
“That would set up the arguments by the parties, the prosecutors and the defence, and then the written question period, and then after that, the more contentious issue of witnesses would be addressed by the Senate,” McConnell said.
Some Republicans have suggested they would want to call former Vice President Biden and his son as witnesses. Democrats will argue there is no evidence the Bidens did anything wrong.
“We will just have to wait and see what the feeling of the Senate is after listening to the arguments and the period of written questions,” McConnell said.
McConnell said there was not sufficient support among Republicans to simply dismiss the House’s articles of impeachment, an outcome Trump’s lawyers were seeking.
“We want to make sure all the president’s rights are protected in the process the Senate is considering adopting,” said Eric Ueland, the director of White House legislative affairs.
“As far as we understand it, the president’s rights are protected, including the potentiality of a motion to dismiss,” Ueland told reporters.