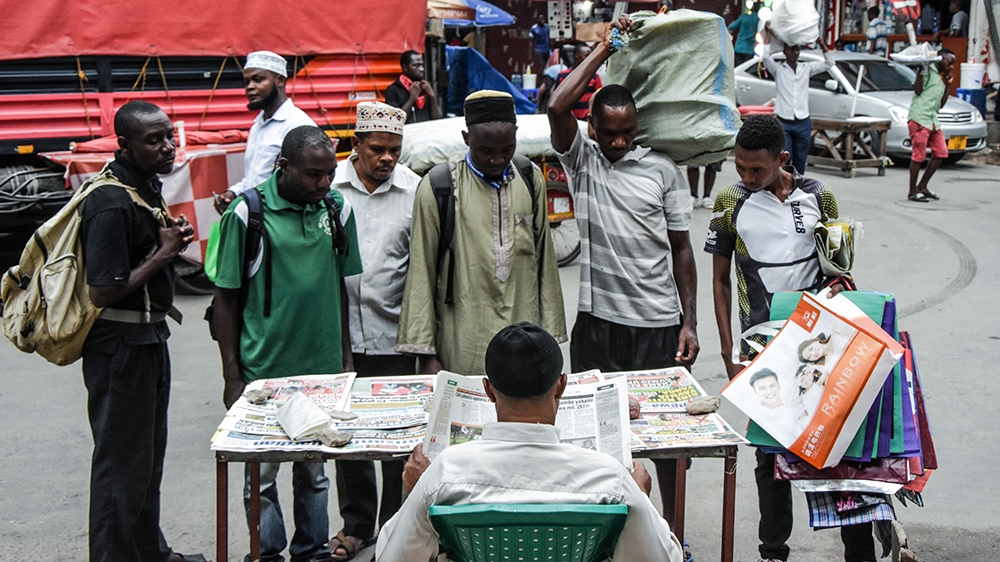 Arusha, Tanzania – Omari*, a motorcycle taxi driver, stopped outside a house in Arusha City, a tourist hub in northern Tanzania and pointed to a large, grey gate.
“A person here died from COVID a few days ago,” he said, before starting up his engine again and continuing down the city’s pothole-riddled dirt roads.
He slowed down at another house and loudly mumbled through his blue protective mask: “The father here drives the bus between Arusha and Dar es Salaam. He picked up COVID in Dar and he died about a week ago.
“This is becoming very serious,” he added. “This disease is killing a lot of people.”
No one knows for sure if these claimed deaths are just rumoured to be the result of COVID-19, the disease caused by the new coronavirus that has so far infected more than four million people worldwide and killed almost 300,000, or if they are indeed coronavirus-related fatalities that have not been included in Tanzania’s official death toll.
According to government records, 509 people in Tanzania have so far contracted the virus and 21 have died. But the official numbers, which are provided in increasingly rare updates, are being regarded with great suspicion.
Several opposition leaders and activists in recent weeks have accused the government of failing to inform the public on the extent of the disease’s outbreak and covering up the true number of fatalities.
The government has denied the allegations but many Tanzanians also told Al Jazeera, in private and behind the safety of closed doors, that they did not trust the government’s data.

Videos of night burials in cemeteries across Tanzania and corpses wrapped in plastic body bags carried out of homes by men in full personal protective equipment (PPE) suits are shared widely on WhatsApp groups and social media, raising fears about the true extent of the crisis.
“The government is hiding the number of deaths, this is 100 percent proven. How many [they’re hiding] is more difficult to say,” Zitto Kabwe, the leader of the ACT-Wazalendo opposition party and a member of parliament, told Al Jazeera.
“The health system of the country is completely overwhelmed. The situation is not very good and the government has completely controlled the data so we haven’t been able to access independent information on what’s really going on.”
‘Many deaths’
Zakia Mshare was placed in a government quarantine centre for suspected COVID-19 patients in the Njiro suburb of Arusha when she fell ill after returning from a trip last month to the coastal city of Dar es Salaam.
A day after arriving at the facility, the 64 year old slipped into a coma and passed away two days later. Mshare was tested for COVID-19 but the family was told that the results were “inconclusive”. Still, officials said her body would be handled and buried by the government.
The family arrived at the Njiro cemetery at 10am (0:700 GMT) on April 27 and began digging the grave to prepare for Mshare’s remains. They waited there until 8:45pm (17:45 GMT) when her body, along with 14 others suspected or confirmed to have died from COVID-19, arrived in a government convoy, according to Nasri Mshare, the woman’s son.
“There were four government workers with PPE suits on who unloaded the bodies and put them in the graves one by one,” Nasri Mshare said, adding that he had seen a tag attached to his mother’s body which detailed her name and cause of death as “suspect”.
She was put into the grave with the body bag still wrapped around her. The family members were able to grab short videos and blurry photos before being told they were not permitted to take any footage.
Godbless Lema, MP of Arusha City constituency for Tanzania’s main opposition party Chadema, told Al Jazeera he had also witnessed night burials being conducted by the government at the Njiro cemetery. According to Lema, two bodies were buried there on April 13, one on April 14 and 13 more on April 18.
“So many people are dying [of COVID-19] in Dar es Salaam, Arusha, Dodoma and many other places in Tanzania,” Freeman Mbowe, the chairman of Chadema, told Al Jazeera.
“We are not sure the number of deaths on a daily basis, but there are many,” Mbowe said, estimating that the daily death toll in Dar es Salaam was “no less than 30 or 40”. The figure could not be independently verified but Mbowe said the estimate was based on citizen testimonies sent to Chadema and attempts at counting the number of bodies being buried by the government.
Hassan Abbas, the Tanzanian government’s chief spokesman, told Al Jazeera that any allegation of the government covering up COVID-19 deaths was a “nonsensical argument based on [the] politicisation of everything.”
“If someone argues we have more deaths than the 16 reported [then] where are the relatives of those unreported deaths? Bring the names and all the details,” he wrote in a WhatsApp message.
“To us, it’s insanity to hear such an argument.”

Despite the pandemic, not much appears to have changed in Tanzania’s daily life [Ericky Boniphace/AFP]

The government has closed schools, including universities, across the country as part of efforts to curb the spread of the coronavirus. Passenger flights have also been suspended and the health ministry has promoted physical-distancing rules. But besides hand-washing stations installed outside shops and more Tanzanians wearing face masks, not much has changed in the country’s daily life.
Meanwhile, President John Magufuli has encouraged Tanzanians to continue gathering in places of worship and to put their faith in God to protect the country from the virus, while urging people to continue working.
Magufuli has also ordered the suspension of allowances for politicians who refuse to attend parliament after opposition legislators stopped attending sessions following the deaths of three MPs in a span of 11 days, with many suspecting COVID-19 as the cause.
‘Burying body after body’
Mussa Kwikima, a retired high court judge, passed away on April 27 at the Kairuki Hospital in Dar es Salaam. The 81-year-old was tested for COVID-19 following his death and two days later the family was notified on the phone that the results had come back positive.
Yet his death certificate, which was seen by Al Jazeera and dated on May 4, has “natural” as the cause of according to his son, Hussein Kwikima.
Hussein Kwikima said when he visited the department of health at the Ilala municipal council on April 30 to discuss the burial, he saw the worker on duty open a book titled Mazishi ya COVID-19- Swahili for “COVID-19 burials” – and that his father was the 256th name in the book.
At about 11pm (20:00 GMT) that night, the remains of Mussa Kwikima were brought to Kisutu cemetery, along with two other bodies. According to Hussein Kwikima, the workers said they had been delivering bodies to cemeteries since the morning, and in just Ilala district they had buried 16 bodies that night – all either positive or suspected cases of COVID-19.
“I felt bad for those government officers who were carrying the bodies,” said Hussein Kwikima. “You can see how hard it is on them. They were just burying body after body all day. They looked completely exhausted. You can see it in their faces that they’re being drained by this work.”

Mbowe, the Chadema chairman, argued that the disease has “gotten out of control” and blamed the government’s lack of preparations for it. Magufuli, he alleged, had failed to take the pandemic seriously from the start and has still not presented a supplementary budget to Parliament that would allocate resources to combating the virus’ spread.
“So now they’re trying to conceal the truth. They don’t want the world to know what is happening here,” Mbowe added.
Last month, Amnesty International called on the government to end a crackdown on journalists, citing examples of reporters and media outlets who had their licences suspended for reporting on COVID-19. Meanwhile, Tanzania media reported on April 29 that a prominent lawyer in Arusha had been arrested over remarks he made about the coronavirus situation, hours after a local official directed police to arrest anyone sharing information on the coronavirus that conflicts with government data.
Amid reports of further arrests, Baruani Mshale, Mshare’s nephew, also said his family was worried about going public about their experience. “Tanzanians are too scared to talk about their experiences. Even though I’m only describing the facts of what happened, people are still warning me to be careful about talking about it at all,” he said.
“It’s scary, but it’s important,” Mshale added. “We [Tanzanians] need to share our stories, communicate them and keep documenting them.”
Fatma Karume, a prominent lawyer and a government critic, told Al Jazeera that the clampdown on the public sharing of COVID-19 information was a continuation of Magufuli’s policies since his 2015 election win.
Rights groups have accused Magufuli’s administration over the years of using increasingly repressive laws to stifle freedom of speech, media freedoms and access to information, including manipulating statistics and denying citizens alternative sources of independently verified data.
During an event last week in Chato, Magufuli’s village in northwest Tanzania where he has been residing for the last several weeks, the president questioned the accuracy of Tanzania’s COVID-19 test kits and the credibility of technicians at the country’s national health laboratory after secretly sending non-human samples for coronavirus testing.
He said a sample taken from a goat and a pawpaw had tested positive for COVID-19, suggesting the kits were unreliable and that some who had tested positive were not actually infected with the virus.
The following day, Nyambura Moremi, the head of the laboratory, the only facility in Tanzania with the capacity to test for COVID-19, was suspended from her post as Magufuli launched an investigation into what he called a “dirty game” in the laboratory.
The removal of Moremi is “ensuring that we do not get a different narrative than the particular narrative that Magufuli wants us to have”, said Karume, former president of the Tanganyika Law Society.
“This is not only about keeping mouths quiet, keeping the newspapers from writing about it, or even keeping Tanzanians from talking about it; this is to the point of not allowing the scientists to research it,” she added, accusing the government of “lying” about the spread of the disease.
“We need to know the real numbers,” she said. “We need to know how badly this disease is impacting this country.”
*Name changed to protect the person’s identity
Continue Reading…