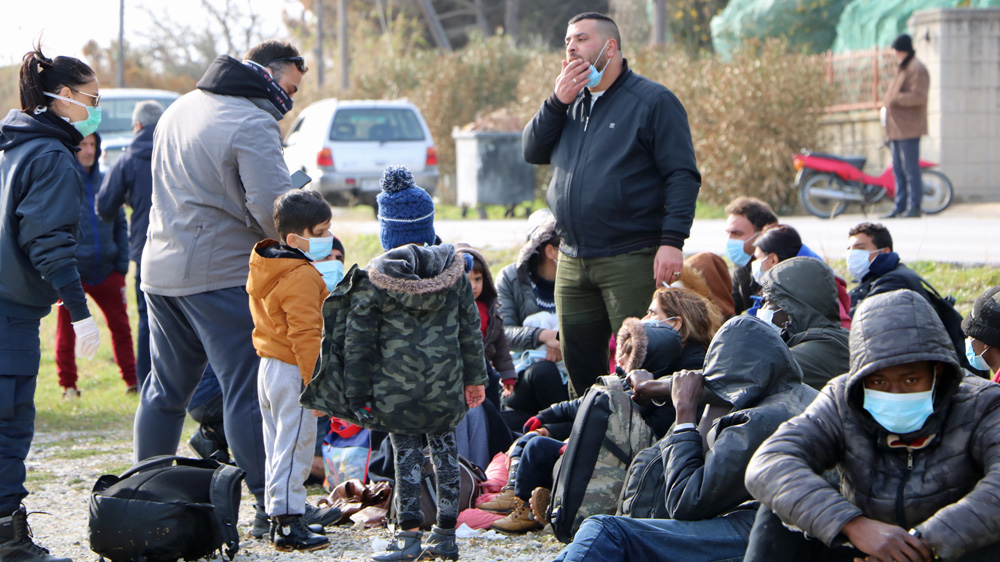 Lesbos, Greece – Refugees arriving on the island of Lesbos on Sunday told stories suggesting the Turkish government co-opted people smugglers in its policy of ushering asylum seekers west in Europe.
A group of 28 Syrians and people of several African nationalities sat on the beach near the Mytilene airport under the watchful eye of police, waiting to be taken for registration.
More:

Scuffles break out over migrant camps on Greek islands

“I was in church with my wife and the smugglers came to church and told us that if we wanted to go to Greece we could get on a boat for free. And we went with him to the beach and got on the boat,” a Congolese man told Al Jazeera without stating his name.
A man from Sierra Leone happened to be walking past the beach at the time. “I asked if I could go and they said, ‘You can go.’ I didn’t have to pay anything,” he said.
The rubber dinghy that the men arrived in was bobbing in the shallows. Police removed its outboard engine.
These experiences suggest that Turkish smugglers have been co-opted to pursue a government policy of pushing people west, but it is unclear who is paying the smugglers.
Government spokesman Stelios Petsas said in a statement, “Instead of curtailing networks of people smugglers, Turkey has itself become a smuggler.”
By Sunday evening, more than 500 people had arrived on Greece’s eastern Aegean islands of Samos, Chios and Lesbos in 13 separate boats, and rescue operations were continuing.

It was a significant rise on the 151 who arrived by boat on Saturday, and the first day of significant arrivals since Turkey opened its borders towards Europe on Thursday.
Greece closes the door
In its most dramatic reaction during the crisis to date, Greece’s prime minister announced he was freezing asylum applications following a meeting of the National Security Council.
“As of now, we will not be accepting any new asylum applications for one month,” Kyriakos Mitsotakis tweeted on Sunday evening. Greece is already processing 125,000 applications and appeals.
Greece is also invoking Article 78 of the Treaty on the Functioning of the European Union, which allows the EU to provide Greece with assistance in an “emergency situation characterised by a sudden inflow of nationals of third countries”.
Government spokesman Stelios Petsas described the influx of refugees since Thursday as a “sudden, massive, organised and concerted pressure of population movement from the east”.
“This [population] movement is being encouraged and directed by Turkey, against its obligations under the EU-Turkey Statement,” Petsas said.
The Statement, signed in March 2016, committed the EU and Turkey to protect their common borders and accept returns of third-country nationals who do not qualify for protection.
The government has also announced that due to its concerted and deliberate nature, the latest influx of refugees “has nothing to do with international asylum law, which only concerns individual cases”.
Greece will, therefore, start deporting new arrivals to their home countries whenever possible, without identifying them and recording their arrival, as is the usual procedure.
Uncontrolled flows
Sunday’s ramped up arrivals on Lesvos were not enough to create a logistical problem for the authorities, but enough to make some of the people of Lesbos anxious that they may once again face the type of uncontrolled refugee flows experienced in 2015.
Much has changed since then. Germany is no longer opening its doors to undocumented asylum seekers, and there is a barbed-wire fence stretching across Greece’s northern border.
The European Union’s relocation programme, under which other EU states took on some of Greece’s asylum-processing burden, is gone.
This time refugees will have nowhere to go but Greece, which is already processing 125,000 applications and appeals.

Some local residents blocked police vehicles from Moria camp, where new arrivals are normally registered. Others massed at the small fishing harbour of Thermi to prevent refugees from disembarking from a dinghy the coastguard towed there.
Residents of Lesbos are not just angry that Turkish President Recep Tayyip Erdogan has attempted to weaponise refugees by directing them towards Europe.
They are angry at the Greek government for not having a more effective policy, after coming to power last July promising to put migration under control.
Part of the New Democracy government’s harder refugee policy has been to allow their numbers to build up on the islands as a way of discouraging further arrivals.

Their numbers on the islands of Lesbos, Chios, Leros, Kos and Samos, which have reception centres, have more than doubled since the election eight months ago to 42,000.
“The government talked about evacuating people, and instead they’ve allowed people to pile up. Our quality of life has not improved,” municipal councillor Tasis Balis told Al Jazeera.
“We can’t use the hospital as we did before. We don’t have the personnel and equipment to pick up the extra rubbish. When refugees queue up at the ATM, we can’t get to it.”
‘Just waiting’
The government is trying to cycle people off the islands by speeding up their asylum processing. It has drawn a line under all the applications filed last year, and has asked the asylum service to process all new ones in under two months, in an effort to send rejected applicants back to Turkey as quickly as they arrive.
This has created unhappiness among older applicants and caused them to riot earlier this year.
“We had an interview this month, 26 February, but they don’t take interview. They say we only take interview from people from this year and we have an interview in 10 months,” Abdul Habib, an Afghan man, told Al Jazeera. He and his wife and two underage sons are living in a tent pitched in an olive grove at Moria camp.
It is also now anyone’s guess whether Turkey will honour its word to receive returnees, given the new political climate. Turkey and the EU signed a mutual exchange of illicit migrants in March 2016.
Even those who receive asylum have to wait to leave Lesbos. Safir and his family qualified for asylum because he worked as a security guard for US forces in Afghanistan.
“We’ve all received asylum. We’re just waiting for the tickets to leave. We’ve been waiting two months,” he said.
Continue Reading…