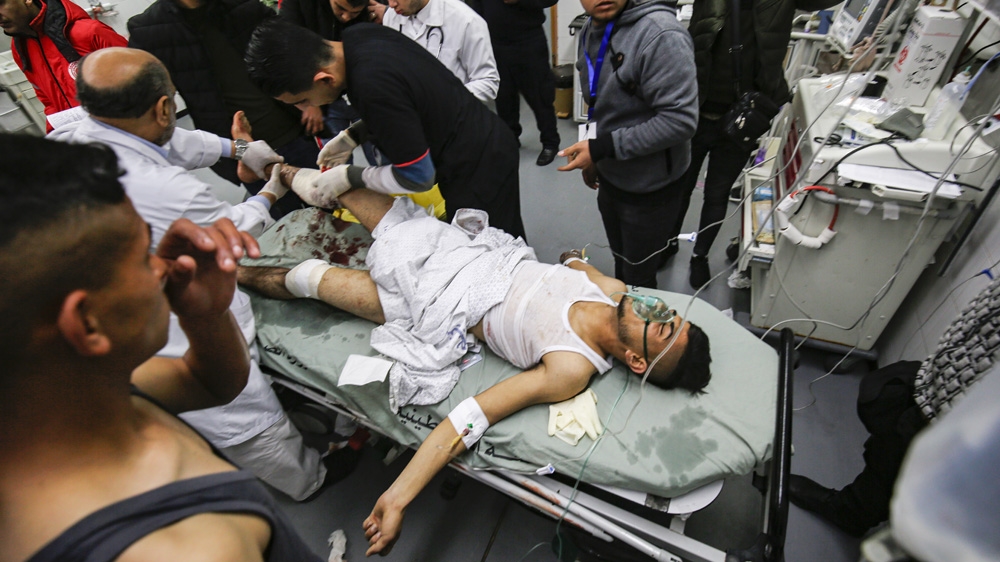 A Palestinian has been killed by Israeli forces and two others were wounded as they tried to retrieve his body in the besieged Gaza Strip, according to local media reports.
The incident took place near the separation fence east of Khan Younis in the southern part of the coastal territory, the official Palestinian news agency Wafa reported on Sunday.
The Palestinian Islamic Jihad (PIJ) faction named the deceased as Mohammed Ali al-Naim, 27, and said he was a member of the organisation.
The Israeli military said troops shot dead a Palestinian who was suspected of placing a bomb near the fence.
In a statement, the army said it “spotted two terrorists approaching the security fence in the southern Gaza Strip and placing an explosive device adjacent to it”.
“The troops opened fire towards them. A hit was identified,” it said.
Widely shared video
A video widely circulated on social media on Sunday appeared to show an Israeli military bulldozer move the body of the Palestinian man towards the separation fence.

In the clip, the sound of gunfire is heard and at least one man appears to be wounded. Other men then take away the wounded person, while the bulldozer lifts the body, reverses and moves towards the fence.
The PIJ said in a statement the video showed a “brutal crime”.
A spokesman for Hamas, the group which governs Gaza, told Al Jazeera that the incident was reflective of Israel’s occupation of the Palestinian territories and its treatment of Palestinian people.

“There are hundreds of similar crimes that haven’t been documented by the camera. Israeli occupation continues its crime without any legal or ethical deterrence,” Hazem Qassem told Al Jazeera.
A military spokeswoman later told AFP news agency that an Israeli army “bulldozer extracted the body of one of the attackers”.
According to Wafa, two men were shot and wounded in the foot while they were trying to retrieve the body of the dead man.
Ashraf al-Qedra, a spokesman for the Ministry of Health in Gaza, told Al Jazeera that two Palestinians with leg wounds arrived at the European Hospital in southern Gaza on Sunday morning.
Later on Sunday, 20 rockets were fired towards Israel from the beseiged Gaza Strip, the Israeli army said in a Twitter post. Approximately 10 were intercepted by its Iron Dome missile defence system, it added.
Palestinian factions in Gaza fired the rockets in response to the killing of al-Naim, local media reported.
“The targeting of one of our own in the Gaza Strip in a brutal way is blatant aggression and the enemy must bear the consequences,” Abu Hamza, a spokesman for the al-Quds Brigades, the PIJ’s armed wing, said on Twitter earlier on Sunday.
Continue Reading…