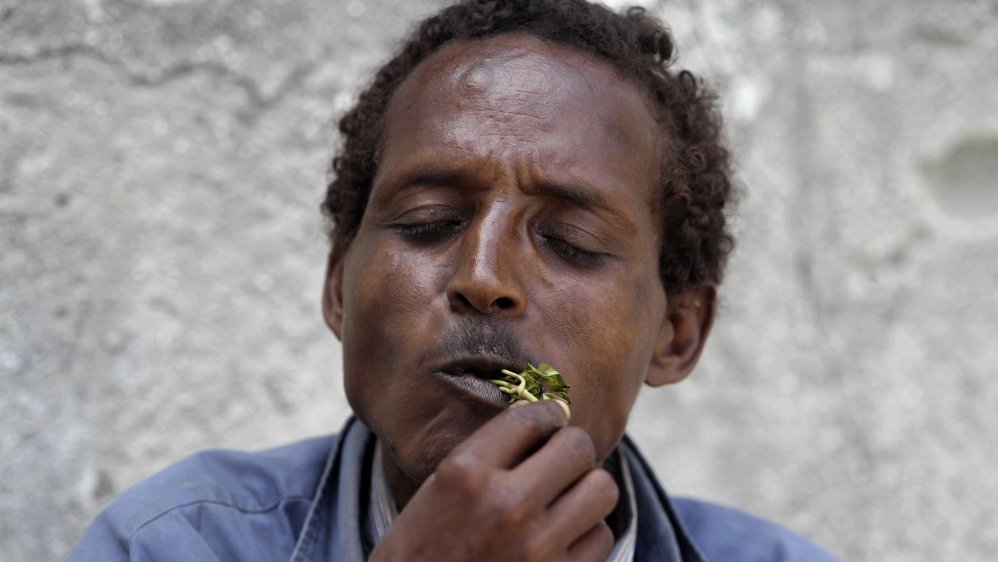 Mogadishu/Nairobi – Halima Ali Mohamud, a widow, depends on a red-stemmed, chewable green shrub to support herself and five children.
“Selling khat is the only job I have known since I was young,” the 39-year-old told Al Jazeera. “I have no other profession. It is a profitable business. With khat, I can feed my family and pay my rent as well as school fees.”
More:

What we know so far about coronavirus

‘Coronavirus: Which countries have confirmed cases?

Also called miraa, khat is a wildly popular herbal stimulant in Somalia that is said to increase energy, deepen focus and suppress appetite. The leaf starts to lose its properties the second it is plucked from the branch, and so must be sold quickly, or else its value dissipates.
In Africa, it is grown in central Kenya and in Ethiopia, with both countries exporting the leaves to Somalia.
Halima, who plies her trade in the Somali capital, Mogadishu, on the well-trodden Maka al-Mukarama street, used to receive a daily consignment of two bags from Kenya.
But things changed some two weeks ago when the Somali government announced a ban on international flights other than humanitarian ones as part of efforts to contain the spread of the new coronavirus.

Both the small-scale businesses and the farms that are the backbone of the khat trade have since been severely impacted.
Meanwhile, some officials have said that because khat is picked and moved by hand, it could be a vector for coronavirus.
“We want to also inform all the authorities at the entry points of the khat in our country and those who export khat that they have to realise that it is not time for khat chewing,” Mohamed Abdullahi Omar, the Somali federal minister of air transport and civil aviation, said at an event on March 24, during which authorities burned 40 kilograms (88 pounds) of khat, even though sales of the plant have not officially been banned.
“This is a time we need to be alert against the spread of coronavirus.”
But Dr Abdirizak Yusuf Ahmed, spokesman for Somalia’s COVID-19 taskforce, told Al Jazeera there is no scientific evidence that links khat consumption to coronavirus.
Amid the conflicting statements, the idea of khat as carrier of the virus gained ground among some in Mogadishu.
“I decided to stop chewing khat from the onset of the coronavirus outbreak,” Feysal Mohamud Nur, a 35-year-old father of six, said. “I cannot take risks of catching the virus through khat.”
‘Cancelled all over’
With breathtaking speed, COVID-19, the highly infectious respiratory disease caused by the coronavirus, has upended routines, politics and economies worldwide, while reigniting long-standing debates and highlighting societal inequalities.
As of Tuesday, the coronavirus has infected more than 787,000 people and killed almost 38,000, according to data compiled by Johns Hopkins University. In Africa, 5,255 infections and 172 deaths have been confirmed across 47 of the continent’s 54 countries.
In a bid to slow the spread of the pathogen, an increasing number of countries have closed their borders and imposed sweeping lockdowns and bans, restricting people’s movement and ordering the closure of shops and businesses.
In Kenya, the drastic measures have seen authorities shutting down markets nationwide, impacting the movement of goods, including khat.
Complicating things further, some counties such as Mandera in the north have temporarily banned khat sales, with local officials saying it spreads disease. This has sparked protests as traders say their work has been unfairly targeted.
“The latest attempts to ban khat as a potential vector for COVID-19 infection neglect the fact that the same problem applies to the issues of handling and hygiene for other fresh produce and food markets,” said Paul Goldsmith, a researcher and anthropologist who has studied khat in Kenya for more than 30 years.
In Kenya, the khat heartland is Meru county, a stronghold for the country’s governing party. When the trade slows there, it becomes a thorn in the side of the government, which relies on the locals’ support.
But the pain is felt the most by farmers such as Joseph Muturia, an 84-year-old with a 4.5-hectare (11-acre) khat plot in Meru.
Muturia said the flight ban and the closure of the markets have impacted him “very badly”, forcing him to let go 30 of his employees.
“One-hundred percent of the people here depend on khat, and now khat is not going anywhere because it was cancelled all over,” he told Al Jazeera.
While there have been no protests in the area amid the coronavirus containment measures, Muturia said he believed the situation could become tense if the lockdown remained in place for long and people were unable to earn a living to put food on the table.
“We have a lot of problems,” he said.

Back in Mogadishu, sellers and witnesses at the main khat market, Beerta Khaadka, say Ethiopian khat is still making its way to the south and central parts of Somalia through the east, via Beledweyne, which borders Ethiopia, and from the semi-autonomous regions of Somaliland and Puntland in the north.
Some, meanwhile, believe that the shutdown on Kenyan khat is motivated more by politics than public health.
“Somalia has realised the power it has over Kenyan khat,” Abdullahi Abdille Shahow, an independent political analyst specialising in the Horn of Africa said. “It is a soft underbelly – they can hit, and Kenya feels.”
The neighbouring countries have had a maritime border dispute for several years. More recently, Somalia has accused Kenya of interfering in its internal affairs, a charge denied by the latter.
“We have not had any problem related to khat, but it seems our government is playing a political game with Kenya over khat. Why is the government not stopping khat from Ethiopia as well?” Halima Sadia Abdulle, a khat trader in Mogadishu, asked.
“The Ethiopian khat came today from Hargeisa, Garowe and Galkayo and the Somali government can not stop that, but it is trying to stop the khat from Kenya only. That is not fair,” added the 37-year-old mother of five. “I have been [in the] khat business for a decade. I earn money for my family from the khat business. I pay my bills, including school fees, with the cash I earn from the khat business.”
Meanwhile, khat from Kenya still flows into the black market in Mogadishu, arriving by boat in the coastal town of Kismayu and then transported via skiffs to the capital. Chewers told Al Jazeera that when they are able to find khat, it is 10 times the normal price, from about $9 or $10 a kilogramme to $100.
‘Destroying families, draining economy’
Khat is listed as a Schedule I substance in the United States, meaning it has high potential for abuse and no medicinal properties. In 2014, the plant became a banned Class C drug in the United Kingdom.
Abukar “Qaadiid” Awale, a London-based Somali anti-khat campaigner, said khat suppresses productivity and estimated that the Somali economy loses millions per year because of this.
Acknowledging that the coronavirus pandemic has led to limited sales, Abuka described the disruption in the market as a silver lining.
“Khat should be banned in Somalia in line with the rest of the international community,” he told Al Jazeera.
“It’s holding Somalia back. It’s destroying families. It’s draining the economy,” he added.
That is a standard anti-khat argument, according to Paul Goldsmith, the researcher, but he suggested that community education would be more effective than a blanket ban, saying: “Social controls are more adaptive than forcing it underground.”
The spokesperson for the Ministry of Health in Kenya did not respond to a request for comment. The governor of Mandera, a county that banned khat, also did not respond to requests.
In Somalia, emails to the office of the president went unanswered.
Amanda Sperber reported from Nairobi and Abdalle Ahmed Munin from Mogadishu
Continue Reading…