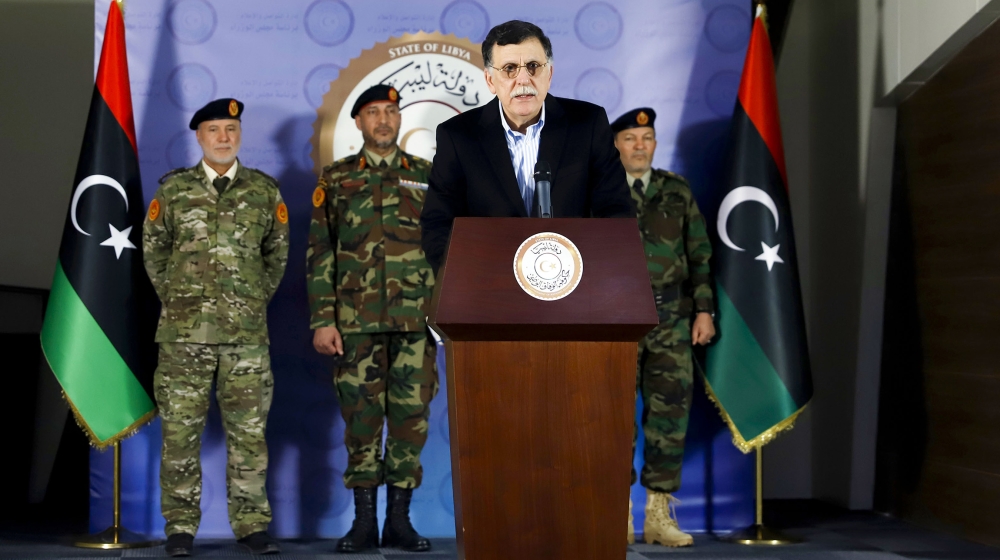 The head of Libya’s UN-recognised government Fayez al-Sarraj has said he would not resume negotiations with renegade commander Khalifa Haftar, accusing him of exploiting the coronavirus pandemic to launch a new offensive against the government.
In an interview with Italian daily La Repubblica published on Wednesday, al-Sarraj accused Haftar of having bombed “indiscriminately Tripoli, residential zones, civil institutions and even the public hospital of Al Khadra, in the centre of the capital”.
More:

“I will never sit down with Haftar, after the disasters and the crimes he committed against all Libyans,” al-Sarraj said. “We have always tried to solve our disputes through a political process, but any agreement has been soon rejected by Haftar.”
Rival governments
Libya, a large oil producer, has been engulfed in chaos since 2011 when longtime leader Muammar Gaddafi was killed in an uprising.
It is now split between two rival administrations: the Tripoli-based Government of National Accord (GNA) which is led by Sarraj, and the House of Representatives allied to Haftar and his self-styled Libyan National Army (LNA), supported by Egypt and the UAE.

“We had agreed [to] the ceasefire and the humanitarian truce, without letting our guard down,” al-Sarraj added.
“We expected that the dangers of the epidemic would have turned Haftar into a man of his word, for once. But he saw in the pandemic an opportunity to attack us.”
In April 2019, Haftar launched a military campaign to wrest control of Tripoli, but the offensive was largely stalled by forces loyal to the GNA.
Al-Sarraj added that his forces had launched a successful counter-offensive and has gained ground, up to the recent capture of the city of Sabrata, a key military base for Haftar’s army.
On Monday, the GNA said its troops seized control of three strategic coastal cities, including Sabrata, located between the capital, Tripoli, and the Tunisian border.
“Our forces took control of Surman and Sabratha and are pursuing [Haftar’s forces],” Mohammed Gnunu, GNA spokesperson said in a statement.
Al Jazeera’s Mahmoud Abdelwahed, reporting from Tripoli, said: “Government forces say that by taking Sabratha and Surman, they can easily take control of all of the entire coast and the highway connecting Tripoli to the Tunisian border. GNA forces can also join Amazigh or Berber fighters in the city of Zuwara and can move on al-Watiya airbase, a strategic airbase and stronghold of Haftar southwest of the capital.”
Earlier on Monday, Colonel Muhammad Qanunu said the GNA’s air defences intercepted planes belonging to Haftar in the Abu Grain area and shot down the two Chinese-made Wing Loong aircraft and one Russian Mi-35 helicopter.
Continue Reading…

What US funding cut means for WHO’s fight against coronavirus