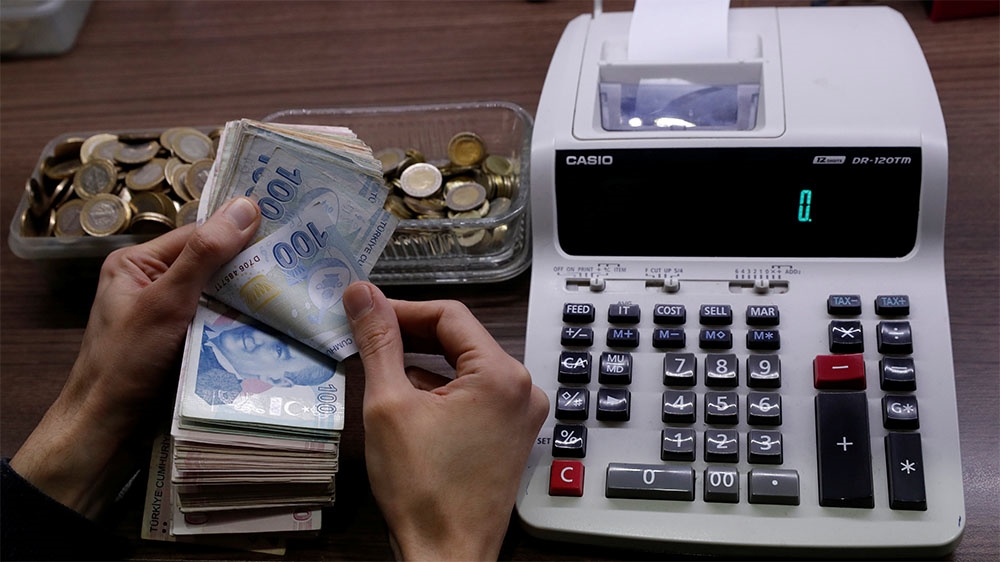 The recently embattled Turkish lira edged up on Friday and held gains from late Thursday following reports that officials held talks with counterparts in Tokyo, London and elsewhere over new possible foreign funding.
The lira, which hit a record low of 7.269 last week, stood at 6.917 against the dollar at 08:47 GMT, after data showed that measures taken to curb the coronavirus pandemic weighed heavily on the fiscal budget and on housing sales
More:

Risks are mounting for Turkey’s economy

Treasury and central bank officials have held bilateral talks in recent days with counterparts from Japan and the United Kingdom on setting up currency swap lines, and with Qatar and China on expanding existing facilities, Reuters news agency reported on Thursday, citing officials.
Cevdet Yilmaz, the ruling AK Party’s deputy chairman for foreign affairs, confirmed that Turkey is seeking swap agreements.
“We are having negotiations with different central banks for swap opportunities,” he told a panel discussion on Thursday, adding: “It is not only the US, there are also other countries.” He did not elaborate further on details.
The push comes after the lira has fallen under severe pressure, limiting Ankara’s capacity to address concerns over its depleted foreign reserves and hefty debt obligations.
An official told Reuters that Turkey was feeling confident after the talks. But it was unclear how close it may be to securing any deals as the coronavirus pandemic stretches governments and central banks like never before.

Currency spiral risk
Turkey’s Treasury ministry, Japan’s finance ministry and the Bank of England declined to comment.
The People’s Bank of China did not respond to Reuters’ faxed request for comment. Qatar’s government media office did not respond to a Reuters query about expanding the swaps with Ankara.
If Turkey cannot secure tens of billions of dollars in funding, analysts say it risks a currency spiral similar to 2018, when the lira briefly shed half its value in a crisis that shook emerging markets.
The government has said its forex buffer is adequate. This week, President Recep Tayyip Erdogan blamed the lira’s fall on “those who think they can destroy our economy, put shackles on our feet, corner us by using financial institutions abroad”.
The diplomatic effort comes as the coronavirus pandemic is expected to trigger a recession.
It suggests Turkey is looking beyond its preferred source of funding, the US Federal Reserve, and may have to consider tougher decisions on interest rates or options it has dismissed, such as the International Monetary Fund (IMF) assistance or capital controls, investors say.
“Talks are in a better position especially with Qatar, China and Britain,” said a senior official, who requested anonymity. “I am optimistic that a certain amount of resources will be provided” and an agreement should “not take too long”.
Two other officials said Turkey reached out to Japanese representatives about possible funding, with one adding that talks need to speed up if a swap line is to be secured.
The Turkish central bank’s net foreign currency reserves have dropped to $26bn from $40bn this year. Bankers say that was largely due to state lenders selling some $30bn in FX markets to support the lira, which has nonetheless fallen 15 percent this year.
The country’s 12-month foreign debt obligations are $168bn, with about half due by August, while disappearing tourism income has inflated its monthly current account deficit to nearly $5bn.
“I don’t really see how Turkey can navigate this period, especially considering their external vulnerabilities,” said Shamaila Khan, director of emerging markets debt at AllianceBernstein in New York.

‘Monitoring the lira’
Turkey has underestimated its risks “unfortunately for months now” said Khan, who was among hundreds of investors on a conference call with the finance and treasury minister, Berat Albayrak, last week.
Albayrak said reserves are adequate and he was optimistic about negotiating new funding with fellow G20 nations and trade partners, according to participants and a brief ministry summary.
He singled out countries with whom Turkey has large trade deficits and promised an update to existing swap lines, one investor said. Turkey has currency swap facilities worth $1.7bn with China and $5bn with Qatar.
A Japanese government official said Tokyo has no plan for now beyond monitoring the lira, but added the Group of Seven (G7) countries or the International Monetary Fund would rescue Turkey “if it morphs into a real crisis”.
Any significant weakening of the lira beyond 7 per dollar, where it has stabilised, could erode support for Erdogan, whose party lost local elections last year on the heels of the 2018 crisis that sent inflation and unemployment soaring.
His government has imposed tighter limits on local bank FX trading and opened investigations into global firms UBS, Citigroup and BNP Paribas.
Investors and bankers say it would need to act quickly to restore confidence if companies begin missing foreign debt payments or Turks start withdrawing deposits.
They say rate hikes are one avenue, followed by IMF funding – an option both Erdogan and Albayrak have dismissed.
“This feels like a rerun of the last lira crisis,” said Win Thin, global head of currency strategy at Brown Brothers Harriman. “Surprisingly little has changed fundamentally in the nearly two years that have passed (except policies) that make it even harder to invest in Turkey.”
Some investors and bankers said only in a worst-case scenario would Turkey adopt capital controls, such as limits on transfers or withdrawals, which would harm its market credibility.
Continue Reading…