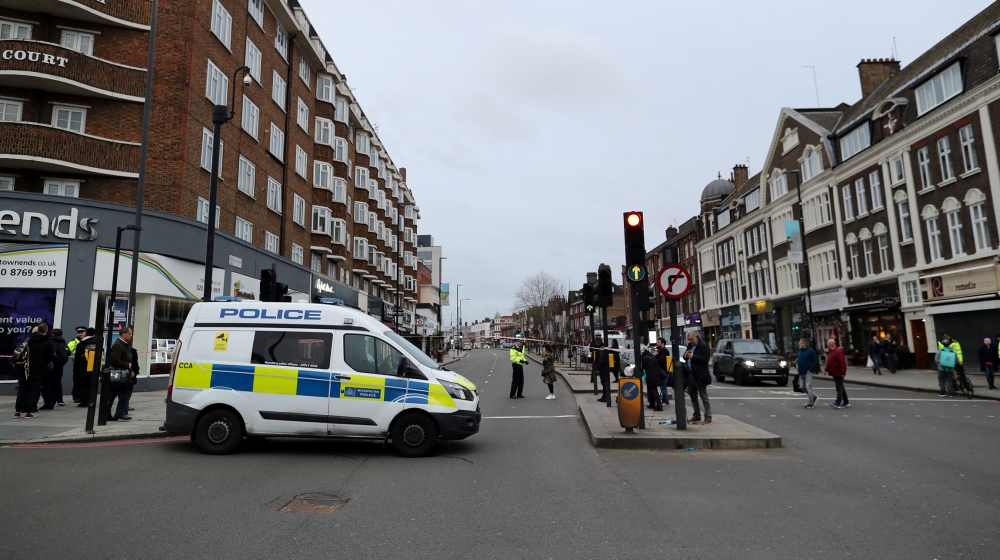 Police have shot dead a man wearing a “hoax” explosive device after a stabbing attack in south London that left three people wounded and was described by police as a “terrorism-related incident”.
The London ambulance service said three people had been taken to hospital after the attack on Sunday in Streatham, a residential district south of the River Thames.
Police said one of the wounded was in a life-threatening condition and that the scene of the incident was fully contained.
“A device was found strapped to the body of the suspect and specialist officers attended. Cordons were put in place and it was quickly established that this was a hoax device,” said Lucy D’Orsi, deputy assistant commissioner in the Metropolitan Police.
Some witnesses said the attacker had been armed with a machete and one described him as wearing silver canisters on his chest.
One witness, who asked not to be identified, told the UK’s Press Association news agency that he saw the dramatic events unfold.
“I saw a man with a machete and silver canisters on his chest being chased by what I assume was an undercover police officer – as they were in civilian clothing,” he said.
“The man was then shot. I think I heard three gunshots but I can’t quite remember.”
Karker Tahir said he was at work when he saw police chasing a man down Streatham High Road, the area’s main shopping district.
“They kept telling him, ‘Stop! Stop!'” Tahir said. “But he didn’t stop, and then I saw that they shot him three times. It was horrible seeing it. The man was on the floor and it looked like he had something, which police said may be a device.”
Reporting from the scene, Al Jazeera’s Catherine Stancl said the area remained cordoned off on Sunday evening.
“Witnesses say they saw a man carrying a large knife running away and police dressed in civilian clothing managed to chase him and he was shot dead. The response was incredibly quick,” she said.
“People here are in a lot of shock. They can’t believe this happened on their doorstep.”
Officers responded quickly to the stabbings because of a “proactive counter-terrorism operation” that was underway, police said.
Prime Minister Boris Johnson thanked the emergency services for their response. “My thoughts are with the injured and all those affected,” he said.
London’s mayor, Sadiq Khan, said in a statement after Sunday’s incident: “Terrorists seek to divide us and to destroy our way of life – here in London, we will never let them succeed.”
The last such incident in London took place in November, when police shot dead a man wearing a fake explosive vest who stabbed two people to death and wounded three more before being wrestled to the ground by bystanders. Authorities had called it a “terrorist attack”.
Continue Reading…