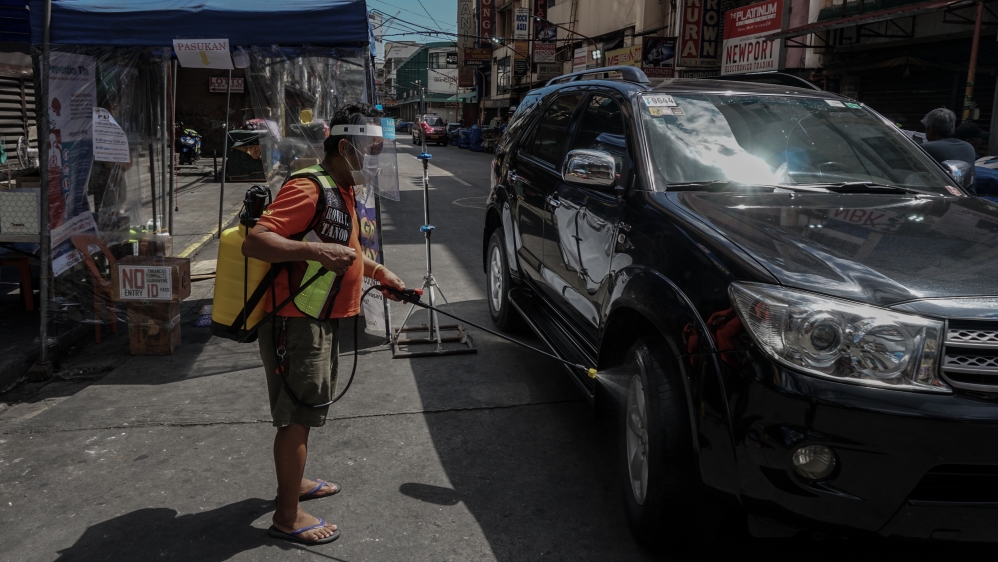 A 63-year-old man was shot dead in the Philippines after threatening village officials and police with a scythe at a coronavirus checkpoint, police said on Saturday.
The man is believed to have been drunk when he threatened village officials and police manning the checkpoint in the town of Nasipit in the southern province of Agusan del Norte on Thursday, a police report said.
More:

Duterte presses on with ‘drug war’ despite coronavirus lockdown

“The suspect was cautioned by a village health worker … for not wearing a face mask,” the report said. “But the suspect got angry, uttering provoking words and eventually attacked the personnel using a scythe.”
The suspect was shot dead by a police officer who was trying to pacify him.
The incident is the first reported case of police shooting a civilian for refusing to follow restrictions to curb the spread of the novel coronavirus.
Duterte’s warning
President Rodrigo Duterte had warned on Wednesday he would order the police and the military to shoot anyone who created trouble.
“Follow the government at this time because it is critical that we have order,” he said in a late-night televised national address.
“And do not harm the health workers, the doctors … because that is a serious crime. My orders to the police and the military, if anyone creates trouble, and their lives are in danger: shoot them dead.”
The Philippines’s main island of Luzon has been under a month-long lockdown since March 16, prohibiting people from leaving their homes except for essential trips to the grocery or the pharmacy, or if they are front-line workers.
Many provinces outside of Luzon have also imposed their own restrictions in a bid to prevent the virus from spreading.
The department of health reported 76 new confirmed cases of infection in the Philippines, bringing to 3,094 the total tally in the country.
Eight additional deaths were also recorded, pushing the death toll to 144, while 57 patients have recovered.
Duterte defended his warning against troublemakers in another late-night televised address on Friday, saying the public needed to realise the gravity of the situation because anyone can get sick of the disease.
“Without these restrictions, this will not end,” he said. “So if you don’t want to follow, then I will finish you to protect the lives of the innocent who don’t want to die.”
‘Attacking freedoms’
Amnesty International lamented the fact that strongmen leaders around the world like Duterte have been using the COVID-19 pandemic “to further stifle criticism and dissent”.
“This is an unprecedented health crisis, but President Duterte is focusing on attacking freedoms of speech and assembly,” said Butch Olano, a director for Amnesty International in the Philippines.
“He is downplaying the nation’s plea for better services when the priority should be to fulfil the government’s obligation to provide healthcare and vital relief to all persons without discrimination,” he added.
The government has begun to distribute cash assistance to poor families and workers affected by the lockdown under a 200 billion peso ($4bn) amelioration package.
But there have been persistent complaints of delays in the delivery of assistance, especially food packs.
On Wednesday, a commotion broke out in a Manila suburb when a group of slum residents gathered outside their shanty homes after hearing rumours that donations would be distributed.
Village security officers and police urged the residents to go back to their homes, but they refused.
Twenty-one of the residents were arrested and various criminal charges have been filed against them.
Continue Reading…

Taliban warn US peace deal in Afghanistan near breaking point