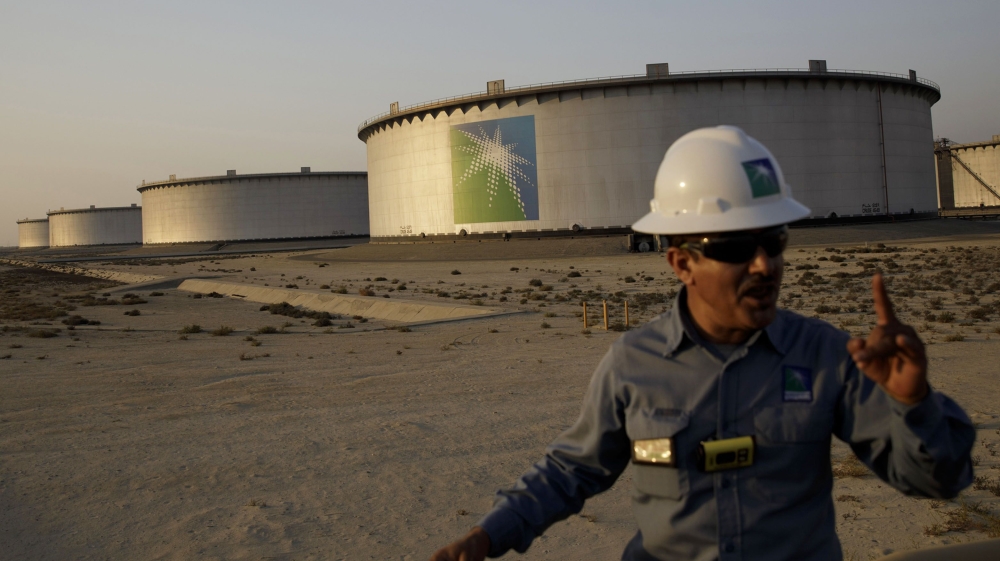 Gulf stock markets fell on Tuesday, and the Saudi riyal dropped in the forwards market after US crude oil futures collapsed below $0 on a coronavirus-induced supply glut.
The Saudi stock index dropped 1.5 percent at market open with oil company Aramco down 1.7 percent, and shares in the Dubai market fell 1.4 percent, while the Abu Dhabi index lost 0.5 percent and the Kuwaiti premier index declined 2 percent.
More:

Is a government bailout of US shale oil still in the cards?

The cost of insuring against a potential debt default of Saudi Arabia – the world’s biggest oil exporter – increased slightly to 168 basis points from 166 on Monday, according to data from IHS Markit.
US crude oil futures fell below $0 on Monday for the first time in history as demand cratered. Brent crude, the international benchmark, also slumped below $20 a barrel for the first time in 18 years.
Lower oil prices, combined with other economic pressures caused by the coronavirus outbreak, are hurting the budgets of Gulf countries that rely heavily on crude exports, and have strained their currencies.
All the Gulf states depend on oil income for most of their public revenues.

The International Monetary Fund last week projected the six Gulf states along with oil exporters in the Middle East and North Africa will lose more about $230bn in oil revenues after oil prices dropped by more than 60 percent this year.
The global lender also forecast that economies of the Gulf states will shrink by 2.7 percent, their worst performance in several decades.
Low and very volatile
The oil price will stay low for some time as supply exceeds demand and the current situation on global oil markets is reminiscent of the 1980s oil glut, former BP boss John Browne said on Tuesday.
Browne, who ran BP from 1995 to 2007, said the negative prices were a US issue because of a lack of storage, though he said across the world demand was down while production was still high.
“The prices will be very low, and I think they will remain low and very volatile for some considerable time,” Browne told the BBC. “There is still a lot of oil being produced that is going into storage and not being used.
“This is very reminiscent of a time in the mid-1980s when exactly the same situation happened – too much supply, too little demand and prices of oil stayed low for 17 years.”
The 1980s glut – when oil prices tumbled in the mid-1980s – ultimately led to geopolitical tremors across the world: The Soviet Union collapsed in 1991 while Algeria faced a political crisis that spawned a deadly civil war.
Browne said the demand for hydrocarbons would likely fall, partly as a result of a greater awareness of climate change.
“Demand for hydrocarbons will continue to be weak,” he said. “And that demand will be filled primarily by those who have no choice but to produce oil – so the state oil companies of the world.”
US President Donald Trump said his administration would look at a proposal to block Saudi Arabian oil shipments to the US to help buoy the US shale oil industry against an unprecedented rout that threatens its survival.
“Well, I’ll look at it,” Trump told reporters at a daily news conference after he was asked about requests by some Republican legislators to block the shipments under his executive authority.
Continue Reading…

Nowhere to go: US oil prices fall back below zero, stocks fall

Pakistan records highest number of coronavirus deaths in a day

Markets head for worst week since 2008 as coronavirus cases surge

Global share markets were headed for the worst week since the depths of the 2008 financial crisis as investors ditched risky assets on fears the coronavirus would become a pandemic and derail economic growth. Asian stocks tracked another overnight plunge in Wall Street’s benchmarks on Friday with the markets in China, Japan and South Korea… 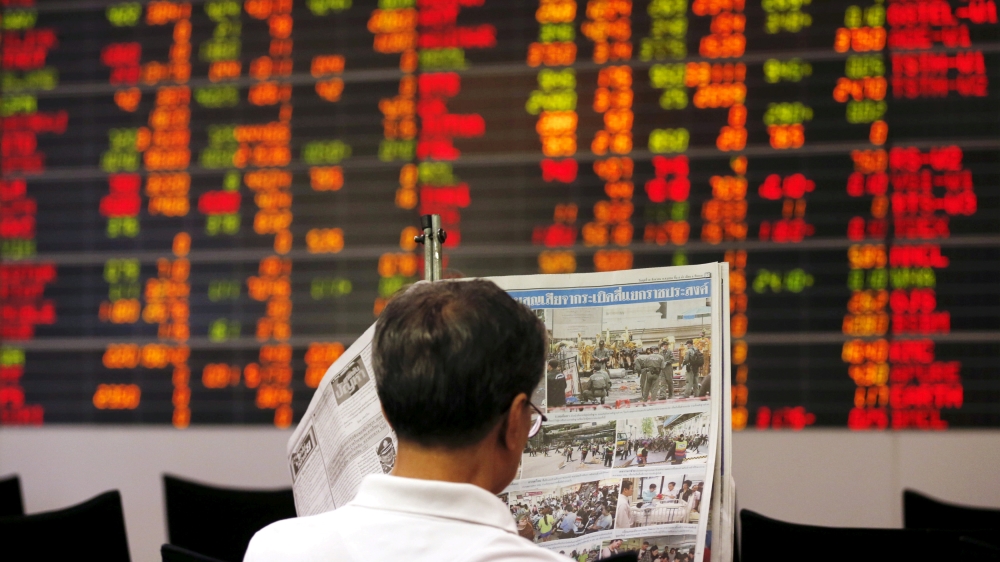 Global share markets were headed for the worst week since the depths of the 2008 financial crisis as investors ditched risky assets on fears the coronavirus would become a pandemic and derail economic growth.
Asian stocks tracked another overnight plunge in Wall Street’s benchmarks on Friday with the markets in China, Japan and South Korea all posting heavy losses.
More:

‘Too soon to tell’: Coronavirus could take big toll on US economy

Hopes that the epidemic that started in China would be over in a few months and economic activity would return to normal have been shattered, as new infections reported around the world now surpass those in China.
The worsening global threat from the virus prompted investors to rapidly step up bets the United States Federal Reserve would need to cut interest rates as soon as next month to support economic growth.
“We don’t even need to wait for economic data to see how badly the economy is being hit. You can tell that the sales of airlines and hotels are already falling by a half or something like that,” said Tomoaki Shishido, senior economist at Nomura Securities.
“It is fair to say the impact of the coronavirus will be clearly much bigger than the US-China trade war. So the Fed does not have a reason to take a wait-and-see stance next month,” he said.
The MSCI All Country World Index fell 0.3 percent after a 3.3 percent drop on Thursday. So far this week it has lost 9.2 percent, on course for its biggest weekly decline since a 9.8 percent plunge in November 2008.
Wall Street shares led the rout as the S&P 500 fell 4.42 percent, its largest percentage drop since August 2011.
It has lost 12 percent since hitting a record close on February 19, marking its fastest correction ever in just six trading days while the Dow Jones Industrial Average fell 1,190.95 points, its biggest points drop ever.
The CBOE Volatility Index, often called the “fear index”, jumped to 39.16 on Thursday, the highest level in about two years, well out of the 11-20 range of recent months.
The index, which measures expected swings in US shares in the next 30 days, often shoots up to about 50 as bear market selling hits its heaviest although it approached 90 during the 2008-09 financial crisis.
In Asia, MSCI’s regional index excluding Japan shed 1.4 percent. Japan’s Nikkei gave up 3.3 percent on rising fears the Olympics planned in July-August may be called off due to the coronavirus.
Australian shares dropped 2.8 percent to a six-month low while South Korean shares shed 2.1 percent.
“The coronavirus now looks like a pandemic. Markets can cope even if there is big risk as long as we can see the end of the tunnel,” said Norihiro Fujito, chief investment strategist at Mitsubishi UFJ Morgan Stanley Securities. “But at the moment, no one can tell how long this will last and how severe it will get.”
World Health Organization Director-General Tedros Adhanom Ghebreyesus said the virus could become a pandemic as the outbreak spreads to the largest developed economies such as Germany and France.
The global rout knocked mainland Chinese shares lower, which have been relatively well supported this month, as new coronavirus cases in the country fell and Beijing doled out measures to shore up economic growth.
The CSI300 index of Shanghai and Shenzhen shares dropped 2.4 percent, on track to post its first weekly loss in three.
Fears of a significant economic slump sent oil prices to their lowest level in more than a year.
US crude futures fell 1.6 percent to $46.35 per barrel, having lost 13.2 percent so far on the week, which would be the deepest fall in more than five years.
As investors flocked to the safety of high-grade bonds, US yields plunged with the benchmark 10-year notes yield hitting a record low of 1.241 percent. It last stood at 1.274 percent.
That is well below the three-month bill yield of 1.439 percent , deepening the so-called inversion of the yield curve. Historically an inverted yield curve is one of the most reliable leading indicators of a US recession.
Expectations the Fed will cut interest rates to cushion the blow are rising in money markets. Analysts say Fed funds futures are now pricing in more than a 50 percent chance of a 25 basis point cut at the central bank’s March 17-18 meeting.
As investors rushed to safe assets, gold stood at $1,646.4, near the seven-year high of $1,688.9 hit earlier this month.
In currency markets, the yen rose to a three-week high of 109.33 to the US dollar and last stood at 109.40.
The euro stood at $1.0993, having jumped over 1 percent in the previous session, the biggest gain in more than two years as investors wound back bets against the currency versus the US dollar.
Continue Reading…