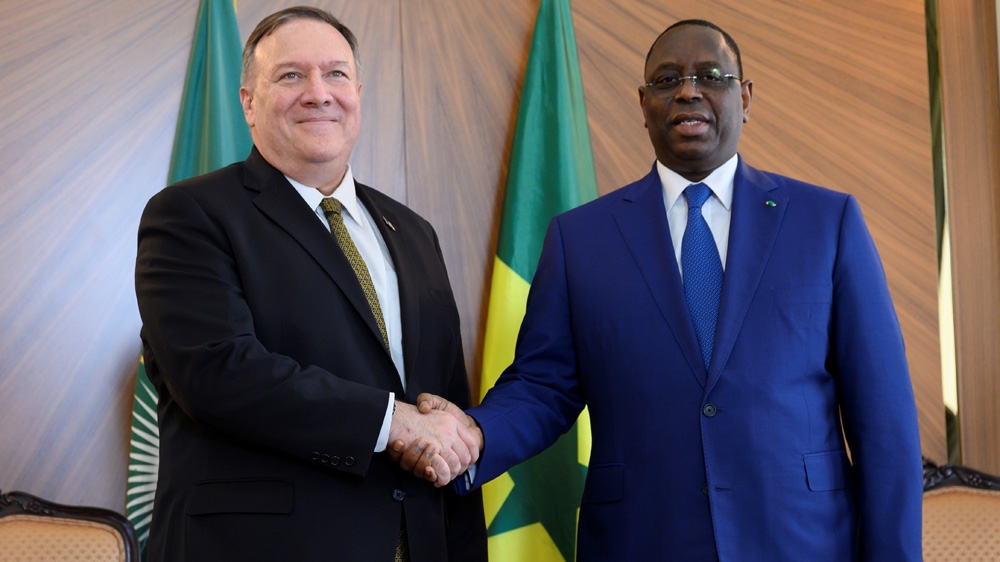 The United States’s top diplomat has arrived in Senegal at the start of a whistle-stop tour of three African countries, with analysts viewing it as a bid to counter Chinese influence in Africa at a time of growing confusion over Washington’s strategy on the continent.
On his first official trip to a sub-Saharan African country since taking office almost two years ago, US Secretary of State Mike Pompeo will also visit Angola and Ethiopia.
More:

Pompeo has already warned of what he called China’s “dangerous influence” on the African continent, saying in January that Chinese investment feeds corruption and undermines the rule of law, and presenting the US as an alternative.
Joseph Ochieno, a political analyst, called Pompeo’s comments “almost hypocritical”.
“I don’t think the US can tell Africa that American companies are necessarily the cleaner ones when it comes to the continent,” he told Al Jazeera, alluding to past corruption and patronage scandals involving US companies in Africa.

How big a role does China play across the African continent?

Beijing surpassed Washington as Africa’s largest trading partner more than a decade ago, forming a relationship worth about $204bn in trade, according to China’s Ministry of Commerce.
Several African states have also signed on to China’s Belt and Road Initiative, which has seen Beijing finance power plants, roads and other infrastructure projects across the continent.
As a result of the billions of dollars in loans provided by China towards such projects, the country has become Africa’s largest debt holder.
“The US is realising that they were playing games with Africa but China came in – and came in fairly big with minimum, if any, conditions,” Ochieno said.
“Africa is up for grabs, unfortunately”.
‘Mixed messages’
Pompeo’s visit comes at a tense moment, with Washington mulling military cuts in the restive Sahel region and imposing travel bans on four more African countries, bringing the total to six.
A perceived disinterest by President Donald Trump, who has yet to visit Africa and has described the continent in derogatory terms, has not improved the situation, worsened by travel bans recently imposed on four more African countries, bringing the total to six.
Al Jazeera’s Nicolas Haque, reporting from the Senegalese capital said the US was “sending mixed signals” in encouraging trade and investment with African nations, while also expanding the travel ban and considering a potential reduction in US military presence.
Countries in West Africa’s Sahel region are struggling to protect their citizens against armed groups linked to al-Qaeda and ISIL, who have killed hundreds of civilians in the past year.

Some have questioned whether the US’s commitment to restoring stability in the region is waning as the Pentagon announced this week that it will start adjusting its military presence in Africa as it considers cuts, with resources instead expected to go to countering China, Russia and Iran.
This month, however, the US military will hold its annual Flintlock exercises in Senegal and neighbouring Mauritania to help train regional armies to counter armed groups.
One former US diplomat expressed confusion over the goals of Pompeo’s trip.”It’s not clear why he is going now and whether this is part of any broader US strategy on Africa, especially when the administration has indicated in just the last few weeks that it intends to exponentially reduce its security and aid investments,” the former diplomat, who requested anonymity to speak candidly, was quoted as saying by AFP news agency.”You can’t just check the box of having an Africa policy by stopping in a few countries on a big continent and then call that a strategy.”
Pompeo meets Senegal’s leaders
Following talks with Senegalese leaders on Sunday, Pompeo said the US would work closely with regional forces and European countries in the fight against armed groups in West Africa, adding that he had no specific announcement to make about any cuts in US troops.
“When our review is done we’ll have a conversation with not just Senegal but all the countries in the region, we’ll talk through why we’re doing what we’re doing and we’ll deliver an outcome that works for all of us.”
Senegalese Foreign Minister Amadou Ba said Washington had informed Dakar of its “wish to withdraw combat troops”. This, he said, would still leave a US military presence, notably in the areas of training and intelligence.
But Ba also insisted that the US remained a key ally in the fight against armed groups in the Sahel.
“More than ever, Africa is faced with major challenges linked to insecurity and terrorism,” Ba said. “It needs the United States of America as a strategic ally for a definitive return to peace and stability.”
After Senegal, Pompeo will stop in Angola, an oil-rich but largely impoverished country where President Joao Lourenco has pledged to combat corruption, including actions against close relatives of the former leader.
Pompeo then heads to Ethiopia, a key US ally in the Horn of Africa, which has undergone dramatic political reforms since Nobel peace prize-winning Prime Minister Abiy Ahmed took office in 2018.
Continue Reading…