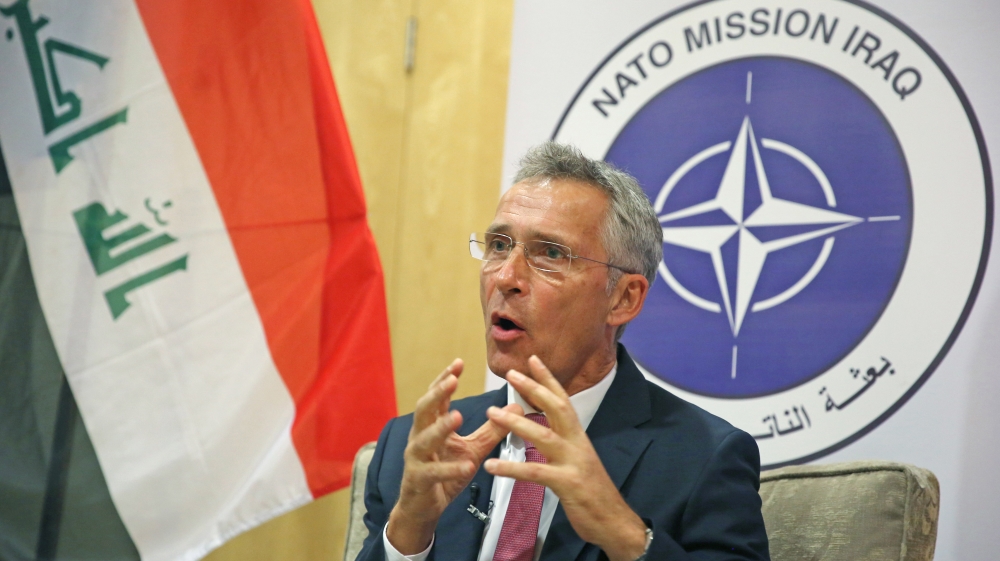 NATO has a roughly 500-strong training mission in Iraq, but it has been suspended since the US attack killing Iranian commander Qassem Soleimani in Baghdad [File: Ahmad Al-Rubaye/AFP]
NATO chief Jens Stoltenberg spoke with US President Donald Trump on Wednesday and agreed that the Western allies should take a more prominent role in the Middle East.
“The President asked the secretary general for NATO to become more involved in the Middle East,” a NATO statement said, after the call between Washington and Brussels.
More:
Trump: US imposing new ‘powerful’ sanctions on Iran after strikes

World reacts after Iran fires missiles at US targets in Iraq

Iran fires back at US: What you need to know in 500 words

“They agreed that NATO could contribute more to regional stability and the fight against international terrorism.”
Earlier on Wednesday, in a statement about Iranian missile strikes on US bases in Iraq, Trump had said: “Today, I am going to ask NATO to become much more involved in the Middle East process.”
The 70-year-old Atlantic alliance boasts that it is the most successful in history, and was the linchpin of Western European security throughout the Cold War.
But its role, and indeed its founding treaty, has been focused on Europe and North America, despite the challenges facing the allied militaries in Asia, North Africa and the Near East.
NATO has a roughly 500-strong training mission in Iraq, but it has been suspended since Friday’s US attack killing Iranian commander Qassem Soleimani in Baghdad.
Some of the allied troops attached to the mission have been withdrawn from Iraq for their safety, but Stoltenberg has described this as a temporary measure.
Trump has often criticised Washington’s European allies for not pulling their weight, as he sees it, within the alliance, but Stoltenberg has said they are ready.
The NATO statement did not go into detail as to what more the allies could do in Iraq and the crisis with Iran, but the leaders “agreed to stay in close contact on the issue.”
“NATO plays a key role in the fight against international terrorism,” it said, citing training missions in Iraq and Afghanistan and the coalition against ISIL (ISIS).