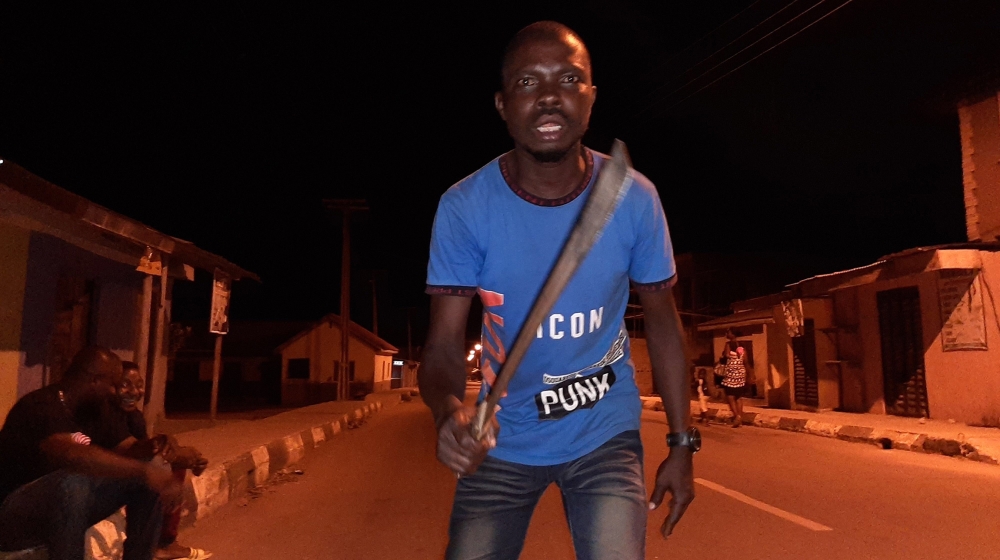 Two weeks ago, when Nigeria’s government ordered an impending lockdown of the three key states of Lagos, Ogun and Abuja to mitigate the spread of the coronavirus, residents were advised to stay at home and observe the quarantine.
The announcement prompted Wasiu Kolawole to go on a last-minute shopping spree to stock up on food for the next 14 days, as well as buy petrol for a generator to power his home in Lagos.
More:

Nigeria COVID-19 survivor: ‘An experience I don’t wish on anyone’

The 54-year-old, a commercial bus driver, was looking forward to spending some quality time with his four children. Most days, he leaves his house in Lagos’s Iju-Ishaga area before they wake up and sometimes returns home after they have already gone to bed.
Four days into the lockdown, however, this downtime with his family was interrupted when a criminal gang stormed a nearby street to rob residents of their belongings.
“I woke up around 1am and I heard some neighbours screaming and calling for people to come out and defend them. It was like a movie scene. I made my way to the entrance of the house and found out that other neighbours were all out with weapons [such as machetes and clubs],” Kolawole told Al Jazeera.
“I quickly ran back into the house to fetch my machete and joined other residents to form a barricade to prevent the hoodlums from invading our street. We stayed awake until 7am before dispersing to our homes.”
The quick mobilisation resulted in Kolawole and his immediate neighbours not coming under attack – unlike residents of two nearby streets. Armed with clubs, machetes and iron rod, the robbers ransacked homes, carted away valuables and injured some residents who put up a fight.
That was not the first time the community was targeted by criminal gangs. Kolawole acquired his machete, which he keeps close to his bedside, after being robbed in 2018.

With similar attacks also taking place in other areas of Lagos during the lockdown, some residents have now formed vigilante groups to keep guard against possible neighbourhood looters.
Residents in Alagbado, a Lagos suburb, said they had also taken on the responsibility of defending their homes following an attack by a group of bandits.
“My decision to join the vigilante is to protect my home because … the government is not doing their job,” Awosusi Ahmed, a resident, told Al Jazeera.
“I would have been in my own abode, sleeping, with the confidence that the police is doing their job. But since I’ve not received any help from the police, and I’m not expecting any help from them as well, so I have to be strong,” he said.
Such incidents are not restricted to Lagos, Nigeria’s commercial capital, as some communities in neighbouring Ogun state have also reported similar attacks.
On Monday, the police said they were bolstering forces in Lagos and Ogun “in the wake of recent activities of hoodlums and street urchins in the border communities” and announced the arrest of some 200 suspects.
‘It is a matter of life and death’
There are currently 343 confirmed cases of coronavirus in Nigeria, including 11 deaths. Lagos is the epicentre of the pandemic in the country.
The government was expected to lift the lockdown on Monday, but President Muhammadu Buhari announced a 14-day extension during a televised address.
“It is a matter of life and death,” Buhari said of the nation’s response to the coronavirus pandemic. “The repercussions of any premature end to the lockdown action are unimaginable.”
There have been mixed reactions to the announcement as some residents were looking forward to returning to work and earning a living.
“I don’t think this lockdown can work because there was no provision for the people,” Adedayo Olamide, 43, told Al Jazeera.
“No salary, no nothing. When the groceries we have at home is finished, what do we do? What’s the next thing?”

Nigerian President Muhammadu Buhari announced a 14-day extension of the lockdown in Lagos, Ogun and Abuja during a televised address [Reuters]

Nigeria is Africa’s most populous nation with a population of more than 200 million. Some 20 million reside in the megacity of Lagos, the majority of whom work in the informal sector.
The extension of the lockdown is expected to add to the hardship of millions of Nigerians living hand-to-mouth, often on less than one dollar a day.
Starting on April 1, the Humanitarian Affairs Ministry began paying 20,000 naira ($52) to families in the national social register of poor and vulnerable households.
Buhari has also ordered that “the current social register be expanded from 2.6 million households to 3.6 million households in the next two weeks. This means we will support an additional one million homes with our social investment programmes.”
But residents complained that the interventions do not go far enough.
“The government’s failure to disclose key details of the cash transfer program has also cast doubt on how many people it includes and who will benefit,” Human Rights Watch, a US-based NGO, said in a statement.
“Millions of Nigerians observing the COVID-19 lockdown lack the food and income that their families need to survive,” Anietie Ewang, the group’s Nigeria researcher, said.
On April 6, Finance Minister Zainab Ahmed said oil-rich Nigeria had requested $6.9bn from international lenders to mitigate the impact of the coronavirus pandemic. Already, Africa’s most populous country has seen its revenues slump following a drop in oil prices.
Continue Reading…