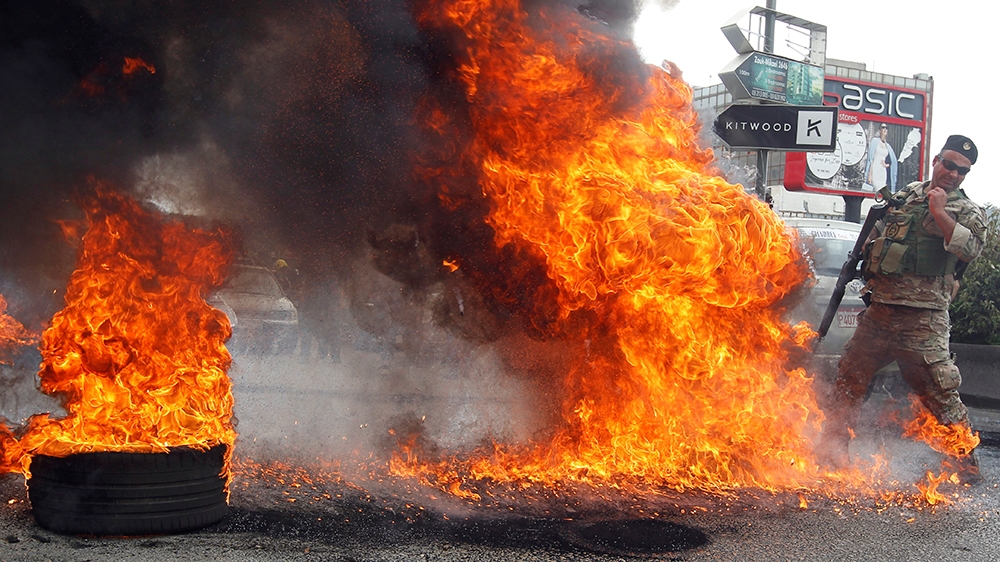 Beirut, Lebanon – One man died on Tuesday after violent clashes in Lebanon’s northern city of Tripoli that left dozens injured after the Lebanese army used live fire, rubber-coated rounds, and tear gas to clear angry protesters.
Thousands of protesters across Lebanon blocked roads, attacked banks, and marched through streets throughout Monday in response to the local currency’s rapid devaluation, which has led millions to lose more than half the value of their salaries and savings.
More:

Lebanon’s protests are far from over

A 26-year-old man’s sister, Fatima Fouad, said in a Facebook post that her brother, Fouaz Fouad al-Seman, died as a result of live gunfire by Lebanese soldiers.
An army source confirmed to Al Jazeera that troops used live fire, but said they shot in the air, not at protesters. The source also confirmed a man died, but said it was unclear how, adding rubber-coated bullets and tear gas were used on demonstrators.
Lebanon is suffering its worst-ever financial crisis that has led to a dollar shortage, which in turn has seen the Lebanese pound tumble by more than 50 percent in the last six months.
Unprecedented anti-establishment protests that began last October had mostly disappeared as the country went into lockdown over the COVID-19 pandemic, but dire living conditions brought people back to the streets in at least two-dozen locations since Sunday.

Northern Tripoli, Lebanon’s second-largest and poorest city, saw the largest protests on Monday with hundreds of demonstrators taking to the streets. The situation quickly turned into riots as banks were vandalised and set alight.
Lebanon’s army said 54 soldiers were among the wounded during attempts to open roads and quell riots across the country. Forty troops were injured in incidents in Tripoli.
“The army leadership, while reaffirming its respect for the right of citizens to express their opinions, warns of some attempts to exploit demonstrations to carry out actions that affect security and stability,” a statement said, adding the army “will never tolerate any violation of security”.
The Lebanese army said two soldiers were injured when a grenade was thrown at an army patrol, while an army vehicle was torched using Molotov cocktails in the middle of Tripoli’s Al-Nour square, the heart of anti-establishment protests that broke out in October of last year.
Molotov cocktails have been thrown at at least five banks since the weekend, including in the capital Beirut.
Banks have for six months been limiting withdrawals of the local currency and have entirely phased out withdrawals in foreign currencies that were previously standard.

‘We’re coming for you’
Video from Monday night showed protesters raining down a hail of rocks on soldiers in Tripoli, while the sound of heavy gunfire can be heard. Protesters also took to the streets in southern Sidon, chanting “Molotov, Molotov, instead of a candle, Molotov,” outside a local branch of the Central Bank.
Lebanon’s protests began as a largely peaceful uprising last year, when hundreds of thousands took to the streets to demand political change and an end to endemic corruption that sapped the state’s resources. But over the last few months, they have become more desperate as people struggle to make ends meet and secure basic needs, including food.
Human Rights Watch has warned millions could go hungry unless the government puts forward a robust social-safety net. But when the cabinet sought to get approval for a large spending bill at a parliament session earlier this month, quorum was lost and the decision postponed.
“This is a letter to each corrupt politician,” a protester in Tripoli said to his camera Monday night. “When we the Lebanese people get hungry, we’re going to remove you one by one… We’re coming for you one by one.”
Continue Reading…

Haftar dismisses UN Libya unity deal as ‘thing of the past’ 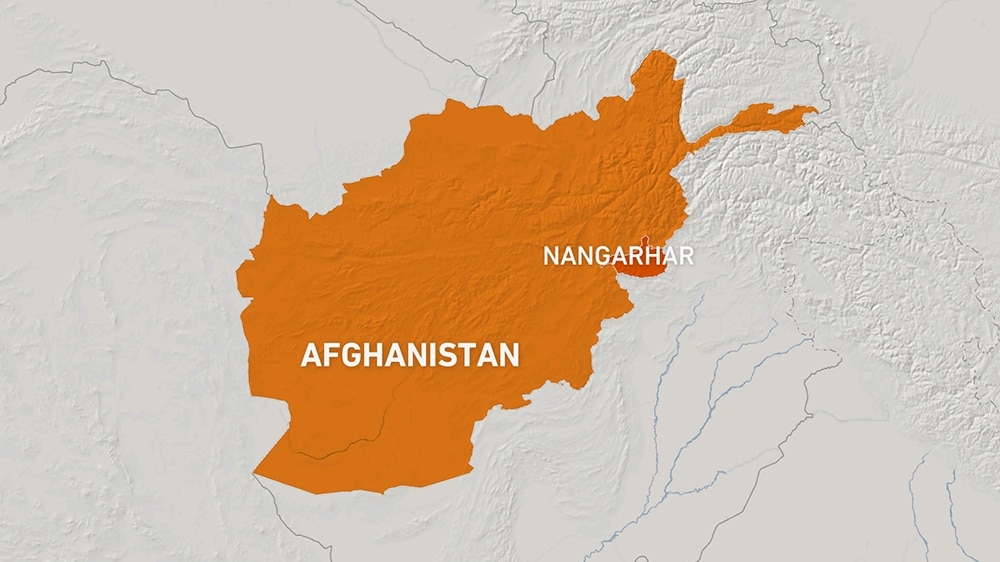 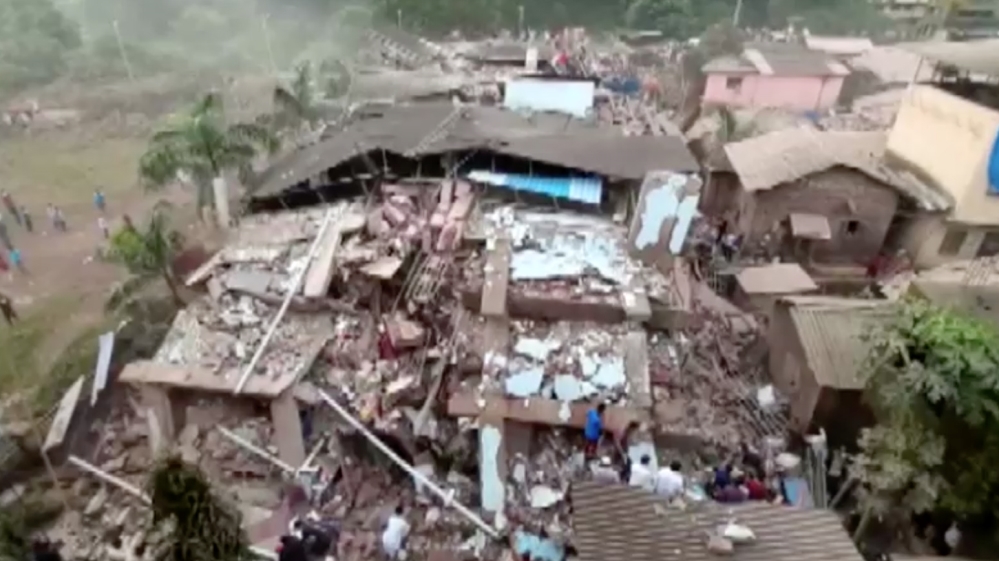 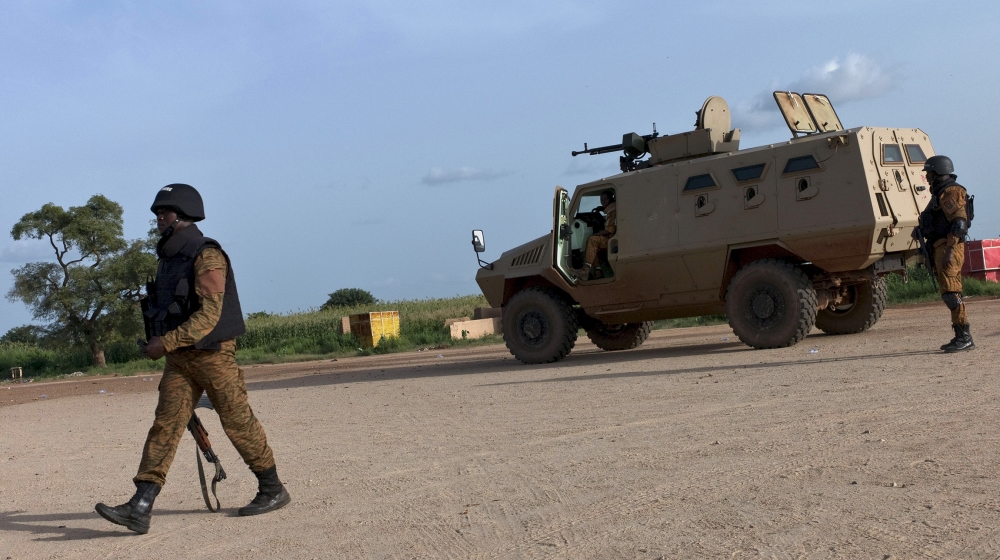