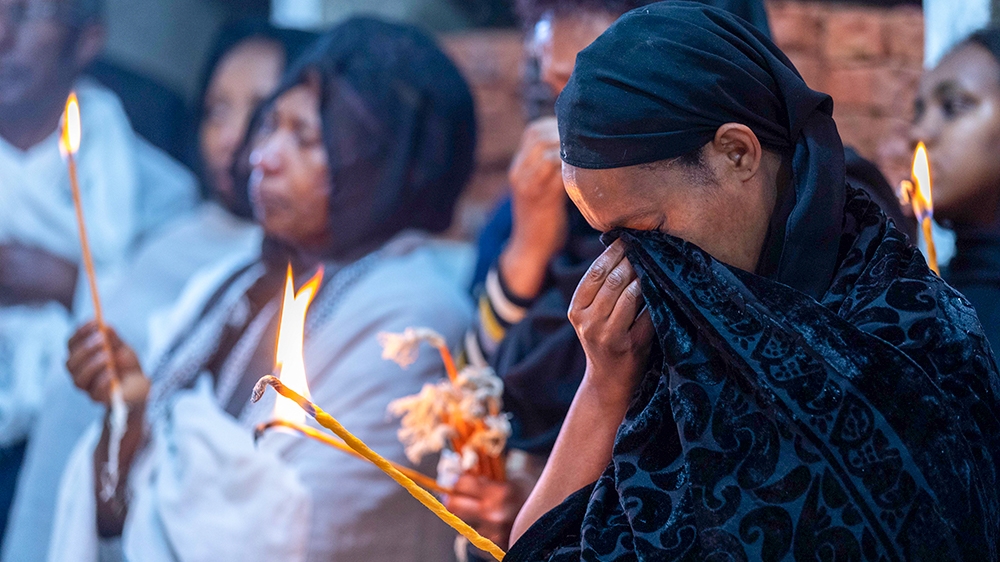 Adadi, Ethiopia – Benyam Alemayehu, an Ethiopian Airlines pilot, knew straight away something was not right.
Waking up after a post-flight rest, he found more than a dozen missed calls on his phone.
“I switched on the TV [and the] ET302 crash was all over the news,” he says, recalling the Ethiopian Airlines disaster a year ago that killed all 157 people on board a new Boeing 737 MAX 8.
Benyam’s worry quickly reached new heights; he found out that his close friend, 29-year-old Yared Getachew, was the one flying the passenger jet.
“My heart was beating real fast, and I was shivering. After hearing Yared was the pilot of the doomed plane, I cried out loud, and I had nightmares in the days after the crash,” Benyam told Al Jazeera.

Nairobi-bound Flight ET302 plunged to the ground at 8:38am (05:38 GMT) on March 10, 2019, six minutes after taking off from Addis Ababa’s Bole International Airport.
All 149 passengers – from 33 countries – and eight crew members were killed.
The tragedy plunged people across Ethiopia into mourning, including in Adadi, a small sleepy village in central Ethiopia where the plane crashed and burst into flames.
“I was drinking coffee when I heard a sudden high-pitched noise,” remembers Abera Lenijso, a 62-year-old local farmer.
“When I went out of my home, I saw a huge explosion and an enveloping smoke which reached even my house,” he says.
“We ran to the crash site in distress, with many of us crying. Then we called our local administrators.”
In the immediate aftermath of the crash, mourners, government officials and journalists poured into Adadi.
“Our village was little-known before the plane crash,” Abera says. “In the following days after the plane crash, mourners came to our area. We greeted the mourners with food and shared their grief.”

The crash traumatised more than those who lost loved ones – it left Ethiopian Airlines in a state of shock.
“The plane crash has taken a very long toll on the airline, on all of us – it has consumed a lot of energy and was very shocking,” Tewolde Gebremariam, the company’s chief executive officer, told an African aviation conference in Addis Ababa earlier this month.
“But we were very strong, and even on the day of the accident we managed to fly all flights without delay and no cancellation at all,” Tewolde said, citing the decades-long experience of the continent’s largest airline by profit and revenue.
Crash report
Involving the same kind of Boeing aircraft as a 2018 Lion Air crash in Indonesia that killed 189 people on board, the ET302 plane crash had a significant effect on the US planemaker.
It led to the global grounding of the popular single-aisle jet and Boeing recording billions of dollars in losses.
Both incidents saw uncontrolled drops in the jets’ nose before the crashes, blamed by investigators on the model’s anti-stall flight system – the Maneuvering Characteristics Augmentation System (MCAS).
An interim report released by the Ethiopian government on Monday said erroneous sensor readings activated the MCAS anti-stall system, which pushed the jet towards the ground.
“The report supports the initial findings by Ethiopian officials last April that Boeing’s … MCAS made it impossible for crew to regain control of the aircraft,” Ethiopia’s FANA news agency said.
At the aviation conference, Tewolde acknowledged that it will be some time before Ethiopian Airlines’s four remaining 737 MAX aircraft take to the skies again.
“We have not made a decision on 737 MAX 8 planes, and that decision is not easy for us right now,” he said.
“At this moment, we’re waiting for the final decisions on the aeroplanes, and we have to be convinced beyond a reasonable doubt that this aeroplane is good to fly [again].”
While some speculated that Ethiopian Airlines would switch to other planemakers in the wake of the crash, Tewolde dismissed such a scenario, underlining that his company’s strong partnership with Boeing stretches for more than 70 years.
“The relationship with Boeing has always been good,” he said. “Both of us have discussed and agreed the relationship should continue.”
Kaleyesus Bekele, an Ethiopian aviation journalist, said Ethiopian Airlines is unlikely to substantially change its partnership with Boeing because of last year’s plane crash.
“Ethiopian Airlines staff, from technicians to pilots, are used to Boeing aeroplanes,” he told Al Jazeera.
“While revelations about the faulty nature of MACS … has cast serious doubts on MAX 8 planes’ reliability, the overall relationship with Ethiopian Airlines will continue to strengthen.”
While bereaved families and friends of the victims of the ET302 crash still wait for answers, with many filing lawsuits against Boeing, Benyam is still trying to cope with the loss of his close friend Yared.
“He was my best friend, my best man on my wedding,” Benyam says. “Captain Yared was a sociable, caring and extrovert individual.”
Continue Reading…

Turkey hopes for new refugee deal with EU before March 26