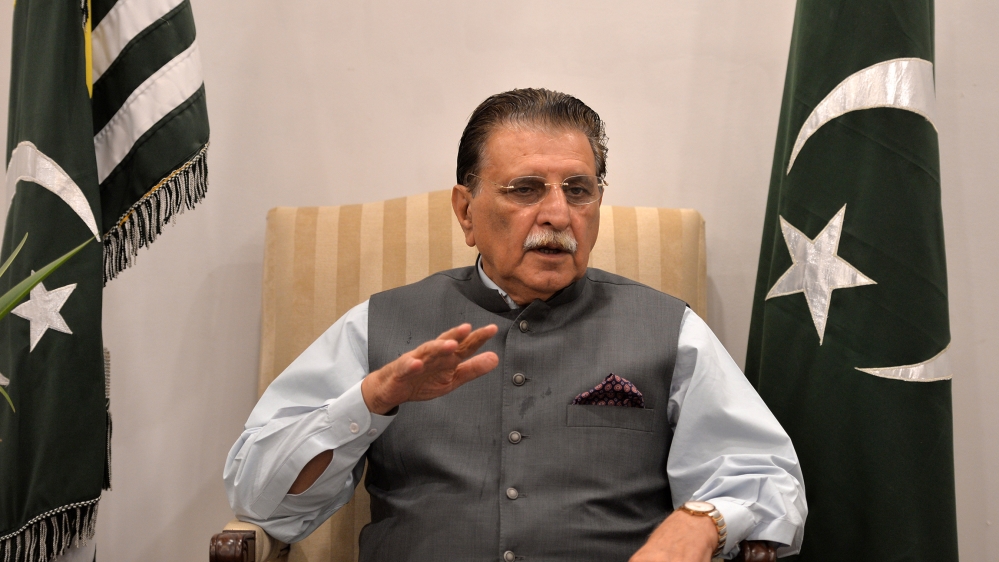 Kashmir students attend school for the first time in 7 months

“The government of Pakistan needs to take some daring steps,” he said in the capital Muzaffarabad. “They have to give India a fundamental punch in [Indian-administered] Kashmir. This is my considered opinion.”
Asked what kind of action he was asking for, Haider said it should be both diplomatic and military, and that he conveyed this opinion to the Pakistani government, led by Prime Minister Imran Khan.
“If you do not have military force, a diplomatic action does not work.”
Pakistan and India have fought two of their three wars since gaining independence in 1947 over the mountainous territory of Kashmir, which both claim in full but administer separate portions of. The two territories are separated by a de facto border known as the Line of Control.
On February 26, 2019, India carried out air raids on Pakistani territory in Khyber Pakhtunkhwa province, with at least four bombs hitting a mountainside and farming village, causing no apparent casualties.
India claimed the raids killed “a very large number of [Jaish-e-Muhammad] terrorists, trainers, senior commanders and groups of jihadis”.
The Jaish-e-Muhammad armed group claimed responsibility for a suicide attack earlier in February last year that killed more than 40 Indian security personnel in the Indian-administered Kashmir town of Pulwama.
Diplomatic pressure
Since the air attacks, and the ensuing military standoff that saw Pakistan shoot down an Indian fighter jet, tensions have been high between the South Asian neighbours.
Shelling across the Line of Control killed at least 60 civilians in Pakistan-administered Kashmir in 2019, a marked uptick from previous years, according to Pakistani government data.
India says Pakistani shelling into Indian-administered Kashmir has also killed several civilians, although the government did not provide specific data.
In August, India revoked a special constitutional status for Indian-administered Kashmir, effectively absorbing the territory into its political and administrative mainstream.
The move was decried by Pakistan as unacceptable, given the territory is subject to a bilateral dispute.
Haider alleged India’s move to integrate the portion of Kashmir it controls was “an attempt to change the demography” of the region by allowing outsiders to migrate there.

Today in India we are seeing the Nazi-inspired RSS ideology take over a nuclear-armed state of over a billion people. Whenever a racist ideology based on hatred takes over, it leads to bloodshed.
— Imran Khan (@ImranKhanPTI) February 26, 2020

Haider said he submitted a proposal to Pakistan’s Foreign Office earlier this month to ramp up diplomatic engagement on the Kashmir issue.
“I have suggested that [the Pakistan-administered Kashmir government] open offices in the P5 countries [and in] Saudi Arabia, UAE, Malaysia, Indonesia, Iran and Turkey, as well as establish embassies in Geneva and EU headquarters at Brussels, and at the UN headquarters in New York,” he said.
“We need to work in these countries to save people from India’s fascist designs. [Indian Prime Minister Narendra] Modi is a new Hitler of the 21st century.”
Speaking in the same vein, Pakistani Prime Minister Khan on Wednesday criticised Indian police and security forces over violence in the capital New Delhi that has seen at least 24 people killed in sectarian attacks.
“Today in India we are seeing the Nazi-inspired RSS ideology take over a nuclear-armed state of over a billion people,” said Khan, referring to the right-wing Rashtriya Swayamsevak Sangh organisation, with which the ruling Bharatiya Janata Party is closely affiliated.
“Whenever a racist ideology based on hatred takes over, it leads to bloodshed.”
Haider said he was wary of US President Donald Trump’s repeated offers to mediate over the crisis in Kashmir.
“I am against the US mediation because it will always be in the favour of India,” he said. “They have interests in India. These days they have compulsions [regarding Pakistan] because of Afghanistan [and the peace process], but otherwise when would they ever take our side?”
Haider said he did approve, however, of the idea of international mediation in general as “it means that Kashmir is not being treated as an internal issue of India”.
Asad Hashim is Al Jazeera’s digital correspondent in Pakistan. He tweets @AsadHashim
Continue Reading…

Turkey vows to drive Syrian forces back from Idlib