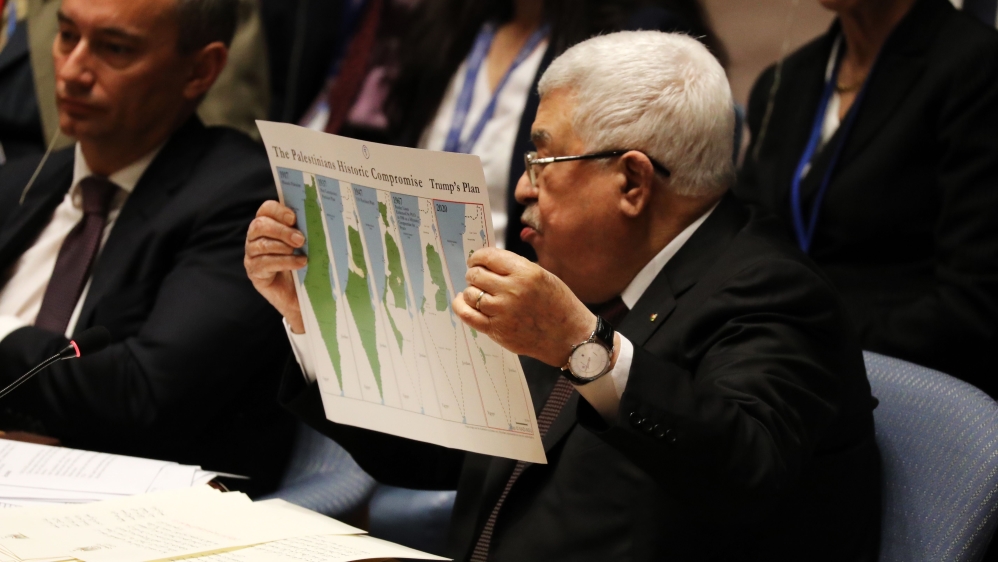 Palestinian Authority President Mahmoud Abbas has reiterated the Palestinians’ rejection of United States President Donald Trump’s so-called Middle East plan, telling the United Nations Security Council that the recently unveiled proposal would bring neither peace nor stability and would leave Palestinians with a state resembling “Swiss cheese”.
“I have come to you today to reaffirm the Palestinian position that rejects the Israeli-American proposal,” Abbas said in his address on Tuesday, noting that this stance had also been supported by the Arab League, the Organisation of Islamic Cooperation and the African Union.
More:

After Trump’s plan, what options do Palestinian leaders have?

Abbas called on Trump to return to negotiations based on existing UN resolutions that call for a two-state solution based on pre-1967 borders, and urged the council to hold an international conference to seek a settlement for the long-running conflict.
Abbas said the rejection of the plan, which Trump unveiled alongside Israeli Prime Minister Benjamin Netanyahu late last month, is the result of its “unilateral steps that violate international legitimacy and the Arab peace initiative”.
“It annuls the legitimacy of the Palestinian rights, our rights to self-determination, freedom, and independence, in our own state,” he said.
“It legitimised what is illegal – settlements and confiscation and annexation of Palestinian land,” he said, referring to Israel’s illegal settlement expansion project in the occupied West Bank and East Jerusalem.
The plan, the product of three years of effort by Trump’s son-in-law and senior adviser Jared Kushner, envisions a disjointed Palestinian state that turns over key parts of the West Bank to Israel and favours Israel on key contentious issues including borders, the status of Jerusalem and Jewish settlements.
Under the proposal, the Palestinians would have parts of the West Bank and Gaza for their state and a new capital in Abu Dis, a suburb just outside Jerusalem. But the Palestinians want both occupied East Jerusalem and the West Bank to be part of a future state.
The proposal was made without the input of Palestinians, who broke off ties with the Trump administration after it controversially recognised Jerusalem as the capital of Israel in late 2017.

A draft resolution, cosponsored by Tunisia and Indonesia and backed by the Palestinian delegation, had said Trump’s plan violates international law and Security Council demands for a two-state solution based on the borders of Palestine before the 1967 war.
It would have expressed the council’s determination “to examine practical ways and means to secure the full implementation of its relevant resolutions, including enforcement measures under Chapter 7 of the [UN] Charter,” which cover military and nonmilitary means.
But it appeared unlikely that the Palestinians would have enough support in the council to put it up for a vote amid reports the draft resolution was put on hold following US pressure.
Al Jazeera’s James Bays, reporting from the UN headquarters in New York, said the Palestinians and their allies may have “misplayed their hands”.
“Certainly their early draft of the resolution was very critical of the Trump plan, and I think that was what forced the Americans to ring up the Tunisians to sack their ambassador,” Bays said, referring to Tunisia’s former UN envoy Moncef Baati, who was reportedly fired last week for going further than President Kais Saied wanted in his criticism of the US proposal.
“It also caused concern among other UNSC countries. I think what the Palestinians didn’t want was to put a resolution to a vote, and have not just the US on one side, but have more countries abstaining,” Bays said, referring to the absence of a vote.
Palestinians ‘not hopeful’
In his speech, Abbas reiterated that peace between the Palestinians and Israelis “is still possible” and “achievable”.
“We are still committed to peace as a strategic choice, but this deal is not an international partnership,” he said.
Meanwhile, Israel’s ambassador to the UN, Danny Danon, accused Abbas of being unrealistic.
“President Abbas refused to be pragmatic. He refuses to negotiate. He is not interested in finding a realistic solution to the conflict,” Danon told the Security Council.
His comments came as thousands of Palestinians from different parts of the West Bank gathered in Ramallah to voice their support for their leadership’s position and to protest again Trump’s plan.
Al Jazeera’s Nida Ibrahim, reporting from Ramallah, said the outpouring of support for Abbas’s speech came despite many Palestinians feeling hopeless.
“They say they’ve been promised for years … not any one resolution they say has been implemented on the ground,” Ibrahim said.
“From the expansion of settlements, the US embassy move … they don’t seem to be holding much hope. Palestinians are not hopeful that the reality on the ground is going to change,” she said.
“Palestinians believe Israel is already moving forward with the plan, and that what the US has done is just put facts on the ground on a piece of paper and called it a peace plan.”
Continue Reading…