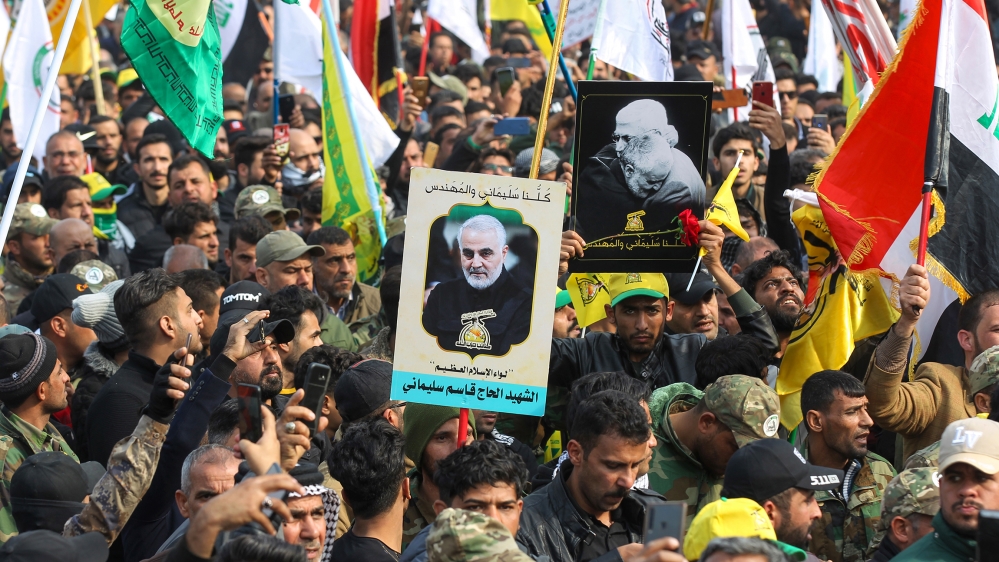 Baghdad, Iraq – On January 3, soon after Iranian General Qassem Soleimani left Baghdad airport in an armoured vehicle, a US drone fired rockets at his convoy, killing the commander of the Islamic Revolutionary Guard Corps (IRGC) and the Iraqis accompanying him.
The brazen assassination sent shockwaves through the Middle East and beyond, triggering fears of an all-out war between the United States and Iran in Iraq, where the two foes compete for influence.
Iran did choose Iraqi soil to retaliate, sending a volley of missiles at two bases hosting US forces outside Baghdad and Erbil. The attacks on January 8 ended without any fatalities, however, easing worries of a regional conflagration. As the smoke clears, what is worrying observers in Iraq is the death of the powerful Shia militia leader, Abu Mahdi al-Muhandis, who was killed in the same US strike targeting Soleimani.
His killing leaves the paramilitary he commanded – the Popular Mobilisation Forces (PMF) – without a clear successor, throwing the future of the 100,000-strong force into uncertainty and raising new concerns over instability in war-ravaged Iraq. The leadership vacuum is also likely to weaken Tehran’s hand in Iraq, according to experts.
More:

The PMF, or Hashd al-Shaabi, was formed in 2014, in response to a fatwa by Iraq’s most influential Shia leader, Ayatollah Ali al-Sistani. The religious leader had put out a call for volunteers to take on ISIL (ISIS) after the Sunni armed group conquered more than a third of Iraqi territory.
Al-Muhandis, the widely used nom-de-guerre for Jamal Jaafar al-Ibrahimi, was “the creator of the PMF, its over-seer”, said Sajad Jiyad, managing director of Baghdad-based think-tank al-Bayan. With military backing from Soleimani’s Quds Force, al-Muhandis helped unite the group of 50 disparate militias – most of them Shia fighters – into an effective force against ISIL.

A fluent Farsi speaker who spent most of his adult life in Iran, al-Muhandis was the dominant administrator in charge of handling logistics, supply, personnel administration and coordinating the various competing factions of the PMF – many of whom had a history of conflict with one another and represented a range of allegiances, including to Iran’s Supreme Leader Ayatollah Ali Khamenei and the powerful Iraqi nationalist and Shia leader, Moqtada al-Sadr.
While Iran-aligned groups likely constitute a minority in the PMF’s total number of fighters, al-Muhandis’s command of the umbrella group gave Iran an influential stake in its affairs, according to the International Institute for Strategic Studies (IISS), a London-based think-tank.
Some experts contend it was Iranian pressure that pushed Iraq’s government to incorporate the PMF into the state’s security apparatus in 2016, a move that provided the militia with heavy weaponry and significant financial resources. In 2019 alone, the group was allocated $2.16bn from the Iraqi state budget.
Al-Muhandis played a key role in the process. “He bought a visionary aspect to the PMF. He saw it not just as an organisation or state-sanctioned business, but more as a system relying on feedback loops, he understood the dynamics underlying the different divisions within the organisation,” said Inna Rudolf, research fellow at the United Kingdom-based King’s College, London.
‘Perilous time’
In recent years, the PMF has also grown into a powerful political faction, with politicians aligned to the militia taking the most seats in Iraq’s parliament in the 2018 legislative elections. Politicians from the Iran-allied factions in the PMF won 48 seats, coming in second behind al-Sadr’s Sairun alliance, which took 54 in the 329-member assembly.
The force’s political and military clout has worried Washington, which has thousands of troops in Iraq to prevent a resurgence of ISIL, which was defeated in 2017.
And as US-Iran tensions escalated last year – in the aftermath of US President Donald Trump’s pulling out of the Iran nuclear deal and reimposing punishing sanctions on Tehran – the US army and the PMF accused the other of attacks on their positions in Iraq.
The long-simmering hostilities boiled over late last year when a rocket attack on an Iraqi base hosting US troops killed an American defence contractor. Washington blamed the incident on Kataib Hezbollah, a militia founded by al-Muhandis, and carried out air raids on the group’s bases in Syria and Iraq, killing 24 of its fighters. Days later, on December 29, PMF supporters stormed the US embassy, prompting a severe diplomatic crisis that culminated in the US killing of Soleimani.

A woman wears the words ‘powerful revenge’ on her hand, in a southern suburb of Beirut, Lebanon, Sunday, January 5, 2020 following the US air strike in Iraq that killed Qassem Soleimani and Abu Mahdi al-Muhandis [Maya Alleruzzo/ AP]

It is not clear if the US intended to kill al-Muhandis in the same attack, but the dramatic US escalation makes for “perilous times for Iraq’s Shia militias”, said Ranj Alaaldin, fellow at the Brookings Institute in Doha, Qatar.
The heavily armed groups fear “becoming displaced or weakened by rivals”, said Alaaldin, predicting a contentious succession battle pitting Iran-aligned groups that dominate the PMF against al-Sadr’s bloc.
Tehran has a lot at stake. The main contender from the pro-Iranian faction is Hadi al-Amiri, a former transport minister and the head of the Badr Organization, which forms the backbone of the PMF. Al-Amiri is a fluent Farsi speaker and an admirer of Soleimani, and thus likely to prioritise Iran’s interests, according to observers. Al-Sadr, however, has long opposed both US and Iranian influence in Iraq.
The uncertainty hanging over the PMF presents a rare opportunity for the US to curb Tehran’s hold over Baghdad, said one Iraqi diplomat who spoke to Al Jazeera on the condition of anonymity.
“Since Qassem Soleimani was killed, Iranian influence has lost the aggressiveness, the expansionist idea it used to have. So we have three or four years for a functional US policy in Iraq, after that, we’ll go back to how it was before Soleimani’s death, so it’s now or never to do something to confront the Iranian influence in Iraq.”

Public opinion, too, appears to be turning against the PMF. There have been calls to disband the group from protesters who have taken to the streets across cities in Iraq since October. Many question the value of the group in the wake of ISIL’s defeat, while human rights groups have accused some groups of war crimes and extortion in some of the areas they took back from ISIL.
Yet, others said any attempts to sideline the group could provoke a backlash given its entrenchment in the Iraqi state. “Can you just suddenly clamp down on this behaviour? It’s very difficult to do without leading to violence and blowback,” said Jiyad of al-Bayan.
For now, despite the lack of a figurehead, the PMF appears to be united.
Its various factions have promised to avenge al-Muhandis’s killing by expelling US troops from the country. On January 13, al-Sadr held a meeting in the Iranian city of Qom to coordinate the PMF’s efforts to expel US forces. In attendance were the leaders of several militias, including Kataib Hezbollah, Asaib Ahl al-Haq and Harakat Hezbollah al-Nujaba.
The groups have now announced a “million-man march” against the US’s military presence for Friday.
Meanwhile, PMF-aligned legislators pushed through a resolution on January 5 ordering caretaker Prime Minister Adel Abdul Mahdi’s government to end US military presence in Iraq – something Washington has opposed vehemently.
Abu Hadi al-Daraji, spokesman for the PMF, told Al Jazeera the group would remain a force in Iraq.
“As long as the Iraqi army, and the Iraqi police force are legitimate forces under the control of the Iraqi government, the Hashid Shaabi will be too,” he said. “It’s a legitimate organisation.”
Gareth Browne reported from Baghdad. Zaheena Rasheed reported from Doha
Continue Reading…