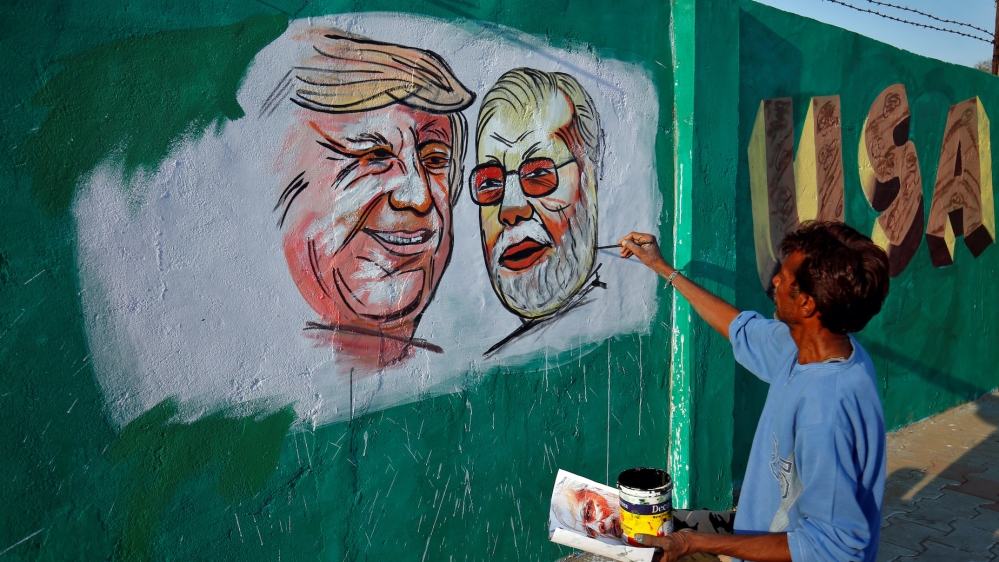 Ahmedabad, India – Donald Trump is on his maiden visit to India, and his first stop is the western state of Gujarat, the home of Prime Minister Narendra Modi, who has pulled out all stops to woo the US president.
The trip comes as the two countries have failed to agree on a trade deal as Trump, who has made trade a cornerstone of his diplomacy, has demanded New Delhi open up its market for more American goods.
More:

New citizenship law protests in India ahead of Trump’s visit

As Trump heads to India, a trade deal appears elusive

As India’s growth has slumped in recent years, the Hindu nationalist government has turned protectionist and raised tariffs that have irked the Trump administration.
“We’re not treated very well by India, but I happen to like Prime Minister Modi a lot,” the US president said before the trip.

President Trump has hinted there will not be a trade deal during the trip as his administration has been trying to reduce its $25bn trade deficit with India. Bilateral trade between the two countries is worth $142bn.
However, a deal worth $2.6bn to buy attack helicopters from US defence firm Lockheed Martin might be finalised during the trip, according to media reports.

Analysts say Modi would like to use his personal chemistry with Trump to smooth over the differences in trade.
On Monday, the Indian prime minister tweeted: The “visit is definitely going to further strengthen the friendship between our nations. See you very soon in Ahmedabad.”
Highlight of the trip
Analysts say the highlight of the trip will be the joint Modi-Trump address to an audience of more than 100,000 at a cricket stadium in Ahmedabad for the first leg of the trip, which comes in an election year.
They say the trip is high on optics and Trump will use the occasion to woo nearly 2.5 million Indian American voters.

BackPage 1 of 2Next →
In this article:Political, spectatorship'