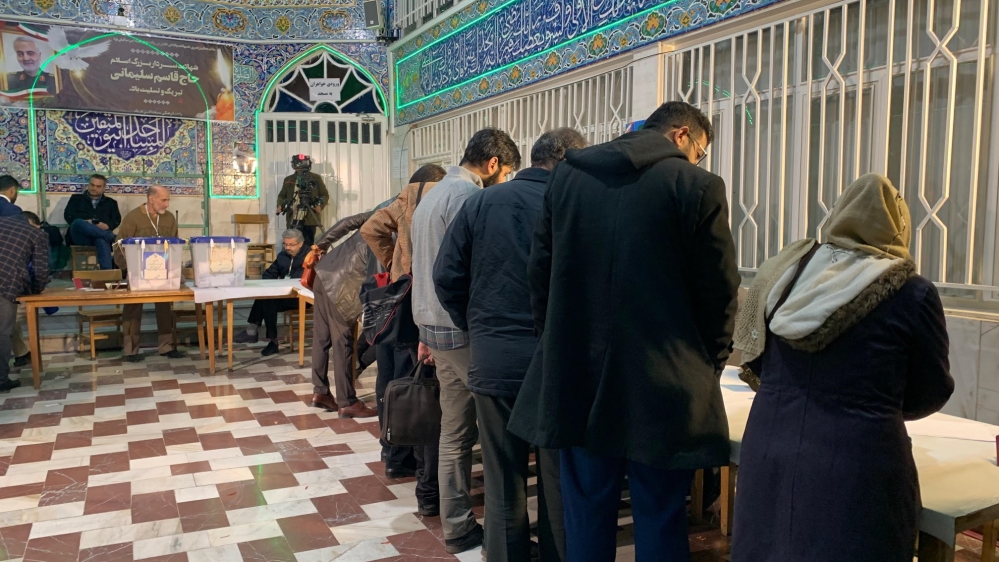 Tehran, Iran – Polls closed in Iran’s 11th parliamentary election, seen as a test for the popularity of President Hassan Rouhani’s reformist-moderate camp as hardliners were expected to make gains.
Elections for Iran’s 290-member parliament were set amid escalating political tensions, economic struggles, and concerns about low participation. The spectre of the coronavirus infection that has killed at least four people in the country also added another layer of uncertainty to the electoral process.
The vote also took place as the world’s top anti-terrorism monitoring group, the Financial Action Task Force (FATF), voted to keep Iran on its blacklist for failing to tackle “terrorism” financing.
More:

Why Iran’s reformists are likely to lose parliamentary vote

Voters on Friday also chose replacements for seven deceased members of the Assembly of Experts, a clerical body responsible for appointing the supreme leader.
As of 3pm local time (11:30 GMT), 11 million of nearly 58 million people eligible to vote had taken part in the election, according to the Ministry of Interior, which did not provide further updates.
The vote took place on preselected lists of candidates that represent more than 250 registered parties.
A total of 55,000 polling stations were opened at mosques and schools throughout the country. More than 7,000 candidates, including at least 666 women, were competing.

Iran: Thousands of candidates disqualified ahead of elections

Long queues could be seen at the main polling station set up at Masjid al-Nabi, the main mosque in the middle-class Narmak neighbourhood where former president Mahmoud Ahmadinejad lives.
Throughout the capital Tehran, other hubs for the conservative camp, also known as the principlists, were teaming with voters for several hours of the day.
Meanwhile, stations in other areas including parts of northern Tehran, a support base for the reformists, remained empty throughout most of the day.
Polls were expected to close at 6pm (14:30 GMT) but were extended several times. During the previous parliamentary elections in 2016, voting was extended because of the high turnout.
A spokesman for the Guardian Council, Abbas Ali Kadkhodaei, said in a statement that 200,000 supervisors from the council oversaw the polls throughout the country.
On the eve of the election, the United States imposed sanctions on five senior Iranian officials for allegedly preventing fair-and-free elections in Iran, the US Department of the Treasury said on Thursday. The blacklisted officials included Secretary of Iran’s Guardian Council Ayatollah Ahmad Jannati and its spokesman Abbas Ali Kadkhodaei.

Advertisement. Scroll to continue reading.
BackPage 1 of 2Next →
In this article:Iranian, Polls